South Pacific, Rodgers & Hammerstein’s legendary 1949 musical about American military personnel and their interaction with Polynesian natives during World War II, proved to be a hit at the Blossom Music Festival on Saturday evening, August 24. The lawn was packed and the pavilion was mostly sold out. The semi-staged production was a collaboration between The Cleveland Orchestra and Baldwin Wallace University’s Music Theatre Program. BW’s Victoria Bussert directed the staging, in which the singing actors performed in front of The Cleveland Orchestra (in slightly reduced size, although generous for a Broadway pit band). Andy Einhorn kept a tight rein on the musical proceedings, always keeping momentum up, and giving us the added pleasure of hearing details of Robert Russell Bennett’s orchestrations.

The principals, a mix of BW students and seasoned Broadway and opera professionals, carried scripts, relying to different degrees on the written page. Students filled out the chorus of American nurses and Seabees.

Based on a book of related stories by James Michener, the 1949 musical dealt with such controversial issues as interracial marriage and racism at its premiere. Racism is, of course, still with us, and the story is still relevant in the Me Too era, with hints of sexual exploitation of a young Tonkinese girl by an American naval officer.

The original production featured Broadway star Mary Martin and Metropolitan Opera bass Ezio Pinza. Martin was famously afraid of being drowned out by Pinza’s powerful voice; Rodgers and Hammerstein obliged her concerns by having the two leads almost never singing simultaneously. (This was, after all, before the ubiquitous electronic amplification of everything.) Such concerns did not pertain here, with everyone fully audible, although there were a few dropouts in sound when actors moved from one microphone to another. The orchestra was mixed smoothly into the overall sound feed.

BW student Kailey Boyle played American nurse Nellie Forbush, who falls in love with the exiled French plantation owner Emile de Becque, sung by operatic baritone Elliot Madore. After a few nerves at the beginning, Boyle settled into a beguiling, earnest performance as the girl from Little Rock, with a lovely light Broadway soprano and an easy stage presence. This was a high-pressure assignment for an undergraduate, and one in which she succeeded beautifully.

Elliot Madore made his Cleveland Orchestra debut in 2017 in the title role of Debussy’s Pelléas et Mélisande, which was written for a tenor but is often sung by a high lyric baritone. The role of de Becque was written for a true operatic bass, and although Madore has the matinée-idol good looks for the romantic lead, he had to force his sound, particularly in the lower range. Although it may have been a good idea to cast a de Becque only a few years older than Nellie, despite his efforts, Madore was musically only partially successful.

Bloody Mary, the local woman upon whom much of the action depends, was brilliantly played by Loretta Ables Sayre, reprising her role in the highly successful 2008 Lincoln Center Theater revival of South Pacific. She made the character her own, with a combination of Gospel belting and ravishing soft phrases. There were hints of darkness in her interpretation, especially in offering her daughter Liat (a non-speaking role played by Hanako Walrath) to the handsome American Lieutenant Joseph Cable, played by Broadway veteran Ryan Silverman.

Silverman was much more dependent on his written script than others. His portrayal of the young American torn by his interest in the Asian girl and the knowledge of the prejudice she would encounter if he took her to America seemed not fully developed. His ringing tenor was passionate in its middle range, but turned strident in high passages. 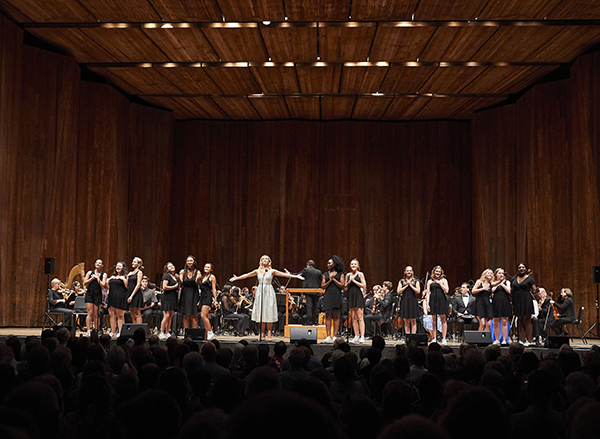 Of the supporting characters, BW student Gordia Hayes was often very funny as Luther Billis, the Seabee who can work the Navy system to get what people need. He showed humor and potential as a comic actor, but he often seemed left to his own devices, especially dressed in grass-skirt drag in the “Honey Bun” number, where his fall-back gesture was to clutch his coconut shell “breasts.”

There was a bit of the absurd in casting a woman, BW student Milla Guerra, as U.S. Navy Captain George (or, as in the program, “Georgia”) Brackett. South Pacific is set in a locale and time when women captains simply did not exist. Brackett is a comic character, a subtle point that Guerra did not take advantage of in her stentorian orations. As with Gordia Hayes’s Luther Billis, Guerra seemed to lack direction.

The principal characters were costumed in various formal attire, from Nellie’s cocktail dress to Bloody Mary’s lavish blue floor-length gown and diamond necklace. The chorus of Seabees wore black tank tops and trousers, and counterintuitively the nurses were clad in black tennis/cheerleader outfits, rather than hospital white.

There were many fine things — especially musically — about this production. The disappointments were allayed somewhat by seeing the potential of the student actors. The collaboration between students and professionals made this South Pacific an experiment worth doing again.

Franz Schmidt’s Symphony No. 4 showcased the ensemble, under guest conductor Jonathan Berman, in the standard conventions of a not-so-standard piece. But at the start of the program, the musicians were equal partners to pianist Cédric Tiberghien, whose playing could be as bold as the full orchestra or as intimate as any instrumental solo. END_OF_DOCUMENT_TOKEN_TO_BE_REPLACED

END_OF_DOCUMENT_TOKEN_TO_BE_REPLACED

Jackson began the program with a recitation of Langston Hughes’ poem “Helen Keller” — the first of five poems by Hughes that served as interludes between each piece on the first half. END_OF_DOCUMENT_TOKEN_TO_BE_REPLACED

Pianos with pins and tape on strings, a bass drum and tam tam, crotales, Almglocken, and vibes. Microphones were hooked up all around the instruments. The feed was sent to speakers around the room. Lighting designer Nicholas Houfek hung incandescent globes over the arrangement of instruments from thin black wires stretching across the beams. END_OF_DOCUMENT_TOKEN_TO_BE_REPLACED

From the podium, Elim Chan set an ambitious tone for the evening. The rising star conductor, here in her Cleveland Orchestra debut, has a commanding style, and every twist and turn in Saturday’s performance tracked closely with her baton. END_OF_DOCUMENT_TOKEN_TO_BE_REPLACED