Although it wasn’t the original plan to go online last weekend for the final round of the James Stroud Classical Guitar Competition, moving to a digital format suited the event well. Young performers Aytahn Benavi, Patricia Hernandez, Ian Tubbs, and Eric Wang played in the intimate setting of their own homes, giving everyone who tuned in a front row seat.

The finals of the James Stroud Competition for high school students 14-18 began and ended in Mixon Hall at the Cleveland Institute of Music on Friday, October 16. The founder introduced the four remaining contestants before their pre-recorded performances, and awarded cash prizes afterward. Then, as though on a Google Earth quest, watchers were swept away to Austin, Miami, Bloomington, and San Jose to hear one-take, 20-minute sets of works selected by the contestants. The Competition was held in cooperation with the Cleveland International Classical Guitar Festival. 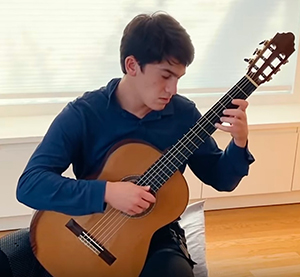 Texan Aytahn Benavi, 18, played Dionisio Aguado’s Rondo No. 2 with expressive fluency and fine dynamic contrasts, and Vincente Asencio’s colorful and witty La Joia with calm pacing even in its florid runs. In between, he programmed The Joyful Island, a piece conceived and written for him by Angelo Gilardino. It begins with promising fragments of melody that gradually come together, leading to a lyrical middle section where the music frays into pointillistic gestures, then starts up again. Benavi played it as if he owns it — which he does. 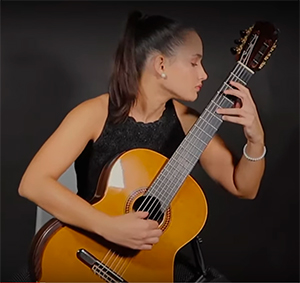 Floridian Patricia Hernandez, 16, began with an understated reading of John Dowland’s Fantasia No. 7, its runs smooth and its cadenza-like sections lively. Her performance of Johann Kaspar Mertz’s Fantasia Hongroise was elegantly expressive, and Mauro Giuliani’s Grand Overture brilliant and tuneful. Her reliable technique served her well in all three pieces, although a more extroverted playing style could have given more profile to the music. 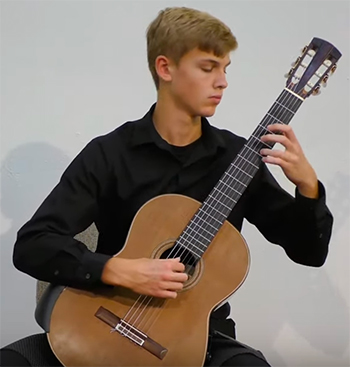 Indianan Ian Tubbs, 15, chose a varied program of four works, beginning with a well-paced performance of J.S. Bach’s Prelude and Presto from the e-minor Suite. He also programmed the Mertz Fantasia Hongroise, giving it a clear and tidy reading whose melodic lines sometimes needed more direction. He played the first of William Walton’s Five Bagatelles with efficient charm, ending his set with a piece full of extended techniques: Nikita Koshkin’s amusing “Playing Soldiers” from The Prince’s Toys. Tubbs’ fine technique was on full display in the last work. 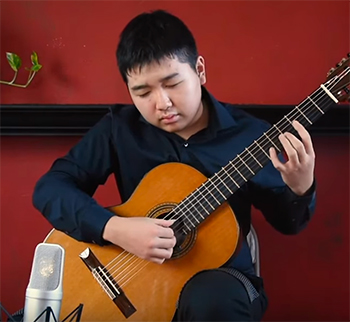 Californian Eric Wang, 16, began where Tubbs left off. Constructing his program like a three-movement sonata, Wang led off with the first movement of Koshkin’s Sonata No. 2, going on to the middle movement of J.S. Bach’s Prelude, Fugue, and Allegro, then to the finale of Manuel M. Ponce’s Sonata Romantica. Though he has the tendency to hunker down and disappear behind his instrument, Wang’s inherent musicality served him well in all three selections. The Bach fugue was particularly impressive for his sense of layering, which brought the contrapuntal lines out clearly.

Although the final round videos were homemade, the contestants and their technical assistants (usually a parent or two) did a fine job of staging and lighting them, and the sound quality was uniformly excellent.

At the end of the evening, the panel of judges — Stephen Aron, Mark Delpriora, Matteo Mela, Lorenzo Micheli, Nigel North, Marco Sartor, and Jason Vieaux — reported their decision, and James Stroud announced the order of winners. First Prize went to Aytahn Benavi ($10,000), Second Prize to Eric Wang ($5,000), Third Prize to Patricia Hernandez ($2,500), and Fourth Prize to Ian Tubbs ($1,250). Stroud also awarded a special $500 prize to Hernandez as the finalist who had shown the most improvement over the course of the contest. The final round performances can be viewed here.

Jackson began the program with a recitation of Langston Hughes’ poem “Helen Keller” — the first of five poems by Hughes that served as interludes between each piece on the first half. END_OF_DOCUMENT_TOKEN_TO_BE_REPLACED

Pianos with pins and tape on strings, a bass drum and tam tam, crotales, Almglocken, and vibes. Microphones were hooked up all around the instruments. The feed was sent to speakers around the room. Lighting designer Nicholas Houfek hung incandescent globes over the arrangement of instruments from thin black wires stretching across the beams. END_OF_DOCUMENT_TOKEN_TO_BE_REPLACED

From the podium, Elim Chan set an ambitious tone for the evening. The rising star conductor, here in her Cleveland Orchestra debut, has a commanding style, and every twist and turn in Saturday’s performance tracked closely with her baton. END_OF_DOCUMENT_TOKEN_TO_BE_REPLACED