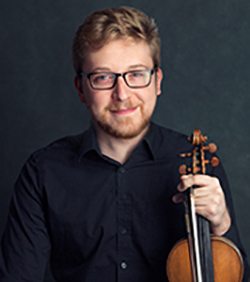 The November 9 concert by the Canton Symphony Orchestra was a particularly eclectic program of five works exploring the theme of storytelling, beginning with Mozart’s Overture to The Marriage of Figaro. In the genre of opera buffa, there’s hardly a more scintillating curtain raiser than this madcap orchestral frolic. The fast-paced music is replete with crisply punctuated rhythms and many shifting colors, and the ensemble played it impeccably.

Following this invigorating romp into unfettered jollity, the musical temperament shifted dramatically with Concerto Dei Fiori (Concert of Flowers), a one-movement piece for violin and chamber orchestra composed in 1996 by Sylvie Bodorová. In the course of her career spanning from the late 1970s, she has become one of the most sought-after and performed champions of contemporary Czech musical culture.

Concerto Dei Fiori is a piquant melding of moods, at once somber and sweet, tumultuous and meditative. All of the work’s thematic tensions were articulated here with mesmerizing panache in a sensitive dialogue between the small ensemble and the featured soloist, concertmaster Cristian Zimmerman (above) . His remarkably fluid playing was imbued with an emotive intensity that very effectively evoked the music’s sensations of wandering and discovery, of slowly ascending from brooding darkness to blossom in the promise of light.

Zimmerman’s electrifying cadenza nearly midway through, pierced by savage dissonances, was a grand unleashing that gave way to stratospheric high notes, finally ushering in a stately hush as the ensemble quoted J.S. Bach’s Cantata No. 180, Schmücke dich, o liebe Seele : “Adorn yourself, beloved soul, leave the dark den of sins, come into the clear light, begin to shine with glory…”

Following that gorgeous moment of found serenity was a story of a different sort — Samuel Barber’s Knoxville: Summer of 1915, for soprano and small orchestra. Barber set this fascinating work — perhaps best called a free-form operatic poem, or “word painting” — to text written by American poet and novelist James Agee (1909-1955).

The words form a distinctly dreamlike remembrance of a sultry summer evening, presented from the perspective of a child, and made all the more enchanting here thanks to the rhapsodic intonations of soprano Hilerie Klein Rensi.

Beyond the sheer radiance of her actual singing, which was often inflected with a lilting, conversational timbre, Rensi’s performance was suffused with a captivating theatrical expressivity. She seemed to float effortlessly between wistful moments of wide-eyed, childlike wonder and the more bittersweet musings, implicit in the text, of an adult all too aware of mortality and impending sorrow. Throughout, the ensemble invested Barber’s seductive and haunting melodies with a crystalline, even magical dimensionality.

The concert ended, as it began, on a dazzlingly felicitous note, this time with Zoltán Kodály’s Dances of Galánta. This lavishly orchestrated work is a rambunctious Hungarian rondo with special attention given to the clarinet. The orchestra rose to the moment with all the lush sonority and clarity we’ve come to expect from this accomplished body of gifted artists. Yet interestingly enough, it was the performance of the work preceding this enthralling climax that remains in my mind as the most extraordinary musical encounter of the evening — Aaron Copland’s Appalachian Spring Suite.

Music Director Gerhardt Zimmermann introduced this eminently familiar American classic — which I’ve always heard played by large orchestras — with a humorous and touching reminiscence about meeting, knowing, and savoring Aaron Copland. Then he faced his ensemble, now pared down to a scant 13 pieces (as originally performed in 1944) and proceeded to essentially transcend mere familiarity.

You’d think that with such a small group of players, the scope and depth of Copland’s idyllic vision would be somehow diminished. Instead, they simply proved that less can in fact be more. ‘Tis the gift to be simple indeed. I’ve never heard this iconic work performed with more genuine emotional sensitivity, more sweeping lyrical elegance, than on this occasion. What was old had become new again. Better than beautiful, it was sublime.

Jackson began the program with a recitation of Langston Hughes’ poem “Helen Keller” — the first of five poems by Hughes that served as interludes between each piece on the first half. END_OF_DOCUMENT_TOKEN_TO_BE_REPLACED

Pianos with pins and tape on strings, a bass drum and tam tam, crotales, Almglocken, and vibes. Microphones were hooked up all around the instruments. The feed was sent to speakers around the room. Lighting designer Nicholas Houfek hung incandescent globes over the arrangement of instruments from thin black wires stretching across the beams. END_OF_DOCUMENT_TOKEN_TO_BE_REPLACED

From the podium, Elim Chan set an ambitious tone for the evening. The rising star conductor, here in her Cleveland Orchestra debut, has a commanding style, and every twist and turn in Saturday’s performance tracked closely with her baton. END_OF_DOCUMENT_TOKEN_TO_BE_REPLACED