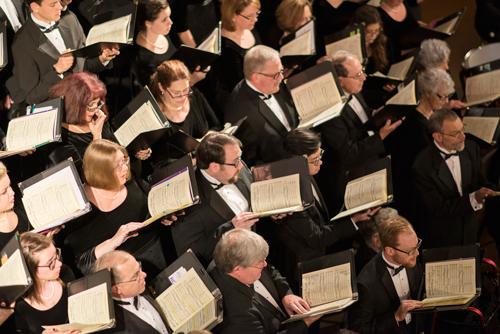 The concert, performed without intermission and lasting 75 minutes — the perfect length for a Sunday afternoon performance — was graced by the expert support of members of the Akron Symphony and a superb vocal quartet (soprano Kathryn Papa, mezzo-soprano Chelsea Lyons, tenor Corey Shotwell, and bass Frank Ward, Jr.), all of whom added an extra layer of sheen to the occasion.

In a preview for this publication, Bucoy-Calavan said she chose Brahms’s Song of Destiny to share the program with the Mozart Requiem because of its theme of fate that links up with all the legends surrounding the composition of Mozart’s work. It was a good choice, dramatically and stylistically, even if Friedrich Hölderlin’s verses don’t bode well for the future of mankind. (“We vanish, we stumble / We suffering, sorrowing mortals / Blindly from one / Brief hour to another / Like water from boulder / To boulder flung downward / Year by year to the dark / Unknown below.”) 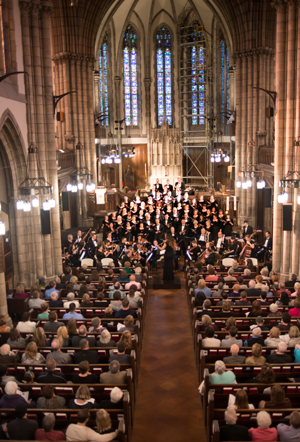 The new artistic director paced the work sensitively, making a dramatic transition into its center section and returning wistfully to its opening material. The Masterworks Chorale, numbering 35 women and 19 men, produced a full, balanced sound. The choral climaxes were thrilling. One could only have wished for a bit more shape to the orchestral introduction — and a little more prominence from the timpani part, which serves to underline the idea of inexorable fate.

By contrast to Brahms’s fatalism, Mozart’s Requiem was almost positive in affect — and cheerful in its pacing. Bucoy-Calavan moved the Introit forward and set a brisk pace for the Kyrie fugue. The Chorale was happy to oblige her, singing with energy and accuracy. 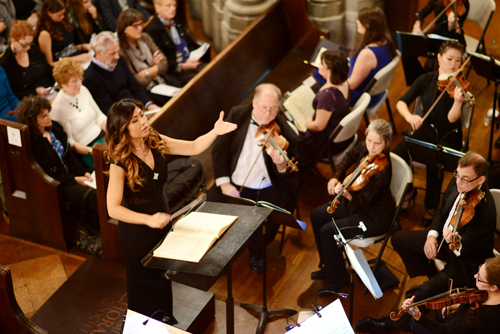 The Sequence was appropriately frightening in its opening “Dies irae,” profound in its “Tuba mirum,” majestic in its “Rex tremendae,” where the Chorale kept its dotted rhythms precise, and comforting in its “Recordare.” In their own sections, the solo quartet shone both individually and as an ensemble. Bucoy-Calavan shaped striking dynamic contrasts in the “Confutatis” and, after a somewhat awkward pause, fine legato singing in the “Lacrimosa.”

The conductor’s preference for quick tempos made the “Domine Jesu” of the Offertory sound a bit frantic, and parts of the fugue almost came unglued. “Hostias” brought forth a beautiful blend from all the vocal forces. The return to “Quam olim Abrahae” was even a tick faster than its first iteration. 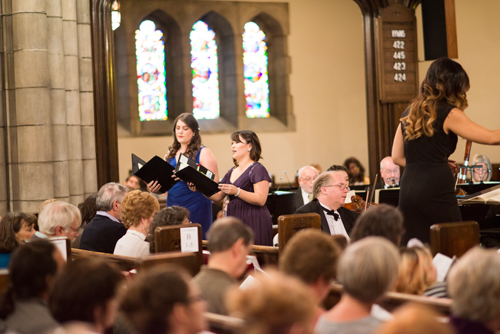 The Sanctus and Benedictus were missing from the program book, but happily, not from the scores of the chorus, soloists, and orchestra. The Sanctus sounded full and brilliant, and the Benedictus featured a lovely blend between the solo quartet and winds. If the Agnus Dei was faster than that of many performances, it still made its impact, especially at the point where it seems to run out of emotional steam and transitions magically into the “Lux aeterna.” After that, the Requiem returns to the music with which it began, but with new words: “Grant them eternal rest…with your saints in eternity, because you are merciful” — a nice connection with All Saints Day, which Christians celebrate each year on November 1. 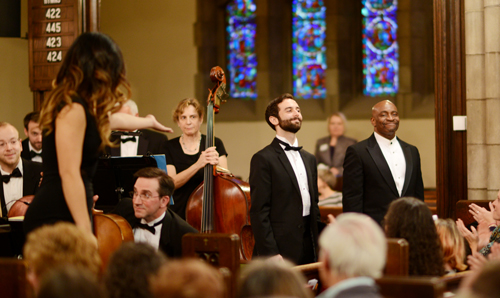 All the groups that make up the Summit Choral Society will join together for three Candlelight Concerts at St. Bernard’s Church on December 18, 19, and 20. The Masterworks Chorale will strike out in a new direction for its spring concert on April 10. “Dance with me” at the Tangier Ballroom will feature choral dance music (including Brahms’s Liebeslieder Waltzes) in cooperation with Viva Dance.

END_OF_DOCUMENT_TOKEN_TO_BE_REPLACED

Franz Welser-Möst led the final bows on Saturday night at Severance, like the star of any show should. The Cleveland Orchestra’s music director is in his element presiding over the ensemble’s annual opera production, which this season packs the drama. Verdi’s Otello — in a concert staging that opened May 21 and runs for two more performances (May 26 and 29) — demands big voices, instrumental forces to match, and a conductor who can give it all shape and direction. END_OF_DOCUMENT_TOKEN_TO_BE_REPLACED

The cimbalom was the feature of the show, an instrument capable of taking on many personas. Its performer, Chester Englander, has shaped his career around the instrument, and has inspired composers to write more repertoire for it, some of which was presented on the program. END_OF_DOCUMENT_TOKEN_TO_BE_REPLACED