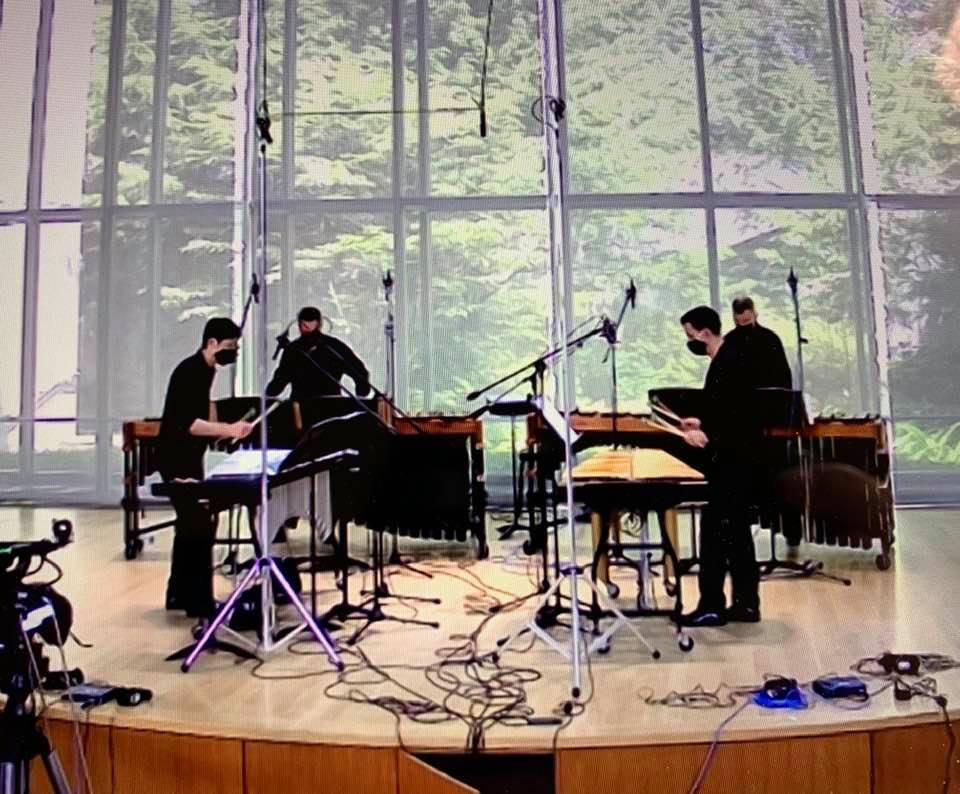 With the absence of Northeast Ohio’s annual feast of live summertime classical music offerings, I’m thankful that we live in a time when technology can help fill the void in the artistic soul. That technology can also take you to far-off festivals that you’ve always wished you could attend, but never have had the opportunity.

From Monday, July 27, to Wednesday, August 19, you can attend the 36th annual Sun Valley Music Festival Summer Season for free from the comfort of your own home, or backyard. The free, one-time-only webcasts were developed by Festival Music Director Alasdair Neale in collaboration with Creative Director James Darrah, who served as stage director for The Cleveland Orchestra’s 2015 production of Richard Strauss’ Daphne. 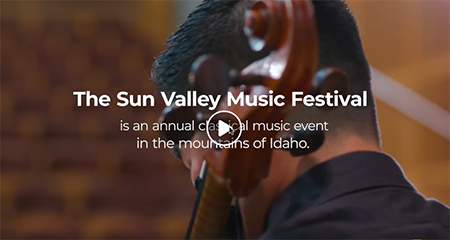 Watch a video about the festival here.

During a recent telephone conversation, Si-Yan Darren Li said that this year would have been his second summer at Sun Valley Music Festival, “Unfortunately COVID-19 happened, and it’s too bad because I was looking forward to going — it’s such a gorgeous place.”

Li said he was delighted that the Festival decided to feature him and Damoulakis on Tuesday’s program. He soon began searching for cello and percussion repertoire and discovered Mariel. “I listened to it and thought, this is beautiful. Golijov’s music is always accessible. His harmonies, sound world and imagination are wonderful and you don’t need to study the score to appreciate it. I mentioned the piece to Marc who said he had played it once before and spoke very highly of it.”

This was the first time the two musicians had collaborated on a piece of chamber music. It was also Li’s first time working with a marimba. “We clicked right away, and the rehearsals were fun,” Li said. “I feel very lucky because Marc is one of the best in the country — and the colors he can get from the marimba are very special — so my first experience was really great.”

During a separate telephone conversation, Marc Damoulakis said that he had been going to the Festival since 2003. “I took a break because of Blossom when I got the Cleveland Orchestra job. But I think I started going back in 2012.”

When asked about the music of Reich, Damoulakis said that percussionists are lucky to have him. “He’s given us so much contemporary chamber music and they are now all standards in the repertoire.”

Damoulakis said that while a five-octave marimba would have been larger than usual in the 80s and perhaps the early 90s, the instrument has now become standard. “We have one at the Orchestra, and every major music educational institution has multiple instruments. It goes down to the low C on the cello, so you can play the Bach cello suites in the correct octave.”

The percussionist noted that it takes a tremendous amount of mental focus to play the repetitiveness that is common in Reich’s music. “The two marimbas are hocketing back and forth the entire time, and the two vibraphones are always playing the same part displaced by one beat, so we are playing in canon.”

The Quartet was fortunate to have had the opportunity to perform the piece back in February during Sun Valley’s Winter Season. “We played it for the opening of the new Argyros Center,” Damoulakis said. “It’s an indoor black-box theater and we did it three nights in a row in a nightclub setting. Unless you’re a formed percussion quartet, and the piece is part of your repertoire, you’d never get to play it that often, so that was nice for us.”

The opportunity to play the piece a second time’s a luxury. Damoulakis explained that back in February the group spent a week together in Idaho learning it section by section. “This time around we could just play through it. Of course, it needed some rehearsal, but there was a lot less talking this time around.” 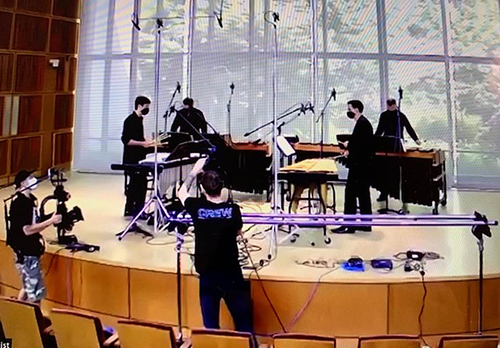 Regarding the Mixon recording sessions, Li said that he knew that the Hall had audio and video recording capabilities, and therefore assumed that somebody would simply press the record button. “When we showed up there was a crew of eight people along with three cameras, multiple microphones and lighting.  It was very serious.”

Everyone was wearing masks, and social distancing for a marimba and cello is not difficult. “Once we’re set up we’re already more than six feet apart from each other.”

The crew was also very attentive to cleanliness. “Each time we’d change headphones the crew members wiped down everything, so we all felt pretty safe.”

Damoulakis described the sessions as being more like filming a scene for a television show or movie rather than a standard recording session. “It made it challenging,” he said. “We were listening to the sessions the other night with the group on a Zoom call and I think we got what we needed. For the audience, once it starts, it’s going to be more like watching a produced film instead of a concert with different pieces being played. And somehow I think this is going to feel more complete.”

Jackson began the program with a recitation of Langston Hughes’ poem “Helen Keller” — the first of five poems by Hughes that served as interludes between each piece on the first half. END_OF_DOCUMENT_TOKEN_TO_BE_REPLACED

Pianos with pins and tape on strings, a bass drum and tam tam, crotales, Almglocken, and vibes. Microphones were hooked up all around the instruments. The feed was sent to speakers around the room. Lighting designer Nicholas Houfek hung incandescent globes over the arrangement of instruments from thin black wires stretching across the beams. END_OF_DOCUMENT_TOKEN_TO_BE_REPLACED

From the podium, Elim Chan set an ambitious tone for the evening. The rising star conductor, here in her Cleveland Orchestra debut, has a commanding style, and every twist and turn in Saturday’s performance tracked closely with her baton. END_OF_DOCUMENT_TOKEN_TO_BE_REPLACED