Things were still a bit scattered at the new place, according to the Philadelphia native — “When I find my slippers, I’ll be really happy,” she said — but the move has been good news for her beautiful set of instruments.

“They’re in their own room for the first time ever in my life — my whole instrument collection. There’s a harpsichord, a Viennese piano, an 1806 Broadwood that my husband restored, and a virginal. And there’s a square piano on loan, so eventually there will be five keyboard instruments in this one room.”

Another bonus: “We’re going to put sliding doors on the entryway so that it can be cat-free. I always have to keep the instruments covered because the cats just want to sit on them. But when the doors are there, I can keep the covers off and it will look nicer. Cats will be by invitation only.” (Pictured below: one such keyboard guest.) 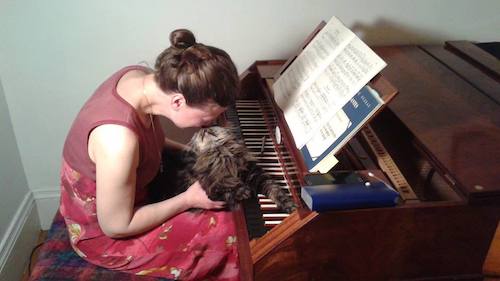 Berry brought the Viennese fortepiano along with her for the trip to Cleveland and the Les Délices concerts. “That’s the kind of instrument that Haydn, Mozart, and Beethoven played,” she said. “Later in his life, Beethoven played larger versions of the same piano, but when he started his career he played this five-octave one.”

That instrument will combine with oboe, violin, viola, and cello in an early-1800s arrangement of the Gran Partita, here titled Grand Quintetto. That’s almost as different as possible from the original’s twelve winds plus bass — though surely oboists are pleased to be the lone holdovers.

“I’ve heard the arrangement a few times, but I’ve never played it,” Berry said. “Gran Partita is just a stunning work, and if you’re a pianist or a string player, you finally get your chance with it.”

Berry’s part raises several questions. “The idea behind a lot of these arrangements was that the keyboard part is enough to be self-sufficient if you don’t have somebody at home to play with you on a certain day. So I have so much of the material that I really just feel like I’m playing a piano reduction of the Gran Partita. I’ll be interested in the rehearsals to see if I should be playing all of that stuff all the time. But in the famous slow movement, I’m just playing the accompaniment — that’s the one movement where the arranger knew the oboe really has to take the lead.” 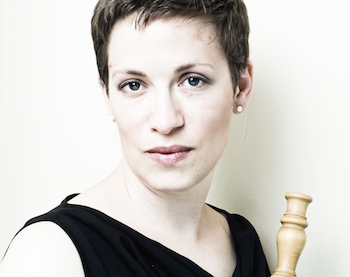 Joining Berry in the quintet will be a few players with whom she goes way back. Like Berry, oboist Debra Nagy — founder and director of Les Délices — is an Oberlin Conservatory alum, though their connection actually began on another continent.

“Debra is a little younger than me, so we weren’t in school at the same time. But Oberlin people I like. They’re so proud and familial. You meet somebody twenty years your junior who went to Oberlin, and you think, ‘Well, that’s my friend.’ The crazy thing is, I think I met Debra when I lived in Holland. She organized a concert while I was there — a bunch of Oberlin students who were living in The Hague got together and played.”

The Netherlands also brought Berry — then a student at the Royal Conservatory in The Hague — together with cellist Jaap ter Linden. “What’s really trippy to me is that I accompanied his students, so I’ve had chamber music coachings with him. It’s a little amazing to now go and play a concert with him.” Rounding out the quintet are violist Allison Monroe — whom Berry looks forward to meeting — and violinist Julie Andrijeski, “somebody whose playing I’ve always loved, though I’ve never actually worked with her.”

Continuing with the program, one of Mozart’s contemporaries was Johann Schobert, who had a big influence on the young Wolfgang. Les Délices chose his Sonate pour le clavecin (en quatuor) in E-flat, Op. 14, No. 1 for this week’s concerts. “I’m a champion of Schobert even if nobody else is,” Berry said, laughing. “He died eating poisonous mushrooms. That’s the thing most people remember about him, but he was actually pretty important. The frustrating thing about his works is that you can’t really date them. You just say 1760s because that was his heyday.”

Berry will get a break during Giuseppe Cambini’s Op. 3, No. 4 string trio, but she’ll be highlighted again during Luigi Boccherini’s 1768 Sonata for Pianoforte and Violin in B-flat, Op. 5, No. 1. “It falls into the accompanied keyboard sonata genre — it’s a showpiece for the keyboard player with the accompaniment of the violin,” Berry said. “Some people forget that quite a lot of music from the period is that way.”

The sociology surrounding the genre is fascinating. “This will sound cheesy, but it was kind of an early dating activity,” Berry said. “Keyboardists were primarily women, who were trained in things like conversation, cooking, and playing an instrument — usually a keyboard, sometimes a harp. So you had these women who played really well because they practiced all day, and these men who, among their achievements, were supposed to learn fencing and archery, and then learn to play an instrument reasonably well — that would have been the violin, flute, or cello. By design, those string parts are not always the most demanding, but being a string player himself, Boccherini gave the violin some really beautiful writing in this piece.” 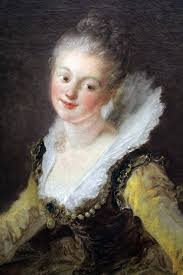 It was one particular woman, Anne Louise Brillon de Jouy, who inspired Boccherini to write the whole set of Op. 5 sonatas, helping to start his career.

“I learned about her through watching a Benjamin Franklin documentary,” Berry said. “It was at her salons that he met the wives of all these French diplomats he needed to talk to so he could get help for the Revolutionary War. She was a really talented harpsichordist and fortepianist. People knew about her — Charles Burney, who was a famous music historian, went to visit her, and Johann Christian Bach sent her a square piano from England.” And connecting the dots to Mozart’s first trip to Paris, “she would have run out to buy the music by that kid who just stopped in.”

What can people expect from the readings of Mozart’s letters? “To be honest, the letters from Paris are mostly miserable — he hated the city, and his mother died while he was there,” Berry said. “Having said that, some of the letters are hilarious. The ‘Paris’ Symphony was premiered there, and he wrote to his father saying how bad the playing was, and how he almost didn’t go to the premiere. He finally showed up, and wrote that people loved it. It went so well that he got himself an ice cream afterwards.” A happy ending to any day.

“Mozart in Paris–Part 2” is the follow-up to a January 2017 program by Les Délices, which we reviewed here.

Franz Schmidt’s Symphony No. 4 showcased the ensemble, under guest conductor Jonathan Berman, in the standard conventions of a not-so-standard piece. But at the start of the program, the musicians were equal partners to pianist Cédric Tiberghien, whose playing could be as bold as the full orchestra or as intimate as any instrumental solo. END_OF_DOCUMENT_TOKEN_TO_BE_REPLACED

END_OF_DOCUMENT_TOKEN_TO_BE_REPLACED

Jackson began the program with a recitation of Langston Hughes’ poem “Helen Keller” — the first of five poems by Hughes that served as interludes between each piece on the first half. END_OF_DOCUMENT_TOKEN_TO_BE_REPLACED

Pianos with pins and tape on strings, a bass drum and tam tam, crotales, Almglocken, and vibes. Microphones were hooked up all around the instruments. The feed was sent to speakers around the room. Lighting designer Nicholas Houfek hung incandescent globes over the arrangement of instruments from thin black wires stretching across the beams. END_OF_DOCUMENT_TOKEN_TO_BE_REPLACED

From the podium, Elim Chan set an ambitious tone for the evening. The rising star conductor, here in her Cleveland Orchestra debut, has a commanding style, and every twist and turn in Saturday’s performance tracked closely with her baton. END_OF_DOCUMENT_TOKEN_TO_BE_REPLACED