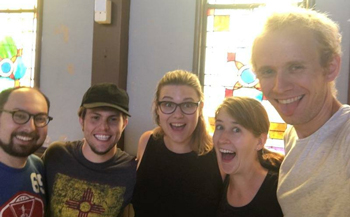 Here in Cleveland, The Syndicate for The New Arts have been spending the past week at Historic St. John’s Episcopal Church in Ohio City learning six new pieces that were written especially for the Ensemble’s upcoming seven-city Rust Belt Tour. The Cleveland concert will be held on Sunday, July 16 at 7:00 pm in Historic St. John’s.

When I arrived at the church on Saturday morning July 8, five Syndicate members were breaking down each measure of a section of Christian James’ Great Lakes Coffee Fair Trade Organic Brazil — first clapping the rhythms, then singing the music, and finally playing it on their instruments while the composer offered suggestions and made minor corrections in the score. 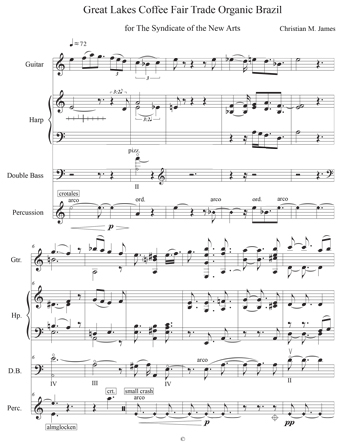 “We’ve talked about doing a summer residency for a while,” Syndicate executive director and guitarist Joshua Rosner said during a rehearsal break. “The good part about us being in Cleveland is that we have space at St. John’s so it was just a matter of getting everybody in the same place for an extended period.” Rosner noted that because of Cleveland’s central location, half of the composers were able to attend rehearsals. The Ensemble is also communicating with the other composers via Skype and by sending rehearsal sound files.

The tour repertoire will include music by Carolyn Chen, Jonah Haven, Christian James, Anthony Vine, Bethany Younge, and Carrie Zinn, all of whom answered the Syndicate’s first-ever Call for Scores. A total of 55 applications from composers around the world were received. 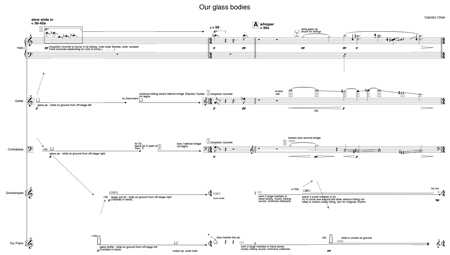 When asked about the selection process, harpist Caitlin Mehrtens shied away from calling it competitive. “A lot of our decisions were based on the application, which we tried to make a little different by asking people to tell us about themselves. Through that process we got to know the composers as well as their music. It was interesting to learn about 55 people through their applications.” 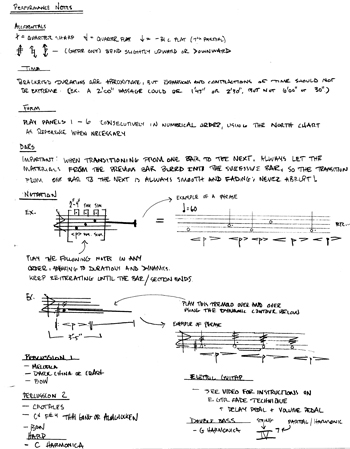 Not surprisingly, the applicants chose to express who they are in a variety of ways. “People submitted some terrible jokes,” Rosner said. “One even sent a YouTube video of a shrimp running on a treadmill. But in the end it came down to whose music do we love and who do we want to have a beer with.”

The six selected works represent a number of compositional forms “Carolyn Chen’s Our glass bodies, is full of choreography,” percussionist Ben Rempel noted. “I feel like her piece is as much about the actions we’re doing as it is about the playing. But writing the moves out in the score the way that she does helps us coordinate everything.”

Rempel said that Anthony Vine’s North is a mixture of through-composed and indeterminate music. “He calls it improvisation because we are choosing which notes to play.”  But Rosner jumped in saying that it’s more interactive than improvisatory, while Mehrtens said there are lots of fine lines between the definitions of the musical styles. 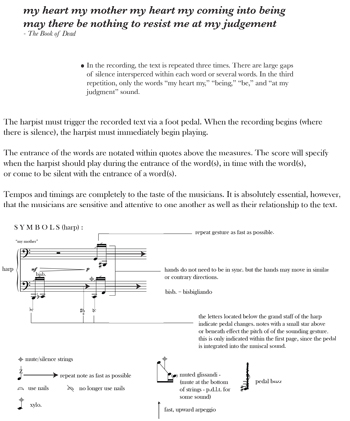 Bethany Young’s My Heart My includes a pre-recorded poem from The Book of the Dead and requires the players to react to the text, while Christian James’ Great Lakes Coffee Fair Trade Organic Brazil is through-composed and fully notated, as is Carrie Zinn’s The Sacred Ossivores March Across a Distant Prismatic Hillside.

“Jonah Haven’s Zafe is for percussion duo, and we’re playing on threaded pipes with washers,” Rempel said. “The challenge is that the rhythms are tricky and if we were only playing with sticks it would be easy. Because we’re coordinating the dragging of a washer over the pipe instead of just hitting it, we need to figure out how to get a dynamic shape.”

In addition to Rosner, Mehrtens, and Rempel, our rehearsal break conversation also included bassist Noelle Marty. Percussionist Justin Gunter will also be joining them on the tour. In addition to Cleveland, the Ensemble will perform in Columbus, Pittsburgh, Cincinnati, Chicago, Kalamazoo, and Buffalo. 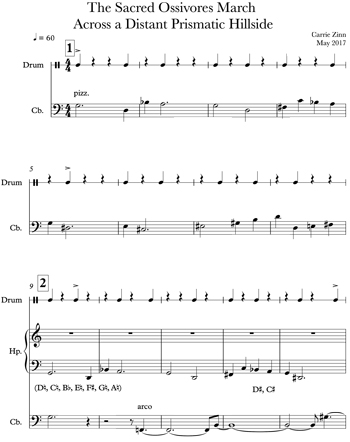 “Putting the tour together ourselves was a good learning experience,” Rosner said. “Josh has a little experience in this, but Ben, Justin and I had a lot to learn about the process of managing a tour,” Mehrtens said. I’ve never done anything like this before and there are so many details involved in the planning.”

At each concert the Ensemble will also share the stage with local musicians. “There is a huge network of people in the Rustbelt who are interested in new music,” Rosner said. “It’s nice to know how many people there are in this region of the country that are doing interesting things. It will be exciting to hit the road and explore brand-new territory.”

Wrapping up our conversation, I asked the group about their rehearsal techniques. They all agreed that these were things they learned while earning their degrees at Oberlin. “It’s combining the skills that you get from being part of the Contemporary Music Ensemble, and playing in chamber groups,” Marty said.

They also agreed that being part of Oberlin’s Performance & Improvisation (PI) program also taught them how to rehearse complicated rhythmic passages. “We owe a lot to Jamey Haddad,” Mehrtens said. “He was the one who helped us figure out how to dance sextuplets and do it together.” 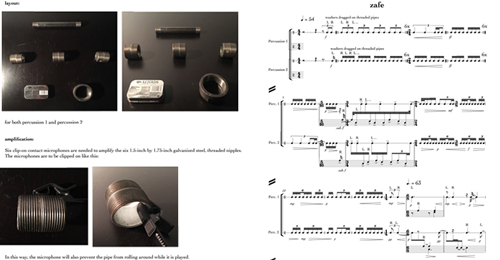 Rempel added that the good thing about the extended tour rehearsals is that they have the time to break down the music. “We can go measure by measure, clapping rhythms and singing lines. Sometimes people are opposed to doing that in rehearsal — but I’m happy we are taking the time to rehearse this way.”

Composer Christian James, who also studied at Oberlin, said that he admires the Syndicate’s commitment to his music. “I’m thankful that I’ve had the opportunity to come down here and have the luxury to work with such great players.”

The following day I contacted James and asked him to share his thoughts about the challenge of composing for the somewhat unusual instrumentation.

“When I sat down to write for the group, I admit that I was enchanted by the possibilities for blend and contrast offered by their instruments,” James said by email. “The harp, guitar, and double bass function spectacularly as a chorus of plucked strings, yet each contains a distinct character of its own. In combination with the diversity of instrument sounds producible by two percussionists, the possibilities for composition are seemingly endless,” he said. 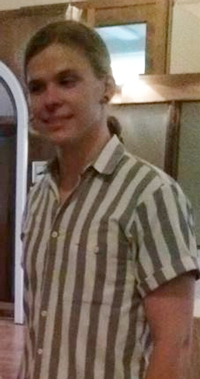 This is not the first time he has written for an unusual combination of instruments. He has composed a work for baroque oboe, harmonium, tabla, percussion, and eight singers, as well as music for three guitars, log drum, and a collection of microtonally-tuned glass milk jugs.

But when it came to writing this piece, James said he wanted it to be more than a succession of beautiful sounds. “Composing music outside of canonical performance practice demands an interpersonal approach. Thinking back, my most successful compositions result when I compose with the skills and experiences of particular musicians in mind.”

James said he considered it a great privilege to collaborate directly with these performers. “Composing for musicians whom I know and respect has yielded not only music for interesting combinations of instruments, but also expressions of nuanced states, attitudes, and experiences that are incommunicable by other means.”

Jackson began the program with a recitation of Langston Hughes’ poem “Helen Keller” — the first of five poems by Hughes that served as interludes between each piece on the first half. END_OF_DOCUMENT_TOKEN_TO_BE_REPLACED

Pianos with pins and tape on strings, a bass drum and tam tam, crotales, Almglocken, and vibes. Microphones were hooked up all around the instruments. The feed was sent to speakers around the room. Lighting designer Nicholas Houfek hung incandescent globes over the arrangement of instruments from thin black wires stretching across the beams. END_OF_DOCUMENT_TOKEN_TO_BE_REPLACED

From the podium, Elim Chan set an ambitious tone for the evening. The rising star conductor, here in her Cleveland Orchestra debut, has a commanding style, and every twist and turn in Saturday’s performance tracked closely with her baton. END_OF_DOCUMENT_TOKEN_TO_BE_REPLACED