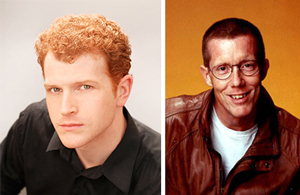 American baritone Andrew Garland presented a recital dubbed “The Quest — Don Quixote and Other Wanderers, ” as the second faculty performance of the 22nd Art Song Festival in Gamble Auditorium at Baldwin Wallace University on Thursday evening, May 22.

Partnering masterfully with Warren Jones, Musical America’s “Collaborative Pianist of the Year” for 2010, Garland took us on the quest via music by Vaughan Williams, Schubert, Gabriela Lena Frank, Ravel, Steven Mark Kohn and Leigh-Darion. Vaughan Williams’s Songs of Travel, based on poems by Robert Louis Stevenson, opened the program. The first of the nine songs, “The Vagabond”, marched along deliberately and found the team pausing slightly on the last beat of certain measures, effectively emphasizing the poetry.

Garland delivered the text with beautiful, clear diction, resonant tone and elegant phrasing, while Jones produced an exquisite array of tone colors, textures and dynamics on the piano. END_OF_DOCUMENT_TOKEN_TO_BE_REPLACED

Dedicated to the advancement of one of the most intimate and expressive forms of chamber music, the Art Song Festival was first organized by George Vassos at the Cleveland Institute of Music in 1985 and featured two distinguished artists, Elly Ameling and Gérard Souzay. Following a one-year hiatus in 1989, the festival was relaunched as an every-other-year event, and eventually moved to Baldwin Wallace, where it is now headed by BW’s voice department chair Joanne Uniatowski. END_OF_DOCUMENT_TOKEN_TO_BE_REPLACED

With this work, premiered in 1907, Sibelius offered a bold departure from the explosive emotionalism so prevalent in late-Romantic era music. This symphony was a renewed embrace of Classicism’s purity of form and melody, and one that, oddly enough, left many initial audiences of the day somewhat bewildered. END_OF_DOCUMENT_TOKEN_TO_BE_REPLACED

After eating a Po’boy from The Dawg Bowl Cajun food truck, I caught the first half of Brian Culbertson’s show in The Connor Palace Theatre. END_OF_DOCUMENT_TOKEN_TO_BE_REPLACED