When you live in a climate like Cleveland’s (or Leipzig’s, for that matter), at the first sign of moderating weather, you want to take your activities out-of-doors — rain, bugs, wind and humidity be damned. In Leipzig, Johann Sebastian Bach led summer concerts in Zimmermann’s Kaffegarten. In Hunting Valley last week, Jeannette Sorrell led two concerts in the “Baroque Music Barn” at the intersection of Shaker Boulevard and Chagrin River Road. On those occasions, the building formerly used to store apples rang out with the music of Bach and Telemann, including a thorny trio sonata, a requiem for a canary, and a virtuoso concerto. END_OF_DOCUMENT_TOKEN_TO_BE_REPLACED 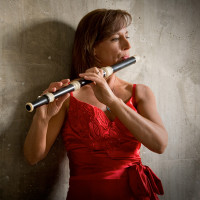 In Zimmerman’s famous Coffee-Garden in Leipzig, Johann Sebastian Bach and Georg Philipp Telemann presented an outdoor concert series of their own music in 18th century. On Thursday, June 11 and Friday, June 12 at the Baroque Music Barn in Hunting Valley, Apollo’s Fire will recreate this rustic aesthetic with a concert of Bach’s fifth Brandenburg concerto, his “Trio Sonata” from A Musical Offering, and Telemann’s tragicomic Canary Cantata.

In a recent phone conversation, baroque flutist Kathie Stewart shared her thoughts on keeping Bach’s Brandenburg fresh. “We’ve done it lots of times, and there’s no one I enjoy playing it with more than Olivier Braut (violin) and Jeannette Sorrell (harpsichord). We’ve really worked it out in a way that’s comfortable for us. It’s just such great music! It’s the most beautiful piece ever — it’s so life-affirming,” she said. “He wrote it in the best key possible for the flute — not that he was thinking of that — but he put it in D Major, which is the natural key of the baroque flute. It’s idiomatic. In fact, it’s probably the only piece he ever wrote that’s idiomatic for the flute. So it’s a joy to play and it feels good. I never get tired of it.” END_OF_DOCUMENT_TOKEN_TO_BE_REPLACED