It’s difficult to meaningfully describe a concert of contemporary music like the one presented by Chartreuse + in Oberlin’s Clonick Hall on January 7. If you’ve never experienced the aural worlds dreamed up by composers who expand the palette of sounds available on traditional instruments, it’s unlikely that you’ll be able to imagine the concert even with the aid of the finest written depiction. END_OF_DOCUMENT_TOKEN_TO_BE_REPLACED

Chartreuse: a French liqueur made by Carthusian Monks since 1737.

Chartreuse: a color halfway between yellow and green.

Chartreuse Plus/Minus: The title of the ensemble’s six-concert tour.

On Wednesday, January 7 at 8:00 pm in Clonick Hall at the Oberlin Conservatory of Music, Chartreuse will present a concert featuring the premiere of Theophilus Chandler’s Image Deposition. The evening will also include Joan Arnau Pamies’s [IVflbclVIvln/c] for flute, bass clarinet, violin, and cello, the full premiere of Kurt Isaacson’s as a family of civilian ghosts phase-shifts through the fog lights, David Bird’s pluck.divide.cut, and Katherine Young’s graveled crumbled strewn with video projection (premiere of this version). Hinrichs, Frey and Newby will be joined by flutist Hannah Hammel, clarinetist Zachary Good and bassoonist Ben Roidl-Ward. The concert is part of Oberlin’s Winter Term Chamber Music Festival. END_OF_DOCUMENT_TOKEN_TO_BE_REPLACED 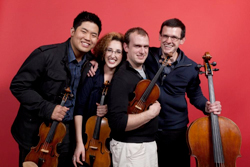 It appears that Northeast Ohio’s classical music organizations are going to be wasting no time getting back into full swing after the holidays. A quick check of our Concert Listings page reveals that almost as soon as 2015 is upon us, audiences will have plenty of concerts to choose from. However, the prize for being first out of the blocks goes to the Oberlin Conservatory.