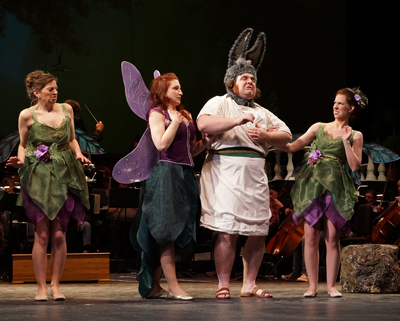 Pity any foolish composer who sets out today to write incidental music for Shakespeare’s wonderful comedy, A Midsummer Night’s Dream. Mendelssohn’s already been there and done that with such imagination and sensitivity that no one else need apply (though Benjamin Britten turned the play into a successful opera). The very large audience at E.J. Thomas Hall in Akron on Saturday evening had the rare treat of hearing every note of Mendelssohn’s score interleaved with about two-thirds of Shakespeare’s words, when Christopher Wilkins led the Akron Symphony, the Akron Symphony Shakespeare Players, the Summit Choral Society Children’s Choir and Ballet Excel Ohio in an enchanted production of the Bard’s masterpiece staged by Craig Joseph.

In Shakespeare’s words, the stage of E.J. Thomas Hall was “translated” for the occasion. The orchestra was divided into three triangular groupings on upstage risers with paths between them leading to a colonnaded playing area at the top. Downstage, a pair of balconies with ladders framed the proscenium. A scrim emblazoned with the title of the show was in place when the audience arrived; lights came up behind it to provide a gauzy ambiance for Mendelssohn’s magical overture. END_OF_DOCUMENT_TOKEN_TO_BE_REPLACED 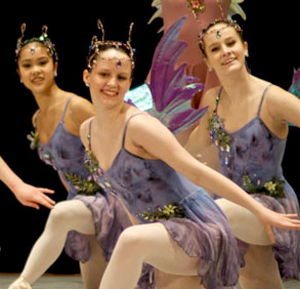 “It’s a big production with a lot of artistic components. And it’s unique in that the play is extremely famous and so is the orchestral score,” said Akron Symphony Music Director Christopher Wilkins. “Almost everybody in the world would recognize the Wedding March. They may not know where it comes from but it is universally recognized.”

In a recent telephone conversation Wilkins said he finds Mendelssohn’s music to be awe-inspiring. He also pointed out that Mendelssohn knew every word of the play (in German). While he was growing up it was common for the Mendelssohn family to stage many plays at their home. “They would invite guests to what they called Tableaux Vivants during which they would reproduce a historical theme or painting and people would come dressed as characters. Members of the family would write poetry. They had a little orchestra and Felix would write music. So when he wrote the overture at the age of 17 in the family garden, it’s pretty clear he already knew the play inside and out. END_OF_DOCUMENT_TOKEN_TO_BE_REPLACED