Now, both pieces on Saturday might be called one thing, but they really sound like another. “Symphony” is a title that would fit Sergei Rachmaninoff’s Piano Concerto No. 2, as well as John Adams’ modern masterpiece for orchestra, Harmonielehre. END_OF_DOCUMENT_TOKEN_TO_BE_REPLACED 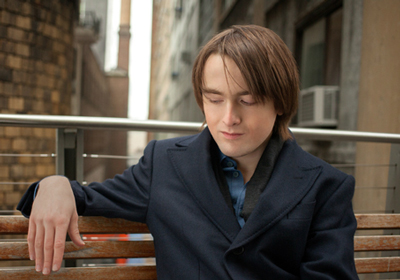 “I’m really excited to be back in Cleveland this weekend. It is an honor, and a very important step in my career to be making my Severance Hall debut with The Cleveland Orchestra,” pianist Daniil Trifonov said during a telephone conversation. “Of course I’ve been to Severance Hall on numerous occasions to hear concerts as a listener, but this is a dream that is finally coming true.”

On Thursday, March 19 at 7:30, Daniil Trifionov will perform Shostakovich’s Piano Concerto No. 1 for piano, trumpet, and orchestra, featuring TCO’s principal trumpet, Michael Sachs, under the direction of Jahja Ling. The all-Russian program will also include Rachmaninoff’s Symphony No. 2. Additional performances will take place on Saturday at 8:00pm and Sunday afternoon at 3:00.

When we spoke on Wednesday morning, Trifonov had only arrived back in Cleveland the evening before. Earlier in the month, the pianist was recording a new CD to be released later this year. Last Friday, he performed a sold-out recital for Boston’s Celebrity Series. I began our conversation by asking him to say a few words about the Shostakovich concerto. END_OF_DOCUMENT_TOKEN_TO_BE_REPLACED

END_OF_DOCUMENT_TOKEN_TO_BE_REPLACED

The strings-only work by Berg has made relatively frequent appearances on the Orchestra’s programs. In 2021, the musicians recorded it for the In Focus series, and it appeared again on last year’s European tour. Friday’s rendition maintained the group’s characteristic light and effortless playing, each section blending as much as possible to echo the work’s original form as a string quartet. At fifteen minutes total, the piece is quite short, but the dense encoded musical meanings require some extra-attentive listening. Splitting up the three movements ensured that each one could be appreciated on its own. END_OF_DOCUMENT_TOKEN_TO_BE_REPLACED