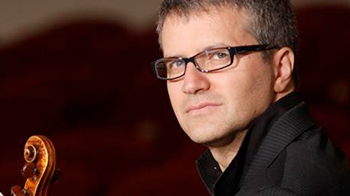 Although Luciano Berio composed his Sequenza VIII for Carlo Chiarappa, it was the violinist’s student, Francesco D’Orazio, whose performance of the piece from memory ultimately left a lasting impression on the composer. On Friday, December 9 at Transformer Station, D’Orazio gave a stunning performance of that work and other contemporary Italian compositions for solo violin. END_OF_DOCUMENT_TOKEN_TO_BE_REPLACED

By the time Italian violinist Francesco D’Orazio decided to learn Luciano Berio’s Sequenza VIII, many violinists were already playing the challenging work. He knew he would need to bring a new approach to the piece if he were to stand any chance of impressing the composer. “So I decided to play it from memory,” D’Orazio said during a telephone conversation from Italy, “and nobody was doing that back then.”

Audiences will have the opportunity to hear the celebrated violinist perform Berio’s Sequenza VIII this week, when he makes his Cleveland debut on Friday, December 9 at 7:30 at Transformer Station as part of the Cleveland Museum of Art’s Performing Arts Series. The concert will feature contemporary Italian works for solo violin.

D’Orazio’s professional relationship with Berio dates back to when the violinist was studying with Carlo Chiarappa, for whom Sequenza VIII was written. END_OF_DOCUMENT_TOKEN_TO_BE_REPLACED

The new performing arts season at the Cleveland Museum of Art begins on Wednesday, September 21 at 7:30 pm in Gartner Auditorium with a concert by Dona Onete, the septuagenarian singer-composer from the state of Pará in the Amazon, who merges indigenous rhythm and dance with African, European and Caribbean traditions in a style called carimbó chamegado*. END_OF_DOCUMENT_TOKEN_TO_BE_REPLACED

The new performing arts season at the Cleveland Museum of Art begins on Wednesday, September 21 at 7:30 pm in Gartner Auditorium with a concert by Dona Onete, the septuagenarian singer-composer from the state of Pará in the Amazon, who merges indigenous rhythm and dance with African, European and Caribbean traditions in a style called carimbó chamegado*. END_OF_DOCUMENT_TOKEN_TO_BE_REPLACED