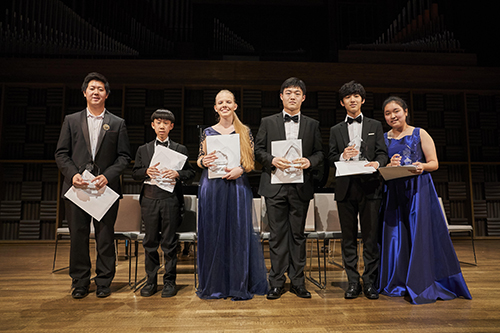 Customarily, the Cleveland International Piano Competition announces its winner late in the evening of its final round, which this year featured concertos with the Canton Symphony Orchestra on Friday evening, June 8 at the Maltz Performing Arts Center. But for the Young Artists Competition this time around, CIPC kept its competitors and followers in suspense until an awards ceremony the following evening at the Cleveland Museum of Art. Here are the results (L-R: Shuan Hern Lee, Hao Wei Lin, Eva Gevorgyan, Xiaoxuan Li, Yunchan Lim, JiWon Yang): 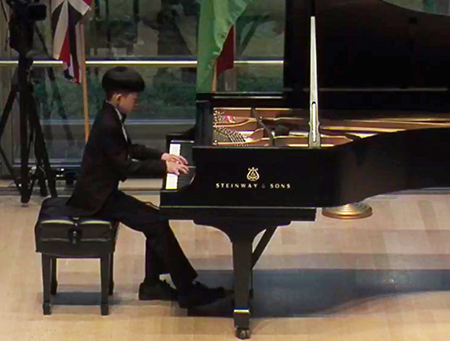 The Cleveland International Piano Competition for Young Artists brought 22 pianists (ages 12-17) from 11 countries to Cleveland beginning on May 30. By the beginning of the semifinals on Tuesday, June 5, six remained in the junior half of the draw, and seven in the senior. All were impressive performers, some of whom could stand up proudly to participants in CIPC’s 18-30 event. END_OF_DOCUMENT_TOKEN_TO_BE_REPLACED

Following the junior semifinal rounds at the Cleveland Institute of Music on Tuesday, June 5, the Cleveland International Piano Competition for Young Artists announced the three pianists who will advance to the final round with the Canton Symphony on Friday evening. They are, from left to right, Eva Gevorgyan, 13 (Russia), Yunchan Lim, 13 (South Korea), and Hao Wei Lin, 13 (Taiwan). The senior semifinal rounds will be held in Mixon Hall on Wednesday, June 6 at 1:00 and 7:00 pm, with the finalists to be named after the evening session. More information and live stream here.

END_OF_DOCUMENT_TOKEN_TO_BE_REPLACED

Rodgers & Hammerstein’s Cinderella was originally produced for television in 1957 — seven years after the animated Disney film was released — and starred Julie Andrews. According to the Rodgers & Hammerstein website, it was viewed by over 100 million people. END_OF_DOCUMENT_TOKEN_TO_BE_REPLACED

The story line has its origin in an 1855 play and an 1842 farce that Thornton Wilder mined for his 1938 play The Merchant of Yonkers. When that turned out to be a flop, in 1954 Wilder made the crucial decision to re-center the show around the character of the legendary marriage broker Dolly Gallagher Levi and renamed it The Matchmaker. END_OF_DOCUMENT_TOKEN_TO_BE_REPLACED

The Dodero Center for the Performing Arts at the Gilmore Academy in Gates Mills is one feature of an impressive campus. The auditorium is shallow, the stage is deep, and the ensemble played without a shell. Throughout the program, the sound, especially in instruments’ lower registers, tended to disappear. END_OF_DOCUMENT_TOKEN_TO_BE_REPLACED