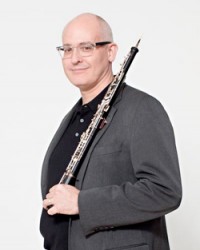 Founded in 1881 by François Lorée, the company is the oldest firm specializing in the making of oboes. Since 1935, the company has been run by the de Gourdon family. Walters said that Lorée has been part of similar events at music schools around the country. “I’ve always wanted to invite them to do one here at Oberlin. I did, and they were thrilled.  So I invited some of my friends and students who have big jobs.” END_OF_DOCUMENT_TOKEN_TO_BE_REPLACED