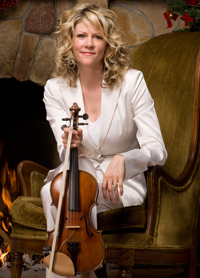 If you’ve had the privilege of hearing Natalie MacMaster perform live, you know she is one of the most versatile and exciting musicians on the folk and Celtic scenes. You also know that Christmas is a special time for her. “I’m a fiddler and at Christmas time in Cape Breton there are a ton of house parties. It’s a time to get together and play our traditional music, so there will be a lot of that on the program as well.” END_OF_DOCUMENT_TOKEN_TO_BE_REPLACED

“Never work with children or animals,” said W.C. Fields. Good advice — unless of course you have such a reliable brood as Natalie MacMaster and Donnell Leahy, who closed the first half of their sold-out concert at the Cleveland Museum of Art on Friday evening with an adorable parade of child fiddlers, beginning with 4-year-old Clare, then 6-year-old Michael, then 7-year-old Mary Frances, and eventually a cameo by 2-year-old Julia, who didn’t fiddle but gamely joined in a step dance. (1-year-old Alec stayed behind, while a sixth MacMaster-Leahy protègé was definitely involved in the show but hasn’t been born yet).

That gesture reflects the wholesome, family-values nature of MacMaster’s and Leahy’s show in Gartner Auditorium on November 15, an engaging, 2-1/2 hour festival of Cape Breton-infused music that took traditional fiddling to new heights of sophistication while preserving its down-home charm. At the beginning, MacMaster quipped that this was their last stop on a 12-city tour, “so you got us fresh,” and later narrated a long but charming account of how she and her future husband met. END_OF_DOCUMENT_TOKEN_TO_BE_REPLACED