With so many outstanding conservatories and schools of music located in Northeast Ohio, it was only a matter of time before the area became a new hotbed for contemporary classical music. On Sunday, April 12, The Syndicate for the New Arts, the most recent addition to this increasingly vibrant scene, presented its debut concert during a launch party at the Bop Stop. END_OF_DOCUMENT_TOKEN_TO_BE_REPLACED 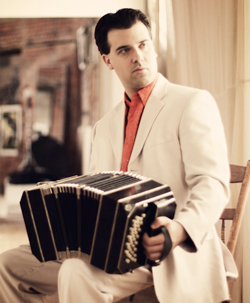 This past Thursday, October 9, Oberlin welcomed acclaimed jazz group Hot Club of Detroit for the first Performance and Improvisation (PI) guest recital of the year. Clonick Hall was packed for the occasion, all seats filled and its back wall lined with listeners. Three impressive student ensembles kicked off the evening, each of them featuring Hot Club of Detroit accordionist Julien Labro. Then, for the second half of the night, the group tore through a set full of stunning solos and duets, particularly from Labro and group founder and lead guitarist Evan Perri. END_OF_DOCUMENT_TOKEN_TO_BE_REPLACED