Meanwhile at the Gärtnerplatztheater in Munich, I had the welcome surprise of seeing an opera which incorporates experiences of racial prejudice and homophobia at the same time. Composed in 1965, Hans Werner Henze’s Der Junge Lord tells the story of Lord Edgar, a secretive English aristocrat who settles in Willhelmine, Germany, and soon finds himself under suspicion of homosexuality, child abuse, and the general social transgression of socializing with friends of African descent (two roles are specifically cast for persons of color).  END_OF_DOCUMENT_TOKEN_TO_BE_REPLACED 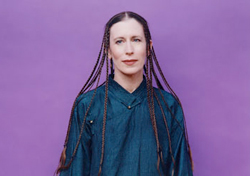 Composer, singer, director/choreographer and creator of new opera, music-theater works, films and installations, Meredith Monk is a pioneer in what is now called extended vocal technique and interdisciplinary performance. Over the last five decades, she has been hailed as “a magician of the voice” and “one of America’s coolest composers.”

On Friday, February 21 beginning at 8:00 pm the legendary Meredith Monk brings her unique brand of artistry to the Cleveland Institute of Music as part of the Mixon Hall Masters Series. The concert features Monk’s Songs from the Hill, Volcano Songs, and Music for Voice and Piano (1972-2006) including Gotham Lullaby, Travelling, Madwoman’s Vision, Choosing Companions and The Tale.

During her celebrated career, Monk has received numerous honors including the MacArthur “Genius” Award, two Guggenheim Fellowships, three Obies and two Bessie awards. She holds honorary Doctorates from Bard College, the University of the Arts, The Juilliard School, the San Francisco Art Institute and the Boston Conservatory. In 2012 she was named Musical America’s Composer of the Year and one of NPR’s 50 Great Voices and received New Music USA’s 2013 Founders Award, a 2011 Yoko Ono Lennon Courage Award for the Arts and a 2012 Doris Duke Artist Award. END_OF_DOCUMENT_TOKEN_TO_BE_REPLACED

END_OF_DOCUMENT_TOKEN_TO_BE_REPLACED

Rodgers & Hammerstein’s Cinderella was originally produced for television in 1957 — seven years after the animated Disney film was released — and starred Julie Andrews. According to the Rodgers & Hammerstein website, it was viewed by over 100 million people. END_OF_DOCUMENT_TOKEN_TO_BE_REPLACED

The story line has its origin in an 1855 play and an 1842 farce that Thornton Wilder mined for his 1938 play The Merchant of Yonkers. When that turned out to be a flop, in 1954 Wilder made the crucial decision to re-center the show around the character of the legendary marriage broker Dolly Gallagher Levi and renamed it The Matchmaker. END_OF_DOCUMENT_TOKEN_TO_BE_REPLACED

The Dodero Center for the Performing Arts at the Gilmore Academy in Gates Mills is one feature of an impressive campus. The auditorium is shallow, the stage is deep, and the ensemble played without a shell. Throughout the program, the sound, especially in instruments’ lower registers, tended to disappear. END_OF_DOCUMENT_TOKEN_TO_BE_REPLACED