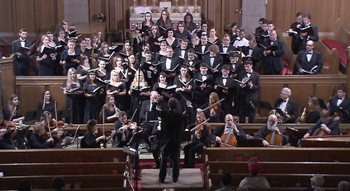 Prior to the performance Youngstown State University Professor Randall Goldberg, who had partnered in editing the new full score with his former professor, David Melamed of Indiana University, presented a pre-concert talk about the piece. END_OF_DOCUMENT_TOKEN_TO_BE_REPLACED

Although the Museum had just opened again earlier in the week, in-person concerts were not on the agenda. Instead, Classical Piano Series director Emanuela Friscioni and her husband Antonio Pompa-Baldi invited a virtual audience into their handsome, sun-dappled music room for an intimate, exquisitely-played program of four-hand piano works by Schubert and Debussy topped off with the premiere of a new work by their fellow Italian, Luca Moscardi. END_OF_DOCUMENT_TOKEN_TO_BE_REPLACED

END_OF_DOCUMENT_TOKEN_TO_BE_REPLACED

Northeast Ohio’s Les Délices has long been that rarest of beasts: a world-class organization so proud of its region (ours) and repertoire (distinct niches in pre-1800 music) that it never tries to be everything to everyone, paradoxically making a strong case for a broad, curious international following. In the December episode of its SalonEra series, the ensemble embraces its strengths and community to marvelous effect. END_OF_DOCUMENT_TOKEN_TO_BE_REPLACED