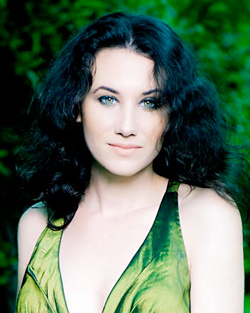 Though the Finns and the Russians have often had a complicated relationship in recent times, their musical icons — Sibelius and Tchaikovsky — made agreeable partners on Saturday evening’s Akron Symphony program in E.J. Thomas Hall when Christopher Wilkins led Sibelius’s Finlandia, The Swan of Tuonela and Symphony No. 7 and Tchaikovsky’s Piano Concerto No. 1. Two extraordinary soloists, the ASO’s English hornist Cynthia Warren and Croatian pianist Martina Filjak (left), were out in front for the occasion.

The first half of the program belonged to Jan Sibelius, beginning with a robust performance of his patriotic tone poem, Finlandia, composed for an 1899 tableau, Suomi, that advocated the overthrow of Russian rule. As in the previous ASO concert, winds and brass were elevated on risers, which gave those sections more prominence. But with a smaller orchestra this time, sections didn’t blend with each other quite as well. Percussion and brass stood out, sometimes engulfing the strings.

Sibelius set to music four legends of Lemminkainen from the Finnish national epic, the Kalevala. In the composer’s words, “Tuonela, the land of death, the hell of Finnish mythology, is surrounded by a broad river with black waters and rapid currents, on which the Swan of Tuonela floats majestically, singing.” There’s more to the legend, but The Swan of Tuonela contents itself with painting the scene of the river and the swan in a gorgeously mournful melody for English horn and orchestra. END_OF_DOCUMENT_TOKEN_TO_BE_REPLACED