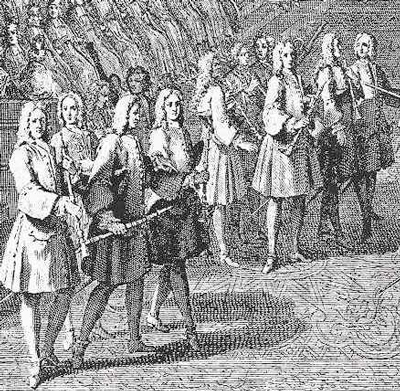 There were no horses in the parade, but the procession that brought the musicians of Les Délices onstage at the Bop Stop Saturday evening hinted at the military origins of the stirring French baroque music to come. END_OF_DOCUMENT_TOKEN_TO_BE_REPLACED

Over the past five seasons, the Cleveland-based baroque ensemble Les Délices has often treated audiences to concerts that highlight the refined music from the Royal Court of King Louis XIV. This weekend the ensemble presents two concerts that feature another side of the music from that court with “The Musketeers,” a colorful program featuring baroque oboes, bassoon, baroque guitar, theorbo, and percussion inspired by Louis XIV’s oboe band, Les Mousquetaire.

On Saturday, October 25 at 8:00 pm at The Bop Stop and on Sunday, October 26 at 4:00 pm in the Herr Chapel at Plymouth Church, Les Délices artist director Debra Nagy will be joined by her baroque oboe colleagues Stephen Bard and Kathryn Montoya, baroque bassoonist Anna Marsh, percussionist Michelle Humphreys, and guitarist and theorboist, Simon Martyn-Ellis, in performances of music by Lully, Hotteterre, Philidor and others. END_OF_DOCUMENT_TOKEN_TO_BE_REPLACED