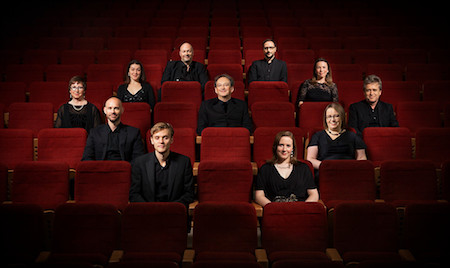 “The war to end all wars” — if only that were true. Known as simply the World War up until the late 1930s, the international disaster we now call WWI came to an armistice a century ago, after claiming over 16 million lives.

A concert this week at the Cleveland Museum of Art will commemorate those lost in that conflict. Embarking on their 71st tour to North America, director Peter Phillips and the Tallis Scholars — the British vocal ensemble whose specialty is sacred music of the Renaissance — will bring “War and Peace” to Gartner Auditorium on Friday, April 13 at 7:30 pm, as part of the Museum’s Performing Arts Series.

L’Homme Armé (“The Armed Man”), a secular song that was popular in Renaissance France, will open Friday’s concert. “It’s a real battle cry,” Peter Phillips said in a phone call from London. “We all go for it — even I sing in it. That’s a pretty noisy start.”

That tune inspired a multitude of mass settings, the most famous one by Josquin des Prez. The Tallis Scholars will pluck the Kyrie from that composer’s Missa L’Homme Armé for their next selection, establishing the framework of the program: a mosaic of a complete mass whose war-inspired movements are taken from different composers. In addition to the Josquin mass, Phillips has drawn on Francisco Guerrero’s Missa Batalla and Missa L’Homme Armé, and Giovanni Pierluigi da Palestrina’s Missa Papae Marcelli.

Phillips could have devised a mass entirely out of L’Homme Armé settings, with different composers for each movement, but he felt Friday’s program should be more balanced. “Palestrina actually wrote two L’Homme Armé Masses, but the Agnus Dei from the Papae Marcelli Mass is just so wonderful. It’s in such a category by itself, and I want to do great music in a concert program.”

I asked the director about the program’s additional selections, all of which represent peace but are also closely linked to death. That relationship might sound depressing, but Phillips pointed to the religious beliefs of Tomás Luis de Victoria, whose Requiem Mass will be represented in two movements on Friday.

“Victoria was a devoted Catholic priest,” Phillips said. “He was the kind of Christian who looked forward to death because this would be a confirmation of his life. So his Requiem, which was written for the death of his patroness, has a positive message, emphasizing the word ‘light’ and the peacefulness of dying. You don’t come away feeling suicidal like you do with some modern depictions of death. This is a gentle one, beautiful in itself, and it makes for wonderful concert music.”

Peace and death continue to intertwine in two works from the Renaissance by John Mouton and Alonso Lobo, and two from the 1990s by John Tavener and Arvo Pärt. “There’s quite a lot of funeral involved,” Phillips said.

Famously performed at the funeral of Princess Diana, Tavener’s Song for Athene was also written after the death of a family friend. “Again, John had a very positive view of death,” Phillips said, noting the alleluia at the end. He described the music on the last page as a big, heavenly paradise. “It builds up magnificently well, having been very thoughtful up to that point.”

Pärt’s The Woman with the Alabaster Box ends on the word ‘burial,’ but its message about death is the same: “It’s not the end of everything — life will go on after that. That’s what all of these composers believed, after all.”

One piece that’s genuinely sad is John Mouton’s Quis dabit oculis. “It was written for Anne of Brittany, who was a much-loved monarch. It ends in a slightly different space from these other pieces.”

We closed our conversation on the larger topic of why this program presents either very old or very new music. “It’s interesting, and I don’t know why this has happened,” Phillips said, “but it’s certainly true that more and more contemporary composers are writing music that goes well with Renaissance music. It’s partly because they’re writing for choirs or small vocal ensembles that are unaccompanied, so the music is immediately in that world.” The director added that modern composers have also tended to choose religious texts.

“And it may be that choirs like mine are much better than they were 30 years ago. The standards of choral singing have gone up, and that’s inspired composers to write for an instrument which now functions much better than it did. There’s a real desire to write something good for this medium.”

The Tallis Scholars have released several dozens of recordings on their own label, Gimell Records, and will have CDs available for purchase at the performance.

END_OF_DOCUMENT_TOKEN_TO_BE_REPLACED

Rodgers & Hammerstein’s Cinderella was originally produced for television in 1957 — seven years after the animated Disney film was released — and starred Julie Andrews. According to the Rodgers & Hammerstein website, it was viewed by over 100 million people. END_OF_DOCUMENT_TOKEN_TO_BE_REPLACED

The story line has its origin in an 1855 play and an 1842 farce that Thornton Wilder mined for his 1938 play The Merchant of Yonkers. When that turned out to be a flop, in 1954 Wilder made the crucial decision to re-center the show around the character of the legendary marriage broker Dolly Gallagher Levi and renamed it The Matchmaker. END_OF_DOCUMENT_TOKEN_TO_BE_REPLACED

The Dodero Center for the Performing Arts at the Gilmore Academy in Gates Mills is one feature of an impressive campus. The auditorium is shallow, the stage is deep, and the ensemble played without a shell. Throughout the program, the sound, especially in instruments’ lower registers, tended to disappear. END_OF_DOCUMENT_TOKEN_TO_BE_REPLACED