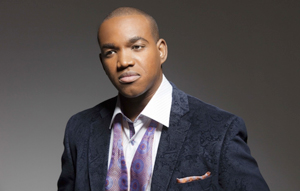 “I’m looking forward to this concert and the chance to be back in my old stomping ground,” internationally-renowned tenor and Youngstown, Ohio native Lawrence Brownlee said during a telephone conversation. “I truly am a proud son of the area.”

On Thursday, February 26 beginning at 7:30 pm in Akron’s E.J. Thomas Performing Arts Hall, Brownlee will appear as part of the Tuesday Musical Series. He will be joined by pianist Kevin Murphy in performances of music by Mozart, Joseph Marx, Liszt, Ginastera and Ben Moore. The evening will also include a set of spirituals arranged by Damien Sneed.

Brownlee, who was in Munich, Germany performing the role of Ferrando in Mozart’s Così fan tutte at the Bayerische Staatsoper at the time of our lively conversation, said that when performing a solo recital he wants the audience to feel like they are part of what is happening on the stage. “One of the main things I want to do is to break down the fourth wall. Kevin and I do get energy from the audience, and of course in a recital we’re a lot closer to the audience and they can see everything. I think it’s important to have an active and ongoing relationship with them throughout the evening. Another thing I like to do is to talk to the audience and make them feel like I’m not singing at them, but rather that we are participating in something together.”

“It’s a great way to begin a program. It’s no walk in the park, and it’s also quite taxing, but I think it makes quite an effect. It’s a virtuosic piece, and if it goes well, it’s a good precursor to the rest of the recital. Even though it’s originally for orchestra, it works well with piano. There’s nothing missing, and that’s one of the reasons why I do program the aria for recitals — you still get the full effect that Mozart intended. And I’m fortunate to be able to perform with Kevin Murphy this time.”

“These songs are quite beautiful. I think it was a pianist friend of mine from Argentina who told me that if I needed some German pieces, I should look at Austrian composer Joseph Marx — of course singers in general go for Schubert or Schumann. The five that I’ve programmed have a lot of variety in color. It’s real chamber music. Sometimes the piano takes the lead and sometimes the voice does. And, because they are not so well-known, I feel honored to be able to give many people their first experience with Joseph Marx.”

The first half will conclude with Franz Liszt’s 3 Sonetti del Petraca (Pace non trovo, Benadetto sia’l giorno and I vidi in terra).

“I fell in love with these songs when I heard a disc by Pavarotti. They’re very operatic and I think you can hear the virtuosity of Liszt in them. I had the great honor of recording them with pianist Iain Burnside, and thankfully the disc has been well received. I have performed them for a while, but they are pieces that you have to live and grow with. I love all of the recital repertoire, but this is one of my favorite sets on this recital.”

Brownlee will open the second half with Alberto Ginastera’s Canciones Populares Argentinas.

“Last year I was putting together a recital for Carnegie Hall and somebody mentioned that if I was looking for something Spanish, I should look at these. I really like all of the songs, particularly the first one, ‘Chacarera,’ and the last one, ‘Gato.’ They are so lively and have so much character. Together, all five offer so much variety. And pianists love playing them because the part is so active — they really get a chance to dig into the pieces.”

The program continues with four songs by American composer Ben Moore. The Cloak, The Boat, and the Shoes — This heart that flutters — The Lake Isle of Innisfree and I would in that sweet bosom be.

“I was introduced to Ben’s songs when I was working at the Met Opera. I happened to run into Brian Zeger, who is the head of the Met’s Young Artist Program in the hallway. He’s a friend of mine, so I told him that I needed something in English for a recital and he said, ‘guess what, my partner is a composer.’ Ben has written music for Stephanie Blythe, Deborah Voigt, Nathan Gunn, and a lot of other American singers as well as being an amateur tenor. So I went to their house, and Ben showed me these pieces. I told him that I loved them but they’re a bit too low for me. So he re-wrote them in a higher key. It’s great because people have responded to them in such a positive way. And I think Ben is going to have to publish them in the higher key because people want to sing his music because it is so beautiful.”

Brownlee has chosen to conclude his program with a set of American Spirituals, Evry time I feel de Spirit, Balm in Gilead, All night, all day, Deep River and Come by here dear Lord, arranged by the accomplished and musically versatile Damien Sneed.

“Damian and I were first introduced to each other by a mutual friend. He came to a show I was singing at the Met and afterward he told me that he really loved my work and would like to collaborate. I called him a few months later and told him that I wanted to do some African American spirituals. Of course singers of color like Marion Anderson, Martina Arroyo and Leontyne Price have for a long time been singing Negro Spirituals. And because I am a singer of color, I feel a responsibility to carry on that tradition.

‘We also wanted to show that classical music and art song is not some kind antiquated performance practice, but something that anybody can connect with and enjoy. I do understand that there was a time when singers of color did not want to be typecast as a black singer, but thankfully, now we are breaking out, and those things are becoming less of an issue. And therefore, we shouldn’t put these spirituals aside, but rather embrace them because they are part of who we are as American citizens.”

Click here to listen to Brownlee and Sneed discuss these fantastic arrangements on WNYC’s Soundcheck.

Although Lawrence Brownlee does enjoy the life of an international opera star, he says that it is his family that keeps everything in perspective. “When I’m performing opera, I have the mentality that I take my lunchbox and go to work. Of course I get a lot of pleasure out of what I do as a performer. But being a husband and father does put it all into perspective. There isn’t a day that goes by, even when I am on the road, that I don’t think about them, and my responsibility to them as a father, provider and role model.

“When I am on stage, I throw myself into what I do, but when I get home from the performances, wherever I am, I call my wife and talk to her. I get on Skype or Facetime and I talk to my son and daughter. Luckily, it’s not like it was before where you had to look at a still picture, and you heard a voice on the other end of the line. This way I can actively pass time with them. I know what they’re watching on TV, which room of the house they are in. No, you’re not there, but it does make it easier. So they are a very big part of who I am. When I perform I always want to do well, but having kids really throws the perspective back to the fact that first and foremost, the most important thing to me is being a husband and father.”

The cimbalom was the feature of the show, an instrument capable of taking on many personas. Its performer, Chester Englander, has shaped his career around the instrument, and has inspired composers to write more repertoire for it, some of which was presented on the program. END_OF_DOCUMENT_TOKEN_TO_BE_REPLACED

You wouldn’t expect that acoustic from a glance at the nave, which is wide and long, but not especially lofty. But when I guest conducted a local amateur choir and professional orchestra in Beethoven’s Mass in C there a few years back, during the first rehearsal we released the final chord of the “Gloria” and listened in astonishment for the next several seconds. The sound continued to roll down the space like the big wave that surfers dream about. END_OF_DOCUMENT_TOKEN_TO_BE_REPLACED