To launch its International Series, the Cleveland Classical Guitar Society puts on an annual showcase concert. This year’s edition on Saturday, September 16 at 7:30 pm at Plymouth Church in Shaker Heights will feature Jeremy Collins, Stephen Aron, and the Gruca White Ensemble — Robert Gruca, guitar, and Linda White, flute. The event is free, but donations are welcome.

During the concert, CCGS will present three awards: Volunteer of the Year to Simeon Brown, Student of the Year to Damian Goggans, and the Cleveland Guitar Award to Loris Chobanian, honoring an individual who has made a tremendous impact on the classical guitar in the Cleveland community.

The International Series continues on October 14 with the Cleveland debut of Turkish guitarist Celil Refik Kaya. “He’s a young player I’ve heard at the Guitar Foundation of America competition a number of times, and he’s often been my favorite player,” CCGS Executive Director Erik Mann said by telephone. “Celil’s program will include one of his own sonatas. He’s written around 100 compositions, and for whatever reason he doesn’t often play them in concert, so I’m happy he agreed to play one for us.”

The Series will also feature the Cleveland debut of Sharon Isbin on November 4. The program will include solo repertoire performed by Isbin, as well as a special guest appearance by Colin Davin.

On February 24 CCGS will present the Paris-based duo “Les Frères Méduses” (Benoît Albert and Randall Avers). “Randy is originally from Ohio and went to Oberlin. He met Ben at the Paris Conservatory,” Mann said. I’ve heard them play a number of times and I have to say that there’s nobody like them. They’re just so much fun. Their programs generally consist of high-energy, rhythmic contemporary pieces including world music — centering on the Balkans — and original compositions.”

Paul Galbraith returns to the CCGS stage on March 17. The Series will conclude on May 8 with a performance by guitarist Jason Vieaux and mezzo-soprano Sasha Cooke. The concert is a joint presentation with the Cleveland Chamber Music Society. “It’s our second collaboration with CCMS,” Mann said. “When they asked me if I was interested in this project, of course I jumped on it. They’re such a fine organization with a very long presenting history.” 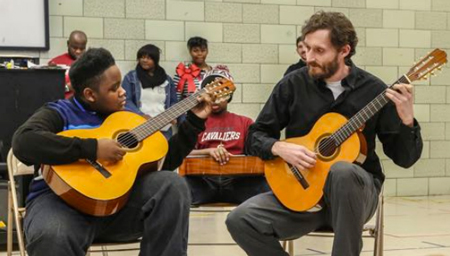 Continuing the expansion of their educational program, CCGS has recently appointed Brian Gaudino as their first director of education (above, with Damian Goggans). Gaudino’s primary job will be classroom teaching at CCGS’s partner schools. “In some cases he co-teaches with the school’s music teacher,” Mann said. “For example, at Luis Muñoz Marín Dual Language Academy, the teacher is a singer and the guitar is new to her, so Brian is working with her to develop her guitar skills and familiarizing her with our curriculum.”

Additionally, Gaudino will teach private lessons as well as leading CCGS’s two new community guitar orchestras. “For several years we’ve run the Cleveland Guitar Orchestra, which is for intermediate and advanced teens and adults, but we’ve now added a new beginning orchestra and a youth orchestra, and he is heading up both of those,” Mann noted. “Brian was an incredible find and we’re so happy to have him.”

While CCGS’s educational programs have inspired many young people, Mann is especially proud of Damian Goggans, who began playing guitar in a CCGS class in October of 2016. Less than one year later, Goggans was the recipient of a Cleveland Institute of Music Minority Artist Fellowship. “He’s also in our inaugural program at the Cleveland School for the Arts. This new partnership is great because most of our students are in middle school, and now there is a pathway for the most dedicated students to continue to study classical guitar in high school.”

Jackson began the program with a recitation of Langston Hughes’ poem “Helen Keller” — the first of five poems by Hughes that served as interludes between each piece on the first half. END_OF_DOCUMENT_TOKEN_TO_BE_REPLACED

Pianos with pins and tape on strings, a bass drum and tam tam, crotales, Almglocken, and vibes. Microphones were hooked up all around the instruments. The feed was sent to speakers around the room. Lighting designer Nicholas Houfek hung incandescent globes over the arrangement of instruments from thin black wires stretching across the beams. END_OF_DOCUMENT_TOKEN_TO_BE_REPLACED

From the podium, Elim Chan set an ambitious tone for the evening. The rising star conductor, here in her Cleveland Orchestra debut, has a commanding style, and every twist and turn in Saturday’s performance tracked closely with her baton. END_OF_DOCUMENT_TOKEN_TO_BE_REPLACED