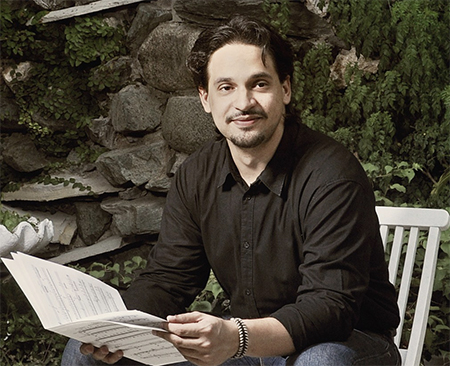 The Cleveland performance, featuring Jonathan Stuckey as Porgy, and Karen Clark Green as Bess, will be led by Dominican-born conductor Darwin Aquino. He’s now based in St. Louis, where he works with several opera companies, a symphony orchestra, and two university orchestras. I reached him by telephone in Cleveland to chat about the Gershwins’ famous opera, which he’ll be conducting for the first time.

“Although I’ve never led the entire opera, all conductors do concert versions of Porgy and Bess, because the tunes are so popular — ‘Summertime,’ ‘I got plenty o’ nuttin’,’ ‘It ain’t necessarily so.’ And there are a couple of symphonic versions of the score that include the principal themes. But the opera is a monumental production with a huge cast of 24 characters from the smallest roles — people who come in and say a few lines — up to Porgy and Bess themselves. We’ll be doing it with chorus, set, costumes, and full orchestra, and the company has made a big, big effort. We’re really proud of what we’re going to present on Saturday.”

Aquino went on to say that Porgy and Bess is special because of the way Gershwin involves the audience. “It’s not a traditional opera where you only have three or four singers to follow during the entire piece. Besides the music, which is amazing and wonderful, there are two dozen characters coming in and out. He makes you feel like you’re really inside the community of Catfish Row in Charleston.”

Having that many people in the cast creates some challenges, Aquino said. “Gershwin, genius that he was, assigned special music to each character, and there are many changes of tempo because of their interactions. He also changes time signatures, keys, and sometimes the style of the music when they speak to each other.”

Additionally, Aquino noted that Gershwin was equally influenced by jazz and modern classical music. “There are many places in the piece where the harmony is modern — dissonant with minor seconds and other sharp intervals to create certain effects that I think the audience will find quite interesting. And at one point, Gershwin creates all the sensation of being inside a storm through the orchestra. When you experience the whole opera, you’re surprised by how amazing a composer he was.”

The dialogue between characters is also clever and challenging. “In addition to sung passages and lines that are just spoken, others are spoken with pitches and rhythms,” Aquino said. “It’s challenging for the singers, but it keeps the colorful flavor of folk music.”

Soon after moving to the U.S., Darwin Aquino studied with Polish conductor Grzegorz Nowak and served as his assistant at Florida International University, a connection that led to his guest gig with The Cleveland Opera.

Although he conducts a variety of musical forms, Aquino said that opera is a particular favorite. This season alone, he has led performances of Bellini’s Norma, Rossini’s Italian in Algiers, and Menotti’s The Medium. “I enjoy it because it’s a very social and human art form. When you conduct a symphony orchestra, you say what you’re going to do, have three or four rehearsals, and go home. With opera, you’re there for at least two weeks, interacting with people ten hours a day. And if you ask for something from a singer, you have to ask in a way that encourages them to do it for you. It requires social as well as musical talent, and at the end of the production, you’ve made friends in the orchestra and cast because of the time you’ve spent with them.”

END_OF_DOCUMENT_TOKEN_TO_BE_REPLACED

Rodgers & Hammerstein’s Cinderella was originally produced for television in 1957 — seven years after the animated Disney film was released — and starred Julie Andrews. According to the Rodgers & Hammerstein website, it was viewed by over 100 million people. END_OF_DOCUMENT_TOKEN_TO_BE_REPLACED

The story line has its origin in an 1855 play and an 1842 farce that Thornton Wilder mined for his 1938 play The Merchant of Yonkers. When that turned out to be a flop, in 1954 Wilder made the crucial decision to re-center the show around the character of the legendary marriage broker Dolly Gallagher Levi and renamed it The Matchmaker. END_OF_DOCUMENT_TOKEN_TO_BE_REPLACED

The Dodero Center for the Performing Arts at the Gilmore Academy in Gates Mills is one feature of an impressive campus. The auditorium is shallow, the stage is deep, and the ensemble played without a shell. Throughout the program, the sound, especially in instruments’ lower registers, tended to disappear. END_OF_DOCUMENT_TOKEN_TO_BE_REPLACED