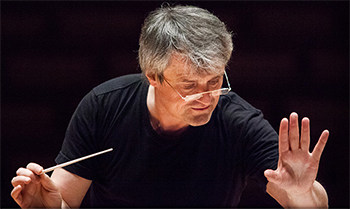 Good things come to those who wait. And when German conductor Ingo Metzmacher returns to the Severance Hall podium on Thursday, October 25 at 7:30 pm, he will lead The Cleveland Orchestra in a program he has been waiting to conduct for a very long time.

“When we agreed that Christian Tetzlaff would play the Berg Violin Concerto, I thought — here’s my chance,” Metzmacher said during a telephone conversation. “I said, how about combining that with the Webern Passacaglia, which is a wonderful piece, and Schoenberg’s Pelléas and Mélisande after intermission? And they accepted. I’m thrilled because it’s been a dream of mine to combine these pieces into one program.” Metzmacher’s “dream program” will be repeated on Saturday, October 27 at 8:00 pm. Tickets are available online.

While all three works are by composers of the Second Viennese School, a group that comprised Schoenberg along with his students and associates, Metzmacher noted that Pelléas (1903) and the Passacaglia (1908) were both written before those composers had abandoned Romanticism. “They come from before the break so to speak,” he said. “Both pieces end in d minor, so there is a link from the first to the last piece on the program.”

The conductor looks forward to reuniting with his longtime friend Christian Tetzlaff. “I don’t exactly remember when we first met, but I think it was more than 25 years ago, and I think the first piece we ever played together was this concerto.”

Metzmacher was born in Hanover, where his father was a well-known cellist. A 2000 interview with Tim Ashley of The Guardian detailed his upbringing:

“I was brought up in a musical home,” he said. “I was filled with music, from Bach to Reger.” Reger, whose work is little played in Britain, is best known as a writer of fugues of coruscating dreariness. Metzmacher found it all arid. “I saw no context with life,” he said. “I left the musical world of my father…Step by step, I discovered this whole fascinating world. I wanted to bring it to a wider audience.”

I asked Metzmacher how he began to discover that fascinating world. “I think it actually started with Schoenberg, which I never heard at home. From there on I started my adventurous voyage which has never finished. For example, now I’m doing the world premiere of Johannes Maria Staud’s Die Weiden at the Vienna State Opera. It’s very exciting, but it doesn’t mean I rejected the music of my father, I rejected the limited view on the repertoire. I’ve always believed that music has a wealth to be heard and one should open their ears to everything — to the past and to the future.”

In addition to Die Weiden, this season Metzmacher will lead new productions of Shostakovich’s Lady Macbeth of Mtsensk in Paris and the French premiere of Rihm’s Jakob Lenz at the Festival d’Aix-en-Provence. Along with his Cleveland performances he will appear with the Orchestre Philharmonique de Radio France, Deutsches Symphonie-Orchester Berlin, NDR Elbphilharmonie Orchestra, and Ensemble Modern, as well as the National Youth Orchestra of Germany.

In 2016, he was appointed Artistic Director of the Hanover-based multidisciplinary arts festival KunstFestSpiele Herrenhausen. The 2019 edition will take place in May. “It’s the kind of festival that includes music, dance, theater, performance art, installations. It combines many art forms because my feeling is that intersections between disciplines are interesting. Each year we develop a program of two and a half weeks, and so far it has been very successful. We move it forward each year — we discover new things.”

The conductor is also an author. His first book, Keine Angst vor neuen Tönen (“Don’t Be Afraid of New Sounds”), was published in 2005. There he ponders questions such as: how does what has never been heard before, as well as the unheard of, come into the world? In other words, how does new music originate? And is music absolutely free or is it bound to follow specific rules?

After we lamented the fact that the book has not been translated into English, I asked him why it was important for him to write it. “Actually, I was asked to write it. At first I said, ‘I’ve never written a book before.’ But they nudged me and so I thought that if I was going to write one, I’d better write about things I know. I tried to write about the most important composers in the 20th century — people like Mahler and on to Ives, my big favorite. There’s Schoenberg of course, and ending with Stockhausen, Nono, and Hartmann. I also wrote about basic elements of music like silence, color, and rhythm. It was successful, at least in Germany.”

I had to ask — is music absolutely free or is it bound to follow specific rules? “It is bound by the rules of nature,” he said. “There are some sounds that sound better together than others. I also think that in terms of timing there are certain rules that one has to follow, but within this framework I think that music is the freest art you can have. For example, Stravinsky always said that he first made a little square within which he would develop his piece. But then within that, he was completely free. And I think that is quite true.”

His second book, Vorhang auf! Oper entdecken und erleben (“Curtain Up! Discovering and Experiencing Opera”), was published in 2009. As we discussed composers like Verdi and Puccini, it became clear that for Metzmacher, it’s not so much about when the opera was written, but how relevant the story remains.

“Verdi can be very exciting, sometimes political, and emotionally moving. But the conflicts and challenges described in his operas are still valid today, and you’ll find those again in pieces by Janáček or Berg or Shostakovich. I always say that you can make recommendations, but in the end, people should just come once and listen to a really good modern opera and maybe they will come again. Sometimes we have prejudices that are not right. I think human beings in general should be more curious, and then decide whether they like it or not. But to not go, or not to try, is not an option for me. I’ve spent a lifetime convincing people to try new things.”