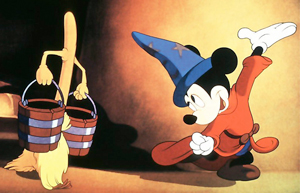 Coordinating the music and the visuals, assistant conductor Brett Mitchell was guided by flashing white dots on a small screen above his score. Easily visible from the dress circle and likely from the rest of the house as well, the electronic guidance was a little distracting but also interesting to watch: the question how close is Mitchell with the dots? became a kind of side interest.

Key moments required him to be right on time to link the music and visuals — and he was. In Beethoven’s “Pastoral” Sixth Symphony from 1940, for example, the timpani hits coincided perfectly with lightning bolt strikes thrown down from the sky by Zeus. In the evening’s encore, the finale to Saint-Saëns’s Carnival of the Animals from 2000, which followed an excellent Pines of Rome, every beat coincided with the long strides of a sassy clique of flamingos, or the flick and return of a yo-yo by the lone rebel flamingo.

Over-adherence to the prescribed tempo, however, became an issue in Stravinsky’s The Firebird Suite from 2000. Usually beautiful and expansive, the big oboe solo lost something in expression. More freedom would have been possible, as nothing on-screen at that moment demanded a certain tempo — only an elk walking through snowy woods — though taking time would of course have meant playing catch-up very soon for more strictly timed narrative.

It wouldn’t be Fantasia without Paul Dukas’s The Sorcerer’s Apprentice. The short from the 1940 film is a classic, the brilliance of its storytelling tied to the strength of its Mousy main character. Mickey is weary of work, clever and mischievous with his magical shortcut — and of course, everything goes wrong for him. It’s an instant formula for likeability. The famous bassoon soli, performed by Barrick Stees, Jonathan Sherwin and John Clouser, were excellent, as were the cymbals, matching the drama of the animation at the sorcerer’s return and biblical manipulation of Mickey’s sea. “I wish you knew how challenging that is for us,” Mitchell told the audience afterwards, praising the orchestra’s virtuosity in handling Disney’s speedy tempo.

Not all of the sequences from either Fantasia film live up to that one by a long shot. The concert’s opener, the Allegro con brio from Beethoven’s Fifth Symphony (2000) might be one of the weakest. It passes off flying triangle-shaped butterflies as characters, nothing unique about them except for their different colors (hint: root for the pink and orange ones over the black-and-red ones).

A sequence for Debussy’s Clair de lune that had been cut from the 1940 film was exciting to witness, though you could see why it wasn’t included: the video is poetic, but very little happens. Still, it proved to be one of the orchestra’s shining moments, showing off 1940 Fantasia conductor Leopold Stokowski’s inventive orchestration, with little touches of mallet instruments perking you up in your seat as if you’d heard some magic.

Tchaikovsky’s The Nutcracker Suite from 1940 was another point of excellence from the orchestra. Bass clarinetist Amitai Vardi made the most of the sighing little runs in “Dance of the Sugar Plum Fairy” with long, expressive stretches on the first notes. “Dance of the Reed Flutes” starred whom you’d expect: Joshua Smith, Marisela Sager, and Mary Kay Fink, all playing with great elegance.

Elgar’s Pomp and Circumstance (2000) and Ponchielli’s “Dance of the Hours” from La Gioconda (1940) were visual highlights along with The Sorcerer’s Apprentice. Pomp boasts about as gripping a love story between Donald and Daisy Duck as you could hope for in 6 minutes. And you get the gist of the animation to La Gioconda from Mitchell’s comments to the audience after playing it: “You’ve never lived until you’ve conducted hippos in tutus.”

Northeast Ohio’s Les Délices has long been that rarest of beasts: a world-class organization so proud of its region (ours) and repertoire (distinct niches in pre-1800 music) that it never tries to be everything to everyone, paradoxically making a strong case for a broad, curious international following. In the December episode of its SalonEra series, the ensemble embraces its strengths and community to marvelous effect. END_OF_DOCUMENT_TOKEN_TO_BE_REPLACED

END_OF_DOCUMENT_TOKEN_TO_BE_REPLACED

Another I remember fondly is Gian Carlo Menotti’s Amahl and the Night Visitors.  Commissioned by NBC, the one act, made-for-television opera, premiered on December 24, 1951, at the network’s studios in New York’s Rockefeller Center. And now, through the wonders of technology, Cleveland Opera Theater has created a magical new production of the work which is available on demand through January 6, 2021 (Three Kings Day). END_OF_DOCUMENT_TOKEN_TO_BE_REPLACED

Jessen has now followed up with her second solo CD, Winter Chapel. Recorded on January 17, 2020 in Oberlin College’s Fairchild Chapel and available on Carrier Records, the album is a continuum in Jessen’s journey to push the musical boundaries of her instrument and herself as an improviser. END_OF_DOCUMENT_TOKEN_TO_BE_REPLACED