“It’s only six or seven minutes long, and if you look at the piano part it is quite delicate,” Parameswaran said during a telephone conversation. “Only at the climax does it become loud and use the full range of the piano.”

When asked what he would point out to an audience about the piece, the conductor said, “This type of music can be difficult because it looks so harmless on the page, but it requires a lot of focus because you have to keep track of how many times things repeat. You also have to look for new textures and layers — sometimes the strings are marked without dots and other times with dots, so you need to bring out the different articulations.” 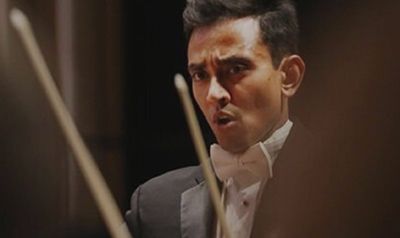 Parameswaran noted that in the middle of the movement, Glass has written a melody consisting entirely of whole notes, “which again looks so simple on the page, but maintaining a pulse is always difficult in this type of music. The piece was written to be listened to on your Walkman so I was trying to remember what it was like to walk down the street with one on — trying to imagine the feeling of just bounding along through the day with the music playing as your personal soundtrack.”

Moving to Bach, Parameswaran said that the Keyboard Concerto No. 5 complements the other pieces on the program. “I think with the Baroque, you can certainly make a connection to the counterpoint in the minimalist works — how the musical voices interplay with one another.”

Although he has not conducted a lot of Bach, Parameswaran said that he always feels “very purified” when he does. “I am a pianist, but I’ve never performed this concerto, so it was a joy to learn and conduct it with such a wonderful artist like Marc-André Hamelin.”

Written in 1977, Arvo Pärt’s Fratres (“Brothers”) was originally scored for chamber orchestra, but the version for solo violin, string orchestra, and percussion will be presented at this concert. The performance will feature associate concertmaster Jung-Min Amy Lee as soloist.

Again, Parameswaran said that while the piece looks unassuming on the page, it is difficult. “The piece is so intense and time just comes to a standstill. There’s not a lot of motion in the orchestra. They are essentially playing the same rhythm through the entire piece. The way it is put together is pure genius — it’s so simple but works brilliantly.”

John Adams’ Shaker Loops for string orchestra is a work Parameswaran said he has “loved for a long time,” adding that calling Adams a minimalist is not doing him justice. “He takes elements of the style but there’s real heart and emotion in his music, and I think you see that in this piece.”

The conductor recalled his first encounter with the composer when he was a percussionist in the San Francisco Youth Orchestra. “I was 11 or 12 years old — we were playing Lollapalooza and Adams guest conducted a rehearsal. I’m sure he doesn’t remember but I’ll never forget it because there’s a section where the person playing maracas acts as the metronome for the entire orchestra. Any professional percussionist would have had no problem, but I was only maybe 12, so I felt very exposed, and there was this back-and-forth with him making sure I could keep time.”

Parameswaran said that although it is an unusual program for the Orchestra, the players “proved that you can put anything in front of them and play it at the highest level — to be on the podium was such a privilege.”

After a discussion about the current activities of the Cleveland Orchestra Youth Orchestra — more about that in another article — we turned to the important topic of food.

I asked him what he’s cooking these days and he laughed. “I love to cook — it’s my therapy from work,” he said. “I grew up in a big family, a house of eight, so I grew up in the kitchen. My family is South Indian, so my wife and I make a lot of tamarind soups and a lot of lentils and coconut. We’re not full-vegetarians but we eat vegetarian most days out of the week — Indian food is probably the most friendly vegetarian cuisine. But we’ve also explored quite a bit. We made ramen the other night and that was fun. We’ve also baked some fun things. But when it comes to comfort food, it’s Indian food for us.”

Perhaps we can look forward to a cookbook?

To download a digital program book, text “TCO” to 216-238-0883 or click here. As always, the concert includes behind-the-scenes interviews and features about the music and music-making.

Jackson began the program with a recitation of Langston Hughes’ poem “Helen Keller” — the first of five poems by Hughes that served as interludes between each piece on the first half. END_OF_DOCUMENT_TOKEN_TO_BE_REPLACED

Pianos with pins and tape on strings, a bass drum and tam tam, crotales, Almglocken, and vibes. Microphones were hooked up all around the instruments. The feed was sent to speakers around the room. Lighting designer Nicholas Houfek hung incandescent globes over the arrangement of instruments from thin black wires stretching across the beams. END_OF_DOCUMENT_TOKEN_TO_BE_REPLACED

From the podium, Elim Chan set an ambitious tone for the evening. The rising star conductor, here in her Cleveland Orchestra debut, has a commanding style, and every twist and turn in Saturday’s performance tracked closely with her baton. END_OF_DOCUMENT_TOKEN_TO_BE_REPLACED