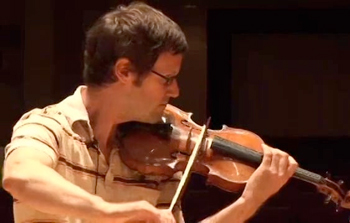 In 1936 British composer William Walton was faced with a decision: should he write a piece for violinist Joseph Szigeti and clarinetist Benny Goodman, or a concerto for Jascha Heifetz? On December 7, 1939 the famed violinist gave the premiere of Walton’s Violin Concerto with The Cleveland Orchestra conducted by Artur Rodziński.

On Thursday, March 10 at 7:30 pm at Severance Music Center, Peter Otto will perform Walton’s concerto with The Cleveland Orchestra under the direction of Franz Welser-Möst. The program also includes Adès’s The Exterminating Angel Symphony and Sibelius’s Symphony No. 5, and will be repeated on Friday at 11:00 am (no Adès) and Saturday at 8:00 pm. Tickets are available online.

During a recent telephone conversation, the first associate concertmaster said he was surprised to discover that he is only the third soloist to perform the work with the orchestra. “I knew it was Heifetz who played the premiere, then it was Nigel Kennedy and now me, which is kind of unbelievable.”

Unlike many concertos, which have long orchestral openings, this one introduces the soloist at the very beginning. “Here you just dive right in and present the main theme starting in measure two,” Otto said. “That’s something I really like — and to boot, it’s one of the most beautiful melodies ever written for the violin.”

Otto noted that the piece has an interesting history. After accepting the commission in 1936, Walton did not begin work on the concerto until early in 1938. A year later he and Heifetz met in New York to discuss the work. “Walton was such a wonderful, polite man, and he was so nervous about meeting Heifetz,” Otto said. “His only concern about  writing the concerto was: is it going to be hard enough? And until the day they met, he was shaking in his boots.” 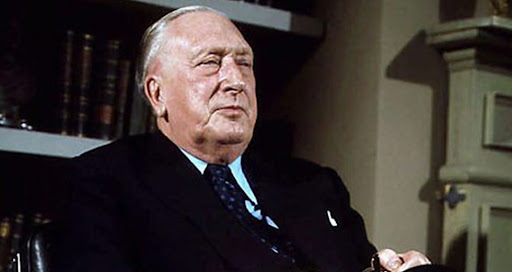 With the outbreak of WWII in September of 1939, Walton was not able to travel to Cleveland for the premiere. And the contract between the composer and soloist gave Heifetz the exclusive performance rights to the work for two years. Because of the combination of war and contract, “Walton didn’t hear his concerto until 1941 and it wasn’t Heifetz playing it.”

Otto first heard the concerto when he was in his mid-teens, and from that time he has always associated the work with Jascha Heifetz. “I have the sound of his recording in my ear,” he said. “I don’t want to say it’s been a challenge, but it’s been fun to study the score and see where it’s Heifetz, and where it’s Walton. It’s hard to say, ‘I’m going to do this differently from Heifetz,’ because obviously he is the champion of the piece. But in the end, you just have to study the score and dig deep inside yourself and you will find your own way.”

The composer also provides ample room for soloists to bring themselves into the concerto. “I think Walton was an Italian at heart,” Otto said. “He loved Italy from his late teens and he did end up moving there. I think there’s a lot of Italian in the piece, especially the popular-song feeling and bel-canto-like singing where the solo line is just floating above everybody.”

After the grand opening movement, the second-movement scherzo is marked alla napoletana. “There’s a tarantella that switches off with an ironic waltz, and the trio sounds like a 16th-century Italian Madrigal but with an almost impressionistic twist to it,” Otto said. He noted that like all British concertos, the best part is at the end.

“There’s a huge, accompanied cadenza, which to me is where Walton is the most successful — it’s compact, concise, and brings together all the elements of the piece in such a beautiful way.”

Otto said it will be important for him to be flexible during the first rehearsal with the orchestra. “It is very crucial for me — I’ve studied the score and my part, but still, the fact that something works in my mind doesn’t mean that it will when you are actually in the space. It’s mostly a ton of little things that might need to be adjusted: beef up the sound a little more here, or make it softer there. Sometimes that makes all the difference. The more intimately the performer feels something, the more it translates to the audience — and I think the point of performing is to draw the audience in.”

While Otto has a passion for, as he described it, “crazy, out-there” contemporary music — the kind that “takes you two weeks to figure out one page” — he is also in love with the Walton Concerto, and wishes that more of his music were programmed.

“He had a difficult time as a composer. Early on he was ridiculed for being a modernist, and later he was ridiculed for being too retro. I wrote down this great quote of his: I seriously advise all sensitive composers to die at the age of 37. I feel a kindred spirit. He agonized and had a hard time finding his place as a composer, but I think with the violin and viola concertos he hit a home run.”

Beginning tomorrow, March 10, proof of vaccination will no longer be mandatory at Severance Music Center, though masks are required. Read the full, updated safety policy here.

Jackson began the program with a recitation of Langston Hughes’ poem “Helen Keller” — the first of five poems by Hughes that served as interludes between each piece on the first half. END_OF_DOCUMENT_TOKEN_TO_BE_REPLACED

Pianos with pins and tape on strings, a bass drum and tam tam, crotales, Almglocken, and vibes. Microphones were hooked up all around the instruments. The feed was sent to speakers around the room. Lighting designer Nicholas Houfek hung incandescent globes over the arrangement of instruments from thin black wires stretching across the beams. END_OF_DOCUMENT_TOKEN_TO_BE_REPLACED

From the podium, Elim Chan set an ambitious tone for the evening. The rising star conductor, here in her Cleveland Orchestra debut, has a commanding style, and every twist and turn in Saturday’s performance tracked closely with her baton. END_OF_DOCUMENT_TOKEN_TO_BE_REPLACED