The music isn’t easy to play, either. Over the course of two hours, all of the musicians brought fantastic focus to the unrelenting tricky rhythms and countless layers of parts, all of which require a high level of individual responsibility. Even in the moments of calm, the accompaniment remains perpetually unsettled. Adams — who made a sprightly presence on the podium — combines minimalist, repeating motives in gradual layers, which eventually become so dense they overwhelm the senses. Lisa Wong deserves special mention for her thorough preparation of the Cleveland Orchestra Chorus, as does Jennifer Rozsa for the Children’s Chorus, which made a brief but memorable appearance in the last few minutes 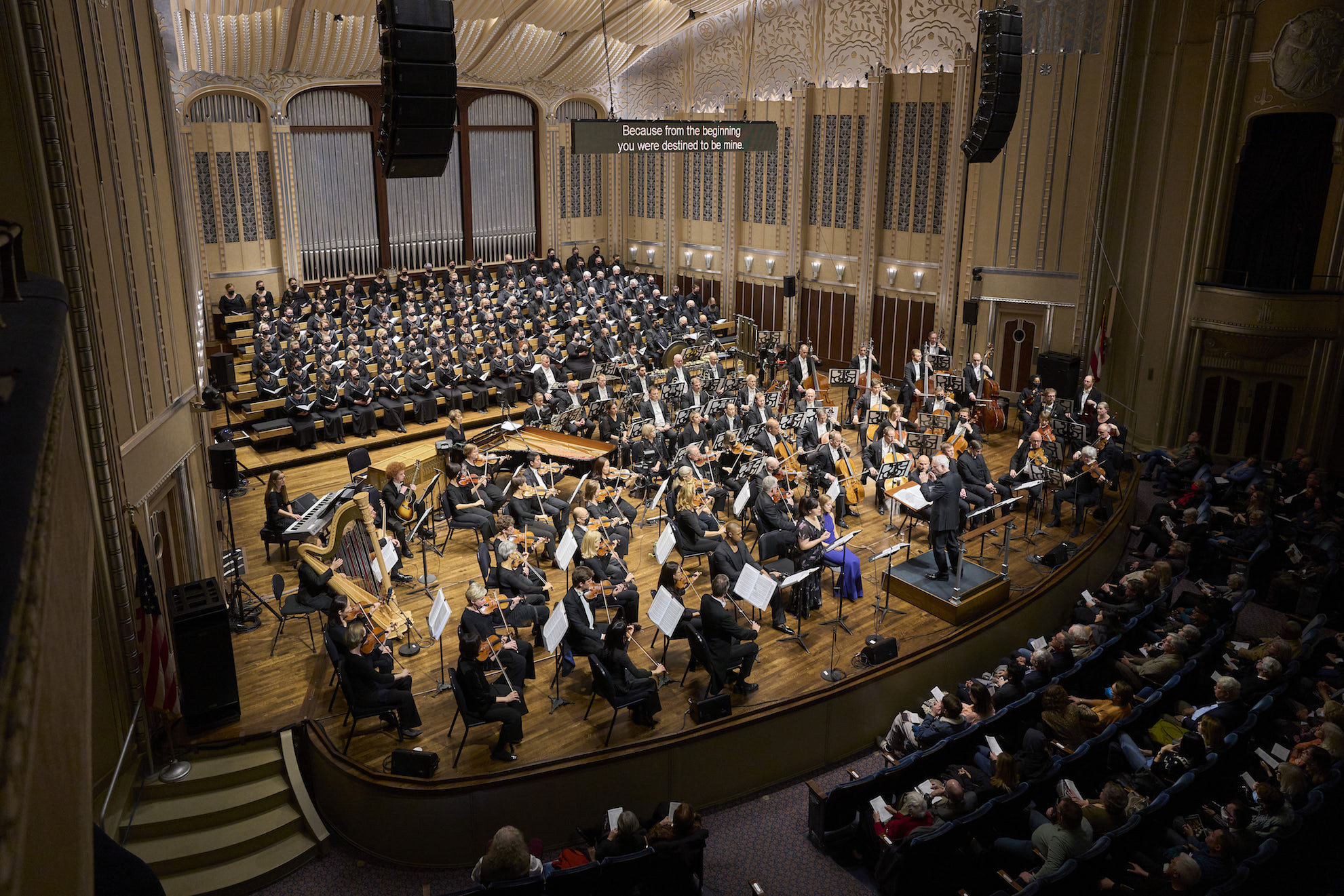 At the center of the performance were the six soloists — three of which were countertenors, easily one of the defining features of the work. The trio almost always sing from a singular perspective, their close harmonies meshing to create an supremely eerie effect. Daniel Bubeck, Brian Cummings, and Nathan Medley are all quite familiar with the work (the former two both sang in the premiere), and proved to be a fantastic combination.

Though the Biblical text lays the work’s foundation, the most poignant sections occur when the narrative zooms out, drawing parallels to modern-day society and shared experiences. “Se Habla de Gabriel,” a text by Mexican poet Rosiaro Castellanos, offers a visceral account of the anxieties and fears of pregnant women, rendered in a heart-wrenching duet between soprano Lauren Snouffer and mezzo-soprano Josefina Maldonado. Snouffer displayed both a clear, sweet tone and an impressive sense of pitch, and the young Maldonado — making her Cleveland Orchestra debut — more than held her own amid such a strong cast. Her round and resonant voice projected well in all registers, consistently controlled in sections like Castellanos’ “La anunciación.”

Bass-bariton Davóne Tines brought the requisite ferocity to his performance, first as Joseph (who thinks the virgin Mary has deceived him after finding her pregnant) and later as Herod (who orders the murder of Bethlehem’s infants). The atrocities committed by Herod are thrown into stark relief to contemporary conflict with Castellanos’ “Memorial de Tlatelolco,” a poem written as a reaction to the 1968 massacre of student protesters in Mexico City. As the featured soloist, Snouffer delivered her most powerful performance of the night.

Decades on from both the events at Tlatelolco and the work’s premiere, the commentary about violent, political acts has never been more relevant. Before last week, El Niño had never been performed at Severance, and although it’s not an easy work to put on, it’s a worthwhile one.

END_OF_DOCUMENT_TOKEN_TO_BE_REPLACED

The strings-only work by Berg has made relatively frequent appearances on the Orchestra’s programs. In 2021, the musicians recorded it for the In Focus series, and it appeared again on last year’s European tour. Friday’s rendition maintained the group’s characteristic light and effortless playing, each section blending as much as possible to echo the work’s original form as a string quartet. At fifteen minutes total, the piece is quite short, but the dense encoded musical meanings require some extra-attentive listening. Splitting up the three movements ensured that each one could be appreciated on its own. END_OF_DOCUMENT_TOKEN_TO_BE_REPLACED