Erica Brenner was one of Knab’s closest colleagues in the recording industry. They first met at Telarc, when she and Tom were “off hours” editors long before that company was sold and changed its emphasis. “We often handed projects off to each other,” she said in a recent conversation. “When he started getting more calls for freelancing, he graciously offered my name, and we had quite a nice arrangement going ever since 1992.” Brenner added that her freelancing would not have been possible without the generosity of Elaine Martone and Telarc, who let her use their editing equipment.

“It was Tom who recommended that I produce the Akron Symphony back in the ‘90s. He also recommended me to Jeannette Sorrell and Apollo’s Fire,” Brenner said. “He had a way of seeing connections between people that would create opportunities. Without all that freelance experience, as well as clients, I would have never been able to make the transition to independent producer the way I did. I’m still humbled by that, and realize I probably never told him what that meant to me. It makes me sad, but I also think, knowing Tom, that he probably knew.”

The list of projects Knab and Brenner completed together is staggering. “It’s nearly 40, 30 of which were freelance,” she said, adding that both of them also held full time jobs. “So he did all of that work after hours, and he was a devoted family man as well.”

Recordings they made for Telarc between 1993 and 2009 included the Cincinnati Symphony’s Mahler Third Symphony, several discs featuring harpist Yolanda Kondonassis, and P.D.Q. Bach’s Short-Tempered Clavier (for which Knab and Brenner had to travel to Iowa with Peter Schickele to record a calliope).

Topping off that list are fifteen albums of recordings Brenner produced and Knab recorded for Apollo’s Fire, beginning in 2002 with the ensemble’s first Mozart album and ending with Bach’s St. John Passion in 2016. “I’m in the middle of editing the St. John recording now,” Brenner said. “It’s sad to be finishing it without him, but he kept incredible notes. I know he was planning certain things during post-production, so I’ll have to channel him in order to get it right.” 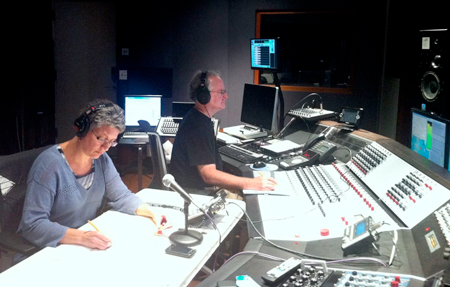 Brenner and Knab in the control room.

Tom Knab took great pains to create his own command center for every live recording project. “It was always a big job to set up, and Tom put his all into it,” Brenner said. “For CityMusic, he created a control room in the women’s washroom at Masonic Temple, with speakers and acoustic tiles so we could have as tight and non-reverberant room as possible, and an intercom so we’d have a way to talk to the artists.”

Whether the subjects were large or small, Knab brought the same level of attention to everything he recorded. “He took every project as seriously as the next, whether you were an international touring artist, or just someone who was playing recitals around town,” Brenner said. “Tom so enjoyed working with area arts organizations. He gave artists a record of their performances that they could have forever. He knew that meant a lot to them, and he honored that every time he recorded.”

In the program book for Apollo’s Fire’s opening concerts this season, artistic director Jeannette Sorrell wrote, “With an extraordinary ear, deep understanding of sound waves and acoustics, and above all, an intense dedication and drive to make every album a world-class recording, Tom is rather legendary in the world of recording engineers…A consummate professional, he infused all of his projects with a fierce integrity and dedication to honesty.”

For this appreciation, Erica Brenner shared with us a number of email messages she received which speak to Tom Knab’s engaging personality, as well as his professional accomplishments.

Telarc co-founder Jack Renner wrote, “As many have pointed out, he was one of the most kind, thoughtful persons we have ever had the pleasure of knowing…Tom was a recording engineer whose skills I greatly admired. We always knew that if Tom was on the job for a Telarc project, we would have an outstanding product.”

Elaine Martone, former Executive VP of Production for Telarc and now freelance producer, commented, “Tom was an extraordinary guy in every way. He was an incredible and caring father for his two children and a loving husband. He engineered many fine recordings. We had lots of  laughs on those sessions, while doing incredible work. He gave me a crash course in digital recording technology in 1980 prior to my job interview for Telarc.  He was patient, kind and so generous with his knowledge and his time. He made a difference in my life. He made a significant impact on the lives of many students while leading the audio technology department at the Cleveland Institute of Music; many of his students work in the music industry now.  I will never forget him.”

Pittsburgh Symphony trombonist Rebecca Cherian wrote, “What a beautiful person, talented, gentle, fun, intelligent, thoughtful, generous. It is a terrible loss. I am happy to have three beautiful recordings with the unbeatable team of Tom and Erica.  Tom will always be a part of my life.”

Beverly Simmons of Quire Cleveland first met Knab as an undergraduate student. “Tom was the brightest student in my music history class when I first arrived at Case in 1978, and he continued to enrich aspects of my life for nearly 40 years. We always considered him an essential member of Quire Cleveland, as he so expertly and sensitively recorded all of our concerts and engineered our CDs. But most importantly, his kindness, generosity, and sweet nature will continue to inspire us in music-making and in life.”

Trumpeter Ryan Anthony wrote, “So many great memories to hold on too and projects to cherish. His work will live on, but more importantly the lives he’s changed. We are all better for Tom.”

Sean Watterson of the Happy Dog wrote in a Facebook post: “Tom was the Recording Engineer on the Ensemble HD Live at The Happy Dog project, and the project could not have been the success that it was without Tom’s care and attention to detail. A Grammy winner — and nominee several times over, Tom brought enthusiasm and joy to the challenge of recording the best classical musicians in the world performing in a neighborhood corner bar…Beyond his expertise, Tom was a perpetually warm and generous soul, who was always smiling whenever I saw him. Our little project was just one example of all the people Tom touched in his life and work.”

Violist da gamba Anne Marie Morgan recalled, “I met Tom when I was making a recording in Painesville, Ohio about 20 years ago. He would do things like remove hundreds of seat cushions from pews (by himself) and prop up large tables behind my viola da gamba to get the best/right/true sound.  He sprinted across the town square to ask the entire village’s crew of lawn-mowing laborers to “please stop” working — and, of course, they stopped working! I spent hours and hours editing with him — such generosity of both time and spirit along the way. I feel so lucky to have been able to work with him again and again over the past two decades. During the times that I did spend with him, it was clear to me that his family — Rebecca, Liz and Peter — and his devotion to and love for them was paramount, spoken or not.”

Perhaps the most eloquent tributes to Tom Knab are the recordings he left behind. “Tom was always able to capture a vibrant, natural sound,” Brenner said. As a result, one of his albums won a Grammy Award, and in addition to several nominations over the years, two more albums are up for consideration this season. Asked to suggest some of her favorites, Erica Brenner sent us the following short list, adding, “I could go on…!”

Friends and colleagues who would like to add their remarks to this tribute are invited to do so in the box at the bottom of this page.

END_OF_DOCUMENT_TOKEN_TO_BE_REPLACED

The strings-only work by Berg has made relatively frequent appearances on the Orchestra’s programs. In 2021, the musicians recorded it for the In Focus series, and it appeared again on last year’s European tour. Friday’s rendition maintained the group’s characteristic light and effortless playing, each section blending as much as possible to echo the work’s original form as a string quartet. At fifteen minutes total, the piece is quite short, but the dense encoded musical meanings require some extra-attentive listening. Splitting up the three movements ensured that each one could be appreciated on its own. END_OF_DOCUMENT_TOKEN_TO_BE_REPLACED