When my colleagues and I have the opportunity to both interview and review an artist, it becomes interesting to see whether the ideas behind their program translate to the actual performance. Sometimes, from my perspective, they don’t, but the concert might still flourish in some other, unforeseen way.

And occasionally, everything comes together brilliantly, almost exactly the way the artist described. That was the case with Caroline Oltmanns’ online recital for the Tri-C Classical Piano Series on March 21, which she pre-recorded at home for the occasion.

As Oltmanns told ClevelandClassical.com’s Mike Telin a week before Sunday’s performance, if she had to name the program, she would have chosen “Tears of Joy,” the title of a Jamie Wilding piece in the center of the playlist.

That phrase can be a cliché, but in this music it’s not. Wilding beautifully and subtly swirls together that contrast of emotions, so that we often hear them simultaneously. He also mesmerizes the listener with a minimalistic sense of rhythm and a cycling rise and fall of energy, something that Oltmanns taps into masterfully.

A similar feeling came beforehand in the “Feux d’Artifices,” which capped off the opening set of five Debussy preludes. Though the sense of contrast is less intertwined than in the Wilding, here consonance and dissonance ride back and forth in surprising ways. And again, Oltmanns excelled in capturing the little bursts and recessions of energy that dot the landscape of the piece, all while maintaining a sure sense of flow. The multiple cherries on top were the spicy chromatic flurries and the light, cascading runs, showing off her impressive technique and sense of touch.

On the other side of the Wilding was Friedrich Gulda’s Übungsstück Nr. 9, making for another interesting pairing. As with Tears of Joy, a consistent, flowing rhythm is a key part of this music, but Gulda’s syncopation brings things slightly into the realm of jazz. And once again, there’s an intriguing mixture at play: an invigorating energy combined with the murkiness of the low end of the piano. 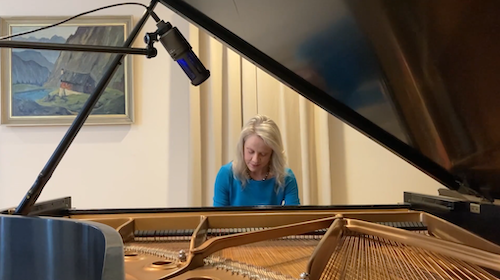 All of these short pieces created the perfect lead-up to a big sonata: Beethoven’s “Waldstein.” Its expansiveness felt like a breakthrough of ideas rather than something bloated and self-important, as large-scale pieces can feel in the wrong context. And in particular the finale exemplifies that key theme of contrasting emotions that ran through so much of the program.

Of course, contrast is common in Beethoven — splashes of energy followed by introspection, and vice versa. But by itself, the central melody of this third movement carries a vivid and complex set of feelings.

The first impression of this tune is that it radiates sunlight and joy. But what’s so special here is that this joy isn’t thrown around hyperactively — it feels measured, as though the composer knows things haven’t always been this way, and probably won’t remain this way either. As hints of a minor key make their way in and out, it becomes still more obvious that there is a context to this joy, a background which may or may not even exist explicitly within the piece.

Classic Beethoven, the sonata ends triumphantly. But rarely does that triumph feel as moving, as deserved, or as real as in this recital from Caroline Oltmanns.

Franz Schmidt’s Symphony No. 4 showcased the ensemble, under guest conductor Jonathan Berman, in the standard conventions of a not-so-standard piece. But at the start of the program, the musicians were equal partners to pianist Cédric Tiberghien, whose playing could be as bold as the full orchestra or as intimate as any instrumental solo. END_OF_DOCUMENT_TOKEN_TO_BE_REPLACED

END_OF_DOCUMENT_TOKEN_TO_BE_REPLACED

Jackson began the program with a recitation of Langston Hughes’ poem “Helen Keller” — the first of five poems by Hughes that served as interludes between each piece on the first half. END_OF_DOCUMENT_TOKEN_TO_BE_REPLACED

Pianos with pins and tape on strings, a bass drum and tam tam, crotales, Almglocken, and vibes. Microphones were hooked up all around the instruments. The feed was sent to speakers around the room. Lighting designer Nicholas Houfek hung incandescent globes over the arrangement of instruments from thin black wires stretching across the beams. END_OF_DOCUMENT_TOKEN_TO_BE_REPLACED

From the podium, Elim Chan set an ambitious tone for the evening. The rising star conductor, here in her Cleveland Orchestra debut, has a commanding style, and every twist and turn in Saturday’s performance tracked closely with her baton. END_OF_DOCUMENT_TOKEN_TO_BE_REPLACED