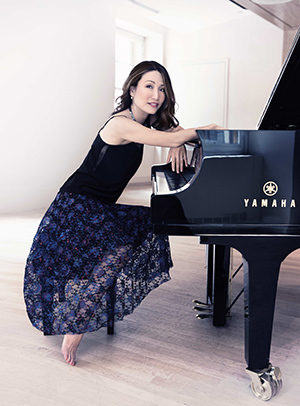 Pianist Soyeon Kate Lee, a medalist at the Cleveland International Piano Competition in 2003, will return to play a free concert on the Tri-C Classical Piano Series at the Cleveland Museum of Art on Sunday, November 24 at 3:00 pm. Her program includes works by Mozart, Debussy, Auerbach, and Chopin.

We last spoke with the pianist and her husband, Ran Dank, who both teach at the Cincinnati College-Conservatory, before their duo-piano recital in June of 2018 under the auspices of CIPC’s Competition for Young Artists. In the meantime, they’ve welcomed their second child into the family. “Was that just a year ago? That’s amazing. I can’t keep track of what’s going on,” Lee said in a late October telephone conversation.

“In a nutshell, I teach and practice, and try to juggle life. Last night at 11, I was at Kroger’s for some last-minute Halloween decorating and shopping. Our older child just turned five. He’s going to dress up as Superman. He asked me what I was going as and I said, ‘Can I just be a really tired lady?’ Lee said, laughing. “But things are good, though I’ve been on the road a lot, which leaves me with a massive number of makeup lessons at the moment. Ran and I try to take turns with the kids, and we don’t do as many duo concerts now because of the logistics.”

Lee said that she has tweaked this weekend’s program a bit, replacing a set of Spanish pieces with Ravel’s La Valse. “I’ll begin with Mozart’s E-flat Sonata (K. 282), an early work that is often overlooked but is very operatic, and striking in its dynamic markings. It begins with one of the most beautiful slow movements he wrote for the instrument.”

She’ll follow the Mozart with four of Debussy Préludes. “I’ve been trying to learn a lot of these pieces because I find his language fascinating. He’s been dubbed the first modern composer, and his colors, effects, and technique still feel new today. I didn’t want to print the titles — he listed them as an afterthought, beginning with ellipses. I’ll tell the audience not to look at the program. Just let their imagination take in the music.”

The first half ends with the Ravel. Lee decided to begin the second half with some of Lera Auerbach’s 24 Preludes. “She was a classmate of mine at Juilliard, and is first and foremost a wonderful pianist, so she writes really well for the instrument. She’s Russian, and her music is along the lines of Shostakovich and quite accessible. Some of it sounds a bit like film music, but it’s virtuosic and dreamy. I’ll probably choose five or six of these Preludes and I think they’ll showcase the colors of the piano in a really fantastic way.”

She plans to end her program with Chopin’s Second Sonata. “It’s a mainstream piece that I’d avoided learning for a long time, probably because it’s so overplayed. I had worked on it briefly when I was in school, but I never performed it, because I wanted to really have something to say about it,” she said.

“With pieces that are so famous, and recorded by all the giants, it’s sort of a daunting task to try to program them in a concert. I feel that now I’m in a place where I have found my voice completely and I’m ready to present this in public. I think the last movement remains one of the most enigmatic, strange, and unsettling. It’s unison mumbling, pretty much in the lower register of the instrument, for a little under two minutes, then it ends with this scream of a b-flat minor chord. I find it both startling and moving.”

In their joint conversation with this publication last year, Lee and Dank told us about the Music by the Glass concert series they had launched in New York. Is it still going on? “Yes! In fact we’re going to expand it,” Lee said. “Just like us, the young professionals we were able to bring to classical music in the city have gotten married and had children. While they still make an effort to attend on Wednesdays or Thursdays after work, I thought it would be great to add an educational outreach component.

“So we’re adding Music by the Cup next spring for the kids of our audience members the morning after. We’re going to serve apple juice and talk to them about the instruments, and about playing. Now that I have children, I feel more than ever how important it is to instill in them the love of music at an early age, because they will take in anything — like a sponge.

“My husband and I have been putting things on here at CCM for a preschool center that is connected to the University of Cincinnati, so we have students play for them and explain things. I can’t tell you how satisfying that is.”

Is there at least one budding pianist in the Lee-Dank household at the moment? “Our five-year-old has started violin lessons,” Lee said. “Ran and I thought it would be so much cheaper to take up the piano so we could teach him ourselves and not have to buy an instrument. He didn’t want to do what we do, but he’s loving the violin, and we’re very lucky to be in a school district where they still have music classes.”