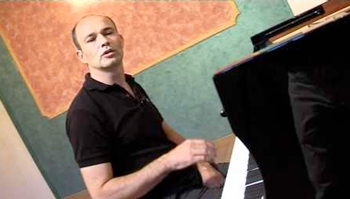 Of the 50 pieces that make up Prokofiev’s ballet Cinderella, the composer selected 19 to transcribe for the piano. Maione, who lives in Rome and teaches at the Alfredo Casella Conservatory of L’Aquila, selected a dozen of these reworkings to open his recital. In the course of the pieces, the main characters of the ballet are introduced, we meet the fairies of the four seasons and fantastical insects, and we imagine a pas de deux and a waltz with the Prince and Cinderella.

Maione was something of a stoic figure at the piano and a bit of that mien carried over into his playing on Sunday. Immaculate and tidy, his interpretations were masterful while holding humor and color at arm’s length. That proved to be a bit of a liability in the Prokofiev selections, which clocked in at 45 minutes in length.

Chopin’s 24 Préludes followed intermission. Composed between 1835 and 1839 with Johann Sebastian Bach’s Well-Tempered Clavier at his elbow, Chopin’s extraordinarily varied collection of short pieces is also organized by key, but in a different manner. Bach’s ascend the scale by half-steps, major pieces followed by minor, while Chopin’s major-key preludes follow the circle of fifths, interrupted by pieces in the relative minor. And Chopin didn’t do fugues.

Whether Chopin intended them all to be played in one sitting is an open question — he never seems to have done that himself — but the two dozen pieces are so full of contrasting material and so different in length that they’re fully capable of being performed end-to-end, even if some of the tinier preludes get a bit overshadowed.

Orazio Maione took great care to give each piece its due, and to bring out its individual character. Beautiful, expressive playing was on display throughout the course of the set, along with problematic moments. At times, his rubato seemed overdone, at others his tone became steely. A number of fast pieces went by in a blur of over-pedaling, and occasionally, voices were out of balance.

In addition to being celebrated as one of the outstanding piano virtuosi of his day, Chopin was among the most adventuresome composers in his harmonic experiments and daring modulations. In preludes like No. 17 in A-flat, Maione could have illuminated Chopin’s skill in venturing so far away from the original key and returning again by such clever means.

The Tri-C series continues on February 7, 2016 with the first local solo recital in some years by Cleveland’s own Zsolt Bognár, then on March 8 with the return of the Cleveland International Piano Competition’s 2013 gold medalist, Stanislav Khristenko. Both concerts will take place on Sundays at 2:00 pm at the Cleveland Museum of Art.