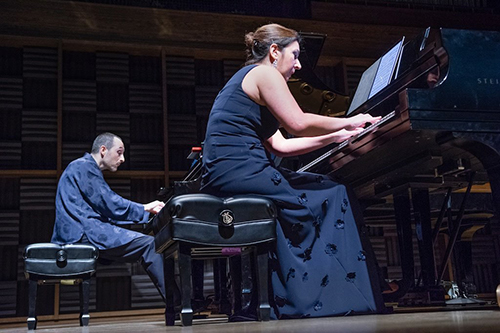 Pianists occupy a central place in the classical music world. They are ubiquitous in solo recital, out front in concertos, and they collaborate with vocalists and instrumentalists in chamber music of all kinds. But what is surprisingly rare is pianists playing together, even though two people sitting together at one or two pianos was a major form of at-home entertainment in the 19th century.

So it’s always a joy to hear two wonderful pianists team up in concert, as was the case on Sunday, March 24 when the local husband-and-wife duo of Antonio Pompa-Baldi and Emanuela Friscioni played the latest installment of the Tri-C Classical Piano Series at the Cleveland Museum of Art’s Gartner Auditorium.

Pompa-Baldi and Friscioni (who is director of the series) succeeded at making two pianos sound like one. Playing side by side, they could see each other’s hands and make easy eye contact. Not only were they perfectly in sync, their playing sounded effortless, agreeing completely on tempos and style.

20th-century Argentine composer Carlos Guastavino hewed close to traditional tonal ideas with a clear style that is both Latin and grounded in his nation’s music. A perfect example is his Tres romances argentinos, Op. 2 (1948). These three waltz-like pieces were ravishing in the hands of the performers. At times reminiscent of Liszt and Debussy, this pleasant triptych mixes pensive minor and vigorous major keys with a delightful melodic joie de vivre. 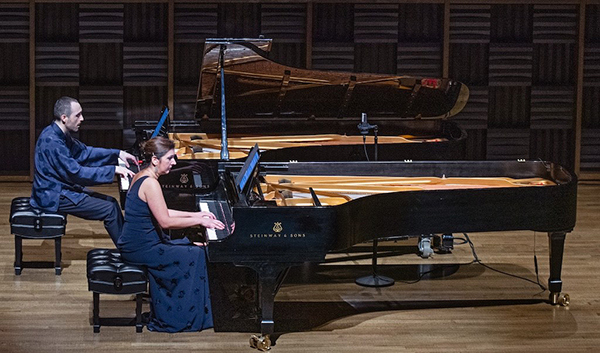 The central work of the afternoon was Francis Poulenc’s Sonata for Two Pianos. Mixing the composer’s signature bombast and melodic gift, Pompa-Baldi and Friscioni brought out both the beauty and Stravinskyan ugliness inherent in its four movements. Pounding chords opened the Prologue, while the fleet-footed second movement allegro was wonderfully insouciant. The regal plumage of the slow movement still featured the composer’s trickster quality amidst its beautiful tune. Pompa-Baldi and Friscioni made a great case for this towering, yet bubbling sonata.

After intermission, the duo turned to two late 19th-century Russian pieces, both titled Suite No. 1 for Two Pianos. Anton Arensky’s Op. 15 and Sergei Rachmaninoff’s Op. 5 were each drenched in late Romantic virtuosity and attractive melodies. Arensky brought Chopin to mind, while Rachmaninoff’s four French-titled movements were dreamy and evocative of the river, night, sadness, and Easter church bells. Pompa-Baldi and Friscioni played them with emotive assurance and joy.

Two tango encores by Astor Piazzolla — Libertango and Oblivion — in vigorous and exciting arrangements by Italian pianist-composer Roberto Piana, sent the audience off into the early spring afternoon in a dancing mood.

END_OF_DOCUMENT_TOKEN_TO_BE_REPLACED

Franz Welser-Möst led the final bows on Saturday night at Severance, like the star of any show should. The Cleveland Orchestra’s music director is in his element presiding over the ensemble’s annual opera production, which this season packs the drama. Verdi’s Otello — in a concert staging that opened May 21 and runs for two more performances (May 26 and 29) — demands big voices, instrumental forces to match, and a conductor who can give it all shape and direction. END_OF_DOCUMENT_TOKEN_TO_BE_REPLACED

The cimbalom was the feature of the show, an instrument capable of taking on many personas. Its performer, Chester Englander, has shaped his career around the instrument, and has inspired composers to write more repertoire for it, some of which was presented on the program. END_OF_DOCUMENT_TOKEN_TO_BE_REPLACED