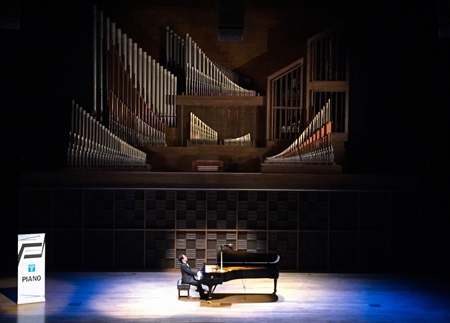 In his first local, full-length recital in a decade, Cleveland pianist Zsolt Bognár opted for musical intelligence and deep emotional content over keyboard pyrotechnics. On Sunday afternoon, February 7 in Gartner Auditorium at the Cleveland Museum of Art, Bognár gave probing performances of music by Franz Schubert, Edvard Grieg, and Franz Liszt to a good-sized audience that obviously included many of his local fans.

Pianists often choose a brief warm-up piece as a prelude to settle themselves in at the beginning of a recital. Bognár chose to charm his listeners with a soothing performance of Schubert’s lovely A-flat Impromptu, following that with the three posthumous pieces (Deutsche listing 946) discovered and published by Johannes Brahms. Restless (the Allegro assai in e-flat), cheerful (the Allegretto in E-flat), and exuberant (the Allegro in C), the triptych made for a substantial set that showed the pianist’s sensitive touch and warm and robust tone.

After intermission, Bognár offered five salon pieces by Edvard Grieg, ranging from the sentimental to the panoramic, from the Arietta No. 1 of Opus 12 to the Wedding Day at Troldhaugen of Opus 65. In between, Butterfly, Spring, and Solitary Traveler of Opus 43 were little incidental pieces that explored evanescent moods from the skittery to the fresh to the somber. Wedding Day is a more extended tone-poem that Bognár put across with a fine sense of narrative, though a bit less pedal would have made its recurring theme ring out more clearly.

As a transition to the big “Dante” sonata, Zsolt Bognár chose Franz Liszt’s transcription of Schubert’s chilling song “Der Doppelgänger” from Schwanengesang. In Heinrich Heine’s poem, a man tormented by the loss of his lover sees his ghostly double standing outside the house where she used to live. Schubert paints this paranormal episode in music with stark, parallel chords low on the keyboard and a stunning, dissonant climax. Liszt didn’t have to add much to adapt the song for solo piano, but most of the dramatic effect comes across without voice or words. Bognár gave the piece an arresting performance, and whether intentionally or because the audience was too wrapt up in the story to applaud, moved directly into Liszt’s Aprés une Lecture du Dante: Fantasia quasi Sonata.

Originally conceived in 1830 as a small work, Fragment after Dante, Liszt expanded his “After a Reading from Dante” (based on Inferno) into a full-blown fantasy in 1849. Pianists can get lost in this piece, but Bognár’s interpretation was structurally lucid, dramatic where drama was called for and relaxed and serene when Liszt invoked the musical idea of Beatrice. The pianist had plenty of power and technique to unleash, but he used those tools circumspectly and in the service of the music.

Bognár’s audience gave him an enthusiastic ovation. In turn, he offered them two extra pieces. Arvo Pärt’s Für Alina, the first piece in which the Estonian composer announced his signature style, is a calm series of isolated high pitches over a held bass note. Then Bognár played Robert Schumann’s Arabesque, characterizing it as a musical love letter to Clara when the lovers were separated and incommunicado. Together, the two “encores” provided a lovely conclusion to a beautiful Sunday afternoon recital.