Of course, the significance of that journey’s end necessitates a deeper understanding of what Tepfer did along the way. To begin with, his interpretation of Bach was sensitive and beautifully phrased, but also articulate and self-assured of direction. Energy seemed to emanate from his fingers with each new musical idea.

On the other side of the package, his fresh and impressive improvisations were fascinating to hear, and hopefully to discuss. Since each canon is built around a different interval, from unison to ninth, Tepfer tailored his creations cleverly around those same musical distances. But the challenges go further than that: as Tepfer said in an interview, he also strives for brevity in his improvisations, so that they fit in well next to the variations. On that note, almost all of Sunday’s improvisations were perfectly short and sweet; only one felt a bit long compared to its canon sibling. 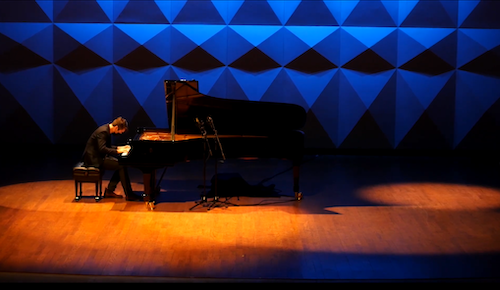 Another question: how closely should the improvisations hew to the atmosphere of the variations? Here, perhaps one or two strayed too far, but the majority struck an exquisite balance: staying in the same general realm of mood as the corresponding canon, while still staking out new territory. A great example came after the gorgeous, minor-mode Variation 15 — Tepfer’s improvisation beautifully matched Bach’s emotional depth, but still ventured into more mysterious, modern territory with the peculiarity of its parallel fifths.

Of course, that free improv near the end also deserves a special mention. Its moody character was engrossing, and its unisons between plucked piano strings and keyed notes served as compelling markers along the way. But most importantly, it served as the perfect doorway back to the aria, capping off this incredibly rewarding and deeply original musical experience.

The final third of Tepfer’s 45-minute recital was devoted to three of his own jazz compositions. The middle work, Minor Fall, provided a powerful sense of introspection, while the outer two were outgoing and uniquely percussionistic. Tepfer basically drummed on an A in the introduction to Hindi Hex, then literally drummed on the frame of the piano to begin Roadrunner. Those two pieces also share an enticing rhythmic energy, even swagger — a particularly fitting word for Roadrunner, where Tepfer never ran out of juice in his left hand, and with his right pulled off one stunning display of technique, seemingly with ease.

Now, for Bach to improvise on that.

Franz Schmidt’s Symphony No. 4 showcased the ensemble, under guest conductor Jonathan Berman, in the standard conventions of a not-so-standard piece. But at the start of the program, the musicians were equal partners to pianist Cédric Tiberghien, whose playing could be as bold as the full orchestra or as intimate as any instrumental solo. END_OF_DOCUMENT_TOKEN_TO_BE_REPLACED

END_OF_DOCUMENT_TOKEN_TO_BE_REPLACED

Jackson began the program with a recitation of Langston Hughes’ poem “Helen Keller” — the first of five poems by Hughes that served as interludes between each piece on the first half. END_OF_DOCUMENT_TOKEN_TO_BE_REPLACED

Pianos with pins and tape on strings, a bass drum and tam tam, crotales, Almglocken, and vibes. Microphones were hooked up all around the instruments. The feed was sent to speakers around the room. Lighting designer Nicholas Houfek hung incandescent globes over the arrangement of instruments from thin black wires stretching across the beams. END_OF_DOCUMENT_TOKEN_TO_BE_REPLACED

From the podium, Elim Chan set an ambitious tone for the evening. The rising star conductor, here in her Cleveland Orchestra debut, has a commanding style, and every twist and turn in Saturday’s performance tracked closely with her baton. END_OF_DOCUMENT_TOKEN_TO_BE_REPLACED