Traces of this perfect thing appear in many guises — and everything that is unimportant falls away. Tintinnabulation is like this…The three notes of a triad are like bells. And that is why I call it tintinnabulation.

Wilson last performed Passio at Trinity in 2012, and thinks this is an auspicious occasion to repeat it. In a telephone conversation, I asked the conductor to describe what listeners on Friday evening can expect to experience.

“If you’ve heard any music by Arvo Pärt, this is typical of his strong sense of mood,” he said. “It’s not lush, it’s stark, but deeply felt in the emotional sense that comes along with a lot of his music. His setting of the passion narrative is really gripping, and it holds the attention from beginning to end. The final passage is nothing short of magical. The whole work revolves around a-minor triads for an hour and ten minutes. Then after Jesus dies, there’s a bit of silence, and the choir comes in on a hushed D-major chord — a stroke of genius at that point that’s unforgettable for any listener.” 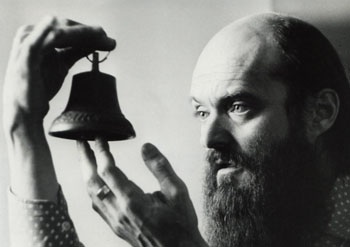 Wilson went on to describe the performing forces. “Unusually, the role of the Evangelist is sung by four soloists in various combinations — a very interesting notion. Tenor and bass soloists sing the roles of Pilate and Jesus. The instruments — organ, oboe, bassoon, violin, and cello — are used in all possible combinations. The Choir takes the part of the crowd in sporadic passages that may be ten minutes apart.”

Paul Hillier and the Hilliard Ensemble were among the first to perform Passio and make it their own. Counterenor David James said that the work represented the defining moment that fully introduced them to Pärt’s music and revealed its uniqueness.

On the Passio page of Universal Edition’s website, James underscored Todd Wilson’s description of the magic of that D-major moment late in Passio:

If you look at the score of Passio and analyse it, it is very, very spartan…there are actually only three keys used. And then at the very end…at the critical moment when Christ is on the cross and is about to die, suddenly, the four Evangelists come together on one unison A-note. And then there’s this silence, this death…he gave up his spirit. And then there’s this extraordinary moment when the choir and everybody comes in, in D-major…every time, it sends shivers down my spine. It’s like the richest Brahms you’ve ever heard, and you realise that there is life afterwards. This is the most important moment, the death, but it’s actually looking forward, it’s for a reason, it’s a positive thing, and I think that this last page is the most stunning page of music you could ever wish to hear.

Trinity’s performance of Passio on March 30 is free, but an offering will be received during the concert.

Speaking with the conductor by phone in Cleveland this past Wednesday, I began our conversation by telling him that I had a wonderful conversation with Stefan Jackiw, who was singing his praises (read the article here). Especially how sensitive the conductor’s ear is with regards to color, which Jackiw noted is quite important in the concerto’s passacaglia. END_OF_DOCUMENT_TOKEN_TO_BE_REPLACED

The music isn’t easy to play, either. Over the course of two hours, all of the musicians brought fantastic focus to the unrelenting tricky rhythms and countless layers of parts, all of which require a high level of individual responsibility. Even in the moments of calm, the accompaniment remains perpetually unsettled. Adams — who made a sprightly presence on the podium — combines minimalist, repeating motives in gradual layers, which eventually become so dense they overwhelm the senses. Lisa Wong deserves special mention for her thorough preparation of the Cleveland Orchestra Chorus, as does Jennifer Rozsa for the Children’s Chorus, which made a brief but memorable appearance in the last few minutes. END_OF_DOCUMENT_TOKEN_TO_BE_REPLACED

Warner was a fitting choice not just symbolically, but also sonically. The combination of Baroque strings, theorbo, harpsichord, and organ created a nice blend and balance, allowing the opportunity for softer instruments to stand out. In Johann Rosenmüller’s Sonata à 5 in g, Doug Balliett’s violone pizzicatos resonated beautifully, and in Johann Heinrich Schmelzer’s Sonata in d, harpsichordist Elliot Figg became an equal player in the texture with his clever improvisations. The slight exception was Joshua Stauffer on theorbo — despite the instrument’s big physical presence on stage, he received little time in the spotlight. END_OF_DOCUMENT_TOKEN_TO_BE_REPLACED