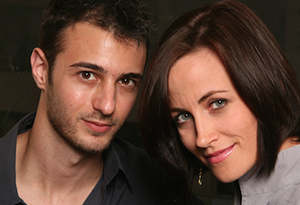 Why have so many composers been drawn to the poetry of Emily Dickinson and William Butler Yeats?  “There’s so much in their poetry that people respond to,” New York City-based pianist and composer Gregg Kallor said during a recent interview. “What they write about is universal, and that’s what makes it great. And their poetry has a quality that can be translated into music.”

“I’m looking forward to the Akron concert,” Kallor said. “I’ll be there for almost a week doing community outreach so it’ll be nice to meet people. Hopefully we’ll become fast friends and they’ll come to the concert on Thursday.”

Kallor noted that the main course of Thursday’s program will include a group of nine settings of Dickinson poems, and a group of seven settings of Yeats poems. “His poems are ripe for setting to music. His language is so lyrical and lilting.” Although most of Kallor’s settings will come from his and Zabala’s 2008 recording, Exhilaration – Dickinson and Yeats Songs, two recent settings of Yeats poems will also be featured. “The Mermaid is short and a lot of fun, and When You Are Old is a beautiful raconteur-style poem that speaks to love and regret.”

The evening will also include Kallor’s settings of poems by New Yorkers.  “There are two by Stephen Crane. Most people don’t know that he wrote poems — they’re more familiar with his book The Red Badge of Courage. These were a surprising discovery to me, but they’re little gems, very short, only four or five lines, but they pack a real punch. There’s also a beautiful poem by Sara Teasdale about unrequited love, a subject which everyone knows about.”

Kallor said that Australian poet Robert Richardson’s Warm Summer Sun is often misattributed to Mark Twain, who inscribed the final stanza of the poem on his daughter’s tombstone. “For years nobody had heard of Richardson, so everyone thought that Twain had written it, although later Twain had Richardson’s name added to the tombstone so that he would get the proper credit. It’s lovely but short, only four lines. Essentially Twain used it as a lullaby to his daughter. It sounds rather dark but I’ve hopefully set it gently enough that one needn’t think about death when listening to it.”

The Rodgers & Hammerstein classic My Favorite Things, is a song that many musicians have made their own, including John Coltrane on his classic recording. “That really opened my eyes about how to take a familiar tune and turn it into a whole other world. Of course, Julie Andrews’ performance is the classic — it’s hard to top her exuberance. For my version I added some new lyrics in addition to the old, and we’ll see if that raises any eyebrows.”

Kallor explained that as Composer-In-Residence at New York’s SubCulture, he was asked to be the music director for a holiday show that would be winter-themed rather than religious. “We were looking for music that evoked the season, and I don’t know why I associate My Favorite Things with that, but I do. We decided to arrange it, and have it talk about some of our favorite things in New York. I’m looking forward to performing it outside of New York and seeing if people will respond.”

The evening will also include a setting of a poem by Christina Rossetti and songs by Gabriel Fauré and Hugo Wolf. Kallor will also include some of his solo piano pieces. “I’ll play excerpts from a suite I wrote called A Single Noon, as well as excerpts from a newer suite I was commissioned by Subculture to write called Notes from Underground. I may throw in some non-Kallor things to break things up as well.”

Composers have been setting poetry to music since the beginning of time, but what does Kallor look for in a poem? “I want to be moved immediately. There has to be something compelling about it, something that resonates, that speaks to me, that makes me pause.”

But Kallor pointed out that when deciding to set a poem to music, it’s not enough to simply be moved by it. ”There needs to be something musical about it. Something that suggests a texture, or a particular sound world that provides the basis from which I could tweak it into something cohesive. Generally, I look for shorter texts to set. I feel more comfortable with something that is rather contained. If I find a poem that I love, that speaks to me, I kind of want to give it a cloud to float on. But I do need to remember that it is a song and people will be experiencing it as music. So it does need to be musically compelling, otherwise, in my mind, there’s no point in doing it.”

One exception to Kallor’s penchant for short poetry is his setting of Edgar Allen Poe’s Tell-Tale Heart for “mezzo-soprano-slash-rockstar” Kristin Gornstein and piano. The piece will be premiered in October in the crypt of the Church of the Intercession in Harlem. “I’m incredibly excited about this. It’s much different from the songs. We’re talking about including some simple staging and lighting to make it as creepy as possible.”

Kallor said that his residency at SubCulture has been “fantastic,” and has afforded him the opportunity to collaborate with musicians such as cellist Joshua Roman, violinist Miranda Cuckson, baritone Matthew Worth, and his Tuesday Musical partner Adriana Zabala. “It’s so helpful to be able to write for a certain voice or personality and the residency has allowed me to do a lot more of that. Instead of thinking about whether or not I’m writing the right note or rhythm, I think about how Joshua is going to phrase a line, or what Matthew is going to do with a word. That’s more real and exciting for me.”

The SubCulture residency has also given Kallor the freedom to explore ideas in a supportive environment.  “It’s cool because the director is open to all kinds of things and we chew over my ideas together. It’s great because it pushes me to do things I would have never considered without that kind of a dialogue.”

Bianca Ciubancan (16, Chicago, Ill) began the afternoon session with Jessie Montgomery’s Rhapsody No. 1 for solo violin. Playing with a warm, rich sound, Ciubancan brought a thoughtful, intimate approach to the work, highlighting each of its distinct episodes. END_OF_DOCUMENT_TOKEN_TO_BE_REPLACED

END_OF_DOCUMENT_TOKEN_TO_BE_REPLACED

Franz Schmidt’s Symphony No. 4 showcased the ensemble, under guest conductor Jonathan Berman, in the standard conventions of a not-so-standard piece. But at the start of the program, the musicians were equal partners to pianist Cédric Tiberghien, whose playing could be as bold as the full orchestra or as intimate as any instrumental solo. END_OF_DOCUMENT_TOKEN_TO_BE_REPLACED