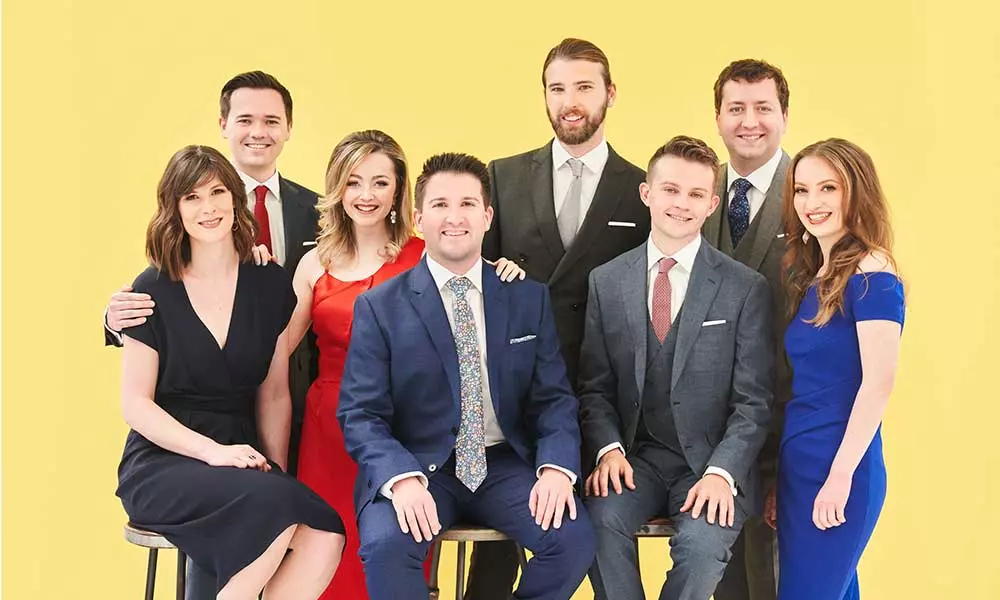 VOCES8 sings a little something for everyone. The British a cappella ensemble had a packed house at E.J. Thomas Hall on October 19, ready for the group’s polished take on any song. The program, the first performance in Tuesday Musical’s 2021–2022 Akron Concert Series, ran from Renaissance music to jazz — styles that don’t intuitively go together.

But the key to unlocking the octet’s approach came in the first piece after intermission. A swinging, singing arrangement of Bach’s Bourreé II from the Second English Suite was a bridge between musical worlds. The number, not a VOCES8 original but something of an a cappella standard, takes the composer’s quintessential Baroque keyboard writing and delivers it with a wink, in la-la-la’s and doo-be-doo’s. A lighthearted way with otherwise staid classics might make for the group’s mission statement.

It was a particularly effective strategy with music even more specialized. After the Bach, VOCES8 brought out the bawdy humor in a pair of madrigals, Thomas Weelkes’s As Vesta Was from Latmos Hill Descending and Orlando di Lasso’s Dessus le Marché D’Arras. Some comic choreography, along with precise singing, made musical sense of these intricate but never too serious pieces.

Even at its most traditional, VOCES8’s program didn’t stray earnest. The singers showed their choral bonafides with the Choral Dances from Benjamin Britten’s opera Gloriana. The suite of six movements, full of poetic language and set against the backdrop of Elizabethan England, never lost its lilting spirit. In fact, that swing was always front of mind for VOCES8, who took “Choral Dances” as the title of Tuesday’s concert.

Admittedly, some selections were less dance, more choir. The group closed out the first half with a choral favorite, the “Bogoroditse Devo” from Rachmaninoff’s All-Night Vigil, followed by another sacred work, Palestrina’s Magnificat primi toni.

And just before that, two choirs from the University of Akron had joined VOCES8 onstage for William Byrd’s Sing Joyfully and Jake Runestad’s Let Me Love Be Heard.

But dance came to the fore when the program turned to jazz. VOCES8 went with standards — Cheek to Cheek, I Won’t Dance, and more — that played up the theme. If Bach and Britten translated movement into something purely musical, these popular tunes had the singers itching to break into dance, and by the evening’s end, the group was sashaying around the stage in numbers like Moondance and Sway.

At times, the combination of choreography and arrangement bordered on show choir. VOCES8’s pop stylings worked best when the purity of their voices matched the simplicity of the music. Underneath the Stars, a 2003 song by the English folk musician Kate Rusby, was perfectly suited to the ensemble sound. Jim Clements’s arrangement kept the group in a sensitive, understated unison, with the occasional solo suggesting the singer-songwriter feeling.

VOCES8 offered one more pop/folk number for an encore, Timshel by the British band Mumford & Sons. It was another still, simple, just singing moment on the program.

Jackson began the program with a recitation of Langston Hughes’ poem “Helen Keller” — the first of five poems by Hughes that served as interludes between each piece on the first half. END_OF_DOCUMENT_TOKEN_TO_BE_REPLACED

Pianos with pins and tape on strings, a bass drum and tam tam, crotales, Almglocken, and vibes. Microphones were hooked up all around the instruments. The feed was sent to speakers around the room. Lighting designer Nicholas Houfek hung incandescent globes over the arrangement of instruments from thin black wires stretching across the beams. END_OF_DOCUMENT_TOKEN_TO_BE_REPLACED

From the podium, Elim Chan set an ambitious tone for the evening. The rising star conductor, here in her Cleveland Orchestra debut, has a commanding style, and every twist and turn in Saturday’s performance tracked closely with her baton. END_OF_DOCUMENT_TOKEN_TO_BE_REPLACED