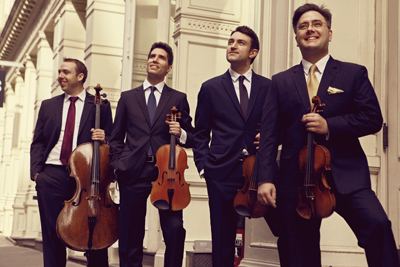 After a brief introduction by TMA executive director Jarrod Hartzler, the quartet opened the concert with Franz Schubert’s Quartettsatz (1820), the only movement the composer completed of a projected quartet in c minor. Schubert’s penchant for melodic content was obvious from the very beginning and continued throughout. The quartet produced dramatic highs and sublime lows of dynamics while speeding along at an energetic tempo. They played with precision and subtlety while keeping in constant communication both mentally and visually.

Mendelssohn’s Quartet in e minor, Op. 44, No. 2, provided even more romantic flavoring for the first half of this concert. The piece is part of the Op. 44 set of three quartets that Mendelssohn dedicated to the Crown Prince of Sweden.

The opening movement began with a haunting theme that developed into the kind of extended melodic development for which Mendelssohn is recognized. The quartet played passages of intricate sixteenths followed by lush romantic phrases, achieving a wonderful tonal blend. The Scherzo, with its contrasts between between triple and duple meter, was wonderfully precise. Though the tempo frolicked along at quite a clip, the Eschers were in control of the piece at all times, ending with a beautifully subtle cadence.

The pastoral third movement was enhanced by Adam Barnett-Hart’s eloquent violin solo, an enchanting melody played with delicate touch and subtlety. This was a highlight of the concert. The final movement, Presto agitato, seemed a bit choppy, but its rapid tempo showcased the impressive technique of the Escher String Quartet.

After the intermission, violinist Aaron Boyd gave a brief and informative introduction to Alexander Zemlinsky’s Quartet No. 2, Op. 15 (1913), commenting on the composer’s demonstrative and radical style. Zemlinsky wrote four string quartets between 1896 and 1936. While his early works were deeply influenced by Brahms, his later pieces were influenced by the style of his student Arnold Schoenberg who, coincidentally, became his brother-in-law in 1901. In their capacity as Artists of The Chamber Music Society of Lincoln Center, the Escher String Quartet will perform the complete Zemlinsky quartets on October 29 in a concert to be streamed live from the Rose Studio in New York.

Zemlinsky’s second quartet, which has no key signature, constantly pushes the limits of tonality. Its single, through-composed movement is made up of five distinct installments lasting more than forty minutes, filled with dissonance, blasts of noise, moments of terse melancholy, jolting rhythmic pulsations, and unmelodic themes.

The Escher Quartet brought their astounding technique and passion to a work that might be said to be searching for a melody and a major chord. After running the gamut of emotional stress and strain and leaving one gasping for air at times, suddenly, Zemlinsky weaves its masterful final cadence into a gentle and subtle major chord. That was a welcome, satisfying and soothing moment — as if he were paying homage to Brahms.