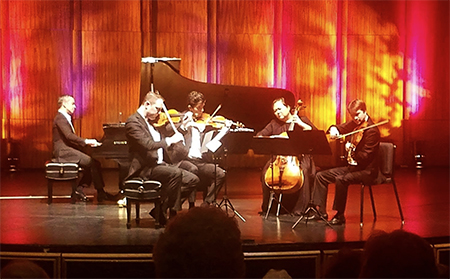 The Historically Informed Performance movement has made such an impact that the idea of performing Bach fugues and keyboard concertos with piano and string quartet seems like a throwback to the mid-20th century. But Inon Barnatan and the Calidore String Quartet used their modern instruments to fine effect in their January 22 all-Bach program on the Tuesday Musical series in Akron’s E.J. Thomas Hall.

The Calidore — violinists Jeffrey Myers and Ryan Meehan, violist Jeremy Berry, and cellist Estelle Choi — led off with seven movements from Art of Fugue. Although Meehan’s remarks from the stage brought the composer’s fugal expertise down to the level of Row, row, row your boat, the Quartet’s performances were searching, sensitive, and structurally transparent. One highlight was the Canon alla Ottava, a thrilling contrapuntal chase between Berry and Choi.

The fourteenth Contrapunctus presents a problem for performers, since Bach quit before finishing it. The Romantic legend (bolstered by a notation in the score by C.P.E. Bach) has it that Bach died at the point of weaving his own initials into what would have been the most complicated of all the fugues in the collection. Though that story has been challenged by other evidence, the Calidore chose to play the final fugue out to the point when it unravels — a tack that works its poignant best if you’ve sat through the whole piece. 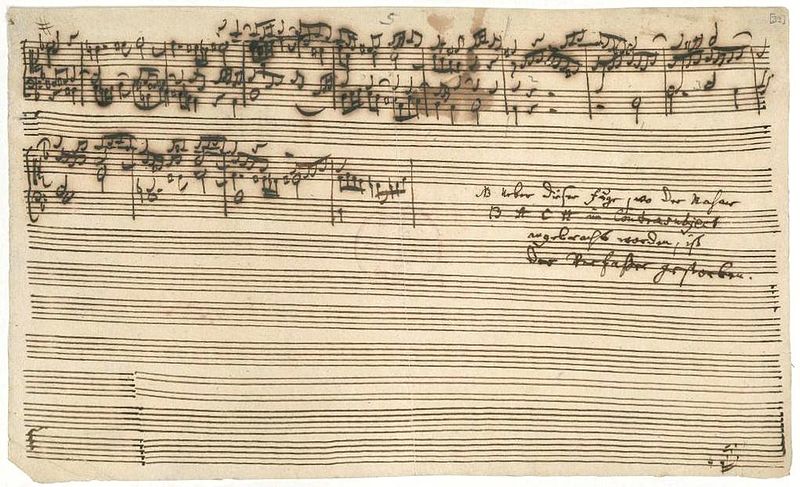 The rest of the evening was devoted to four keyboard concertos, beginning with the big d-minor work (BWV 1052) that Bach felt so highly of that he incorporated parts of the piece into two cantatas where the solo part is played on organ. Inon Barnatan and the Calidore gave it a crisp, buoyant reading that was rhythmically vital in the first movement, beautifully lyrical in the second, and surging in the third.

Three shorter concertos were among those Bach either wrote or adapted from other works later in his Leipzig career for coffee house concerts by the Collegium Musicum. If so many end-to-end keyboard concertos looks unpromising on paper, never underestimate Bach’s ability to find different textures to explore and fresh things to say.

Barnatan and the Quartet maintained a tight yet supple sense of ensemble throughout the playlist, which included the concertos in g minor, BWV 1058, A Major, BWV 1055, and f minor, BWV 1056. Barnatan handled the keyboard solo parts — mostly two-part affairs — with clarity and expressivity, and the Calidore warmly embraced those lines, using a wide swath of dynamics. Ears not familiar with this repertoire certainly pricked up in the slow movement of BWV 1056 — beautiful music Bach ironically used as a prelude to his cantata, “I stand with one foot in the grave.”

Jackson began the program with a recitation of Langston Hughes’ poem “Helen Keller” — the first of five poems by Hughes that served as interludes between each piece on the first half. END_OF_DOCUMENT_TOKEN_TO_BE_REPLACED

Pianos with pins and tape on strings, a bass drum and tam tam, crotales, Almglocken, and vibes. Microphones were hooked up all around the instruments. The feed was sent to speakers around the room. Lighting designer Nicholas Houfek hung incandescent globes over the arrangement of instruments from thin black wires stretching across the beams. END_OF_DOCUMENT_TOKEN_TO_BE_REPLACED

From the podium, Elim Chan set an ambitious tone for the evening. The rising star conductor, here in her Cleveland Orchestra debut, has a commanding style, and every twist and turn in Saturday’s performance tracked closely with her baton. END_OF_DOCUMENT_TOKEN_TO_BE_REPLACED