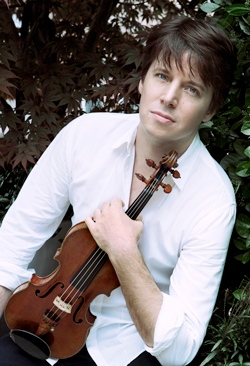 Last Friday night E. J. Thomas Hall overflowed to the rafters for an appearance by the stellar violinist Joshua Bell with the Akron Symphony. Conducted by music director Christopher Wilkins, the Symphony collaborated with the Tuesday Musical Association to sponsor the event. Bell’s exemplary performance of Max Bruch’s Violin Concerto No. 1 in g, op. 26, was the highlight of the evening. Joshua Bell is internationally famous for his technically precise performances, as well as for his wonderful violin sound, his expressive playing, and his complete artistic absorption in the music he plays.

He could be seen looking at various orchestral sections in anticipation of their entrances, and several times he joined the first violins in the tuttis. Easy-going and never overbearing, he strove to balance his sounds and timbres to the texture of the whole ensemble.

Bell scintillated in the virtuosic Prelude, beginning with a gorgeous cadenza. He delineated the necessary accentuation and was consistently accurate in pitch and articulation. The dialog between soloist and orchestra was beautifully expressive. The wide-ranging passages that followed swooped over the continuous pizzicato basses.

This slow movement that directly followed built to a passionate climax and ultimately eased off to a quieter close. Soloist and orchestra equally shared its three beautiful themes.

The Finale began with a rather chromatic passage in the orchestra immediately followed by Bell’s powerful entrance. He played its complex multiple stops and rapid challenging-but tuneful passages with élan and grace, never overplaying the vibrant first theme. After the orchestra introduced the broader second theme, Bell responded effortlessly with his gorgeous answering material. The short middle section developed the lilting first theme and quickly moved to the recapitulation, itself succeeded by a coda that again highlighted the first theme. This movement has the potential for great beauty, and Bell, Wilkins, and the Orchestra combined to produce a magnificently musical performance.

Bell performed a lively encore, Henri Vieuxtemps’s Souvenir d’Amérique: Variations on “Yankee Doodle,” that combined intricate virtuoso violin technique with short variations on the well-known tune. One variation was made up exclusively of harmonics. The audience was delighted.

Sergei Prokofiev’s forty-five-minute Symphony No. 5, Op. 100, occupied the central portion of the concert. It is a monumental work composed for a large orchestra with expanded brass, percussion, piano, and harp. Written during the summer of 1944 during the struggle against Nazi Germany, Prokofiev felt it was “a symphony about the spirit of man.” The Russian army’s resounding victory over the Germans on the River Vistula was announced just before the premiere. Wilkins and the Orchestra shaped a fine performance of this complex, angular work. The predominance of tuba and timpani gave the piece an especially strident sensibility.

The first movement, Andante, opened with widely spaced textures. The pairing of flute and bassoon moved on to the full strings. The mood was intense, but lyrical — the latter particularly in the second theme, presented first by flute and oboe. The third theme featured dotted rhythms and supported a climax; the fourth, more sudden and rapid movement. An extensive development led to a recapitulation powerfully announced by the full brass.

The second movement, Allegro marcato, was like a scherzo, though the characteristic triple meter did not appear until the third theme. The recurring solo clarinet, the violins on the perpetual motion accompaniment, a colorful duet between English horn and bassoon in the middle section, lovely use of percussion and piano highlights, and some “wrong-note” surprises, all gave the movement a piquant flavor.

The steady movement of low instruments supporting a mournful clarinet melody created a dark quality in the outer sections of the Adagio. The tuba introduced a more continuous theme in the middle section. Later, high first violins commented on the same material.

The Finale: Allegro energico began with two cyclical references to the main theme of the first movement. Later, an excellent clarinet solo heralded each recurrence of the rondo theme. Other fine solo playing by flute, oboe, and French horn enriched the lovely performance, as did attractive percussion shadings.

The concert began with Mikhail Glinka’s short Overture to Ruslan and Ludmilla. The orchestra played the lively, multi-themed piece with flair.

END_OF_DOCUMENT_TOKEN_TO_BE_REPLACED

Rodgers & Hammerstein’s Cinderella was originally produced for television in 1957 — seven years after the animated Disney film was released — and starred Julie Andrews. According to the Rodgers & Hammerstein website, it was viewed by over 100 million people. END_OF_DOCUMENT_TOKEN_TO_BE_REPLACED

The story line has its origin in an 1855 play and an 1842 farce that Thornton Wilder mined for his 1938 play The Merchant of Yonkers. When that turned out to be a flop, in 1954 Wilder made the crucial decision to re-center the show around the character of the legendary marriage broker Dolly Gallagher Levi and renamed it The Matchmaker. END_OF_DOCUMENT_TOKEN_TO_BE_REPLACED

The Dodero Center for the Performing Arts at the Gilmore Academy in Gates Mills is one feature of an impressive campus. The auditorium is shallow, the stage is deep, and the ensemble played without a shell. Throughout the program, the sound, especially in instruments’ lower registers, tended to disappear. END_OF_DOCUMENT_TOKEN_TO_BE_REPLACED