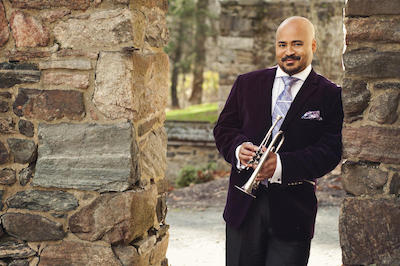 Do you prefer your holiday programs to span several genres — and to have that special glint in the sound that only an array of brass can provide? Trumpeter Rodney Marsalis and the Philadelphia Big Brass will check both boxes when they visit Akron’s E.J. Thomas Hall on Tuesday, December 13 at 7:30 pm as part of the Tuesday Musical series. Tickets are available here.

The band’s holiday mix is wide-ranging: there’s swing, classical, big band, musical theater, carols, and R&B, ranging from Messiah and Nutcracker selections to Silent Night, When the Saints Go Marching In, and a medley from Earth Wind & Fire. Not just any old holiday program, as I pointed out to Marsalis when we spoke last year over Zoom. (The group’s 2021 visit to Northeast Ohio was canceled.)

Jarrett Hoffman: Bringing together different genres is something that’s been intentional about this group from the start, is that right?

Rodney Marsalis: Yes, we do it with all of our programs. We’ve had a chance to test out this holiday program over the last few years. It’s not just Christmas music, but it’s in the spirit of Christmas, so that’s been our goal.

JH: Do you also bring different styles to the Christmas music you’re playing?

RM: Some of it. We do some traditional things, like a singalong at the end. Then some of the other arrangements are written in different styles. There’s one that has a very interesting mixed-meter feel — I think it’s Sleigh Ride. And we do one version of Silent Night with a narrator and a really beautiful story.

One thing I really hope happens during Silent Night — we tell people to turn on their cell phones. The lights are down, and we have them turn on the flashlight function on their phone. It’s a really nice moment, really fun. And we learned the hard way — like I said, we’ve tested this program out a few times. I think one year we asked everyone to download a candle app. That didn’t work as well (laughs). 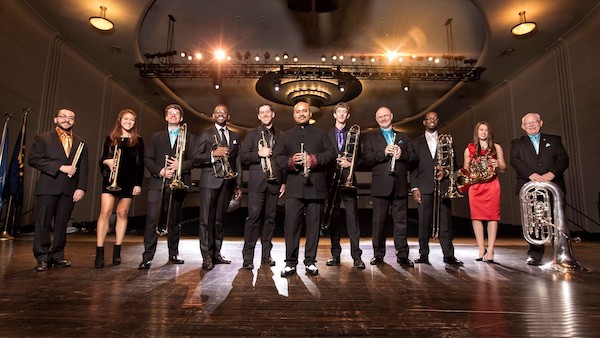 JH: We talked about how bringing together genres is a big element of the group’s philosophy. But also I read this great quote from you in another interview where you’re talking about your experiences playing on the streets of New Orleans, and people coming up really close to you. Your point was about getting rid of the barrier between audiences and performers. How do you make that happen with a performance from the stage?

RM: Most of my career, I’ve played in orchestras — here in the United States and in Europe. And there is sort of a barrier with most formal concerts, which can make the audience feel like they don’t belong there — you know, unless they behave properly. And the funny thing is that there were promenade concerts in Europe in the 1800s where they were already getting rid of those sorts of traditions and making concerts more fun for people.

We try to bring that feeling to our performances. And when you do that, when you make that your intention in every way — where we perform some things memorized, or if we go out into the audience and play so they’re getting really close to the musicians. When you bring that feeling — and it works everywhere, we’ve done it in Brazil, in China, in Europe — there’s a human connection that happens that we first learned about on the streets. And when you do that in a concert hall setting, it just changes the atmosphere of the room. I think it helps people feel like they belong. And by the end of the concert, if you’ve done it properly, you feel that from the audience. It’s an amazing thing.

JH: I wanted to ask about two particular pieces where you’ll be the soloist: a concerto by Harry James [1916-1983], and then Can’t Help Falling in Love, where you play flugelhorn. They’re pretty different in what they require from you.

Harry James was this virtuoso trumpet player. If you asked the trumpet players of his time who was the best, they’d all talk about Harry James. And in this piece, he takes some classical elements — very challenging things like Flight of the Bumblebee — and he combines them with jazz elements, the big band sort of sound, all condensed into this three-minute piece. So that’s why it’s on the program, because it fits in with the theme of combining genres.

It’s the same thing with the Elvis, Can’t Help Falling In Love. We play it in a Baroque style, and it works perfectly well. It’s a beautiful melody — tying into that idea that genre isn’t really the thing that matters, it’s whether you’re making a connection with people.

JH: There are a couple New Orleans jazz-style pieces on the program, When the Saints and Closer Walk — things that might be played in Second Line. And I don’t know if this is really a connection, but I thought of you losing your cousin Ellis [Marsalis] to COVID. I know he’s the one who gave you the advice to start this group.

RM: It was one of the unexpected losses for us with COVID. He’s such a huge figure in our family. His influence on my mom — he kind of took her in, showed her the arts, took her to museums and concerts. And he’s the one who told her I should play trumpet. I was five or six years old, and he said, “Trumpet has a lot of variety, he can play a lot of different styles.” Which is kind of funny — here I stand almost 50 years later and that’s basically what I’m doing.

I used to play with the San Diego Symphony — and it’s hard to get an orchestra job. So I achieved that, but I didn’t feel musically satisfied. And I’d call Ellis, because that’s what we always did when we were kids — when we had a problem, we’d go and ask Ellis. My mom and I would literally get in the car, drive over there, and just ask.

So I’d call him and I remember him saying, “You need to start your own group.” And at that time it seemed a weird thought. Because you can get a full-time orchestra job and stay there for the rest of your life. But I never forgot that notion. I played in the Barcelona Symphony for a little bit, but when I came back to the United States, that’s when I followed his advice. And that’s why the group exists today.