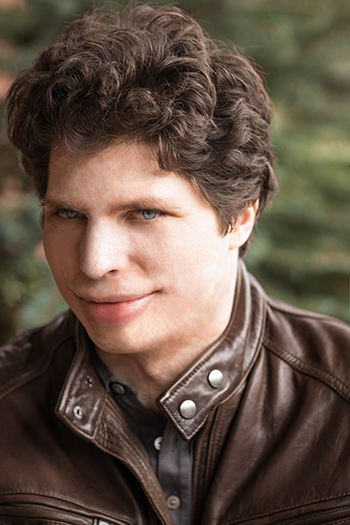 A highlight of last summer’s Cleveland Orchestra concerts at Blossom Music Center was Augustin Hadelich’s performance of Dvořák’s Violin Concerto. On Wednesday, March 28 at 7:30 pm at E.J. Thomas Hall, the 2018 Musical America Instrumentalist of the Year will return to the area as soloist with the Orpheus Chamber Orchestra.

Presented by Tuesday Musical, the program will include Irving Fine’s Serious Song (lament for string orchestra), Schubert’s Rondo in A for violin and strings, Haydn’s Violin Concerto in C, and Tchaikovsky’s Serenade for Strings. A pre-concert talk by Akron Symphony bassoonist Coltan Foster begins at 6:30 pm. Tickets are available online.

“The Haydn Concerto has been one of my favorite classical pieces to play for a long time — I’m in love with it,” the 33-year-old said by telephone from Vancouver, where he was performing Bernstein’s Serenade with Bramwell Tovey and the Vancouver Symphony. “I think the Haydn is neglected — people pass it over for the Mozart concertos. But it’s witty and musically interesting. It has a slow movement that is incredibly beautiful.”

The violinist said that unlike the Mozart concertos, the Haydn has a Baroque feel. “Although we aren’t using one for this concert, it’s often performed with harpsichord. But the instrumentation wasn’t so strict in those days — it all depended on what was available. It’s a wonderful piece and in the last few seasons I have played it once or twice somewhere. It’s usually combined with another work like the Adès concerto.”

For the Akron performance, the Grammy winner will combine it with Schubert’s Rondo in A. “When I was brainstorming with Orpheus about works for violin and strings I thought of this. I played it a lot growing up. It’s really charming and I’ve always had a soft spot for it.” Hadelich said that while Schubert wrote a number of pieces for violin and strings, this is the only one that is ever played. However, looking at the score, it is difficult to say whether it was intended to be played with a large orchestra or quartet.

“He wrote the piece for his brother and stylistically I think it sounds a lot like Mozart. When I was growing up you couldn’t find a good recording of it, but now it occasionally gets put on anthologies. It has Schubert’s ease of writing. You can tell that he sat down and ideas started pouring out of his head. He could always write beautiful music out of nowhere. He never wrote a development — maybe he thought they were boring — so whenever you expect to find one he just brings in another melody, and since it’s Schubert, I’ll take it.”

The violinist looks forward to reuniting with the conductor-less Orpheus Chamber Orchestra, especially with the Haydn and Schubert, both of which were written at a time when the concertmaster led the orchestra.

“The last time I worked with them, the thing that impressed me so much was how great they are at the rehearsal process. When you have thirty people, and each one of them has their own taste and opinions about the music, to bring all of those together into something unified is amazing. They have a system where each piece has artistic leaders. So even though people are speaking up and sharing their ideas, when decisions do need to be made those players take the lead. This enables everybody to feel artistically satisfied that their ideas are being heard. But at the same time, it never gets chaotic, although rehearsals do take a little longer. When you have one person making all of the decisions, things happen faster — but this result is wonderful.”

Hadelich enjoys writing his own cadenzas for his concerto performances, many of which are available to download as a PDF on his website. He pointed out that in Haydn’s time, violinists often improvised their cadenzas, but for some reason that tradition stopped. He began writing his own for concertos by Haydn and Mozart because he was not satisfied with the ones that were available.

“Most of them were extremely romantic — for example the Joachim cadenzas sound like Brahms. Of course, any that I write will also be in a different style, but they are more personal. When I’m writing a cadenza I learn so much about the piece and I find that the next time I play the concerto I play it a little bit differently — not only have I played that material, I have also composed with it, so I become more aware of the composer’s process. It’s always very interesting and I have a good time with it.”

Hadelich does not stop with classical concertos: his writing of cadenzas extends to Brahms and Paganini. “The Brahms doesn’t have an original cadenza so I wrote one about a year ago, but that was my most ambitious project. Around that time composers started to supply their own cadenzas. Perhaps they didn’t trust violinists, having heard things that were in bad taste — ‘I’d better write my own because who knows what people will do.’ I also keep changing mine so every couple of years I’ll replace the PDF. What seemed like a great idea ten years ago begins to sound a little silly to me — but I haven’t changed the Haydn in a while.”

For Hadelich’s latest recording, Nicolò Paganini: 24 Caprices for solo violin on Warner Classics, he created an animated video for #17 to coincide with the album’s release. Click here to view Fantasia dei Gatti. 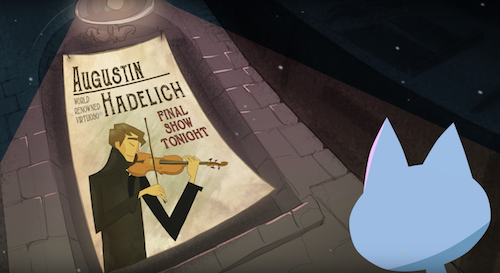 “I think the piece sounds a little bit like cats meowing, so I had the idea that I could be playing it for cats and speaking their language. It was a vague concept and sounded so silly that I didn’t tell too many people about it. But in 2013 I found the director Paul Glickman and the animator Tam King who I worked with. The animation took a little less than a year, but the preparation to get to that point took about four years — from discussing the concept to making drawings and creating the storyboard.”

It’s been fun to see the reactions. Hadelich said that people have immediately asked when he’s going to do the next one. “People watch so many cartoons and animated movies, but they don’t realize how difficult it is to make them — especially if the animation is made by one person instead of in a studio with hundreds or thousands of people.”

The violinist said he was lucky to work with people like Paul Glickman. “He had flashes of genius where he came up with the funniest little gags. His ideas were pretty wild. And Tam King’s drawings have so much character and wit. When I started I had no idea what it would be like because I had never done anything with animation, but it was a lot of fun.”

The Cleveland Orchestra — or at least half of it — marked Valentine’s Day with a straight-through, 50-minute concert led by Belgian early music guru Philippe Herreweghe. The February 14 performance, marketed as a romantic evening of orchestral classics, played to a packed house (marketing works!). END_OF_DOCUMENT_TOKEN_TO_BE_REPLACED

Music is said to be a universal language, but it does speak with different accents. When you’re playing music by Jean Sibelius, it’s helpful to have a Finnish conductor on the podium, which is what made Susanna Mälkki’s pair of Cleveland Orchestra concerts so lucid and communicative earlier this month. END_OF_DOCUMENT_TOKEN_TO_BE_REPLACED

END_OF_DOCUMENT_TOKEN_TO_BE_REPLACED

Today’s touring string quartets hew to so uniformly high a standard that it’s often little individual touches that make ensembles stand out. The Polish musicians who make up the Apollon Musagète Quartet showed up at Plymouth Church in Shaker Heights for their debut on the Cleveland Chamber Music Society series on February 4 in matching plaid suits and black shirts. And jettisoning their jackets, they played standing (except for the cellist). END_OF_DOCUMENT_TOKEN_TO_BE_REPLACED