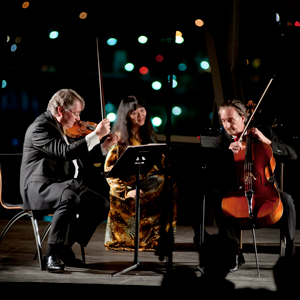 The Piano Trio With No Name (pianist Wu Han, violinist Philip Setzer, and cellist David Finckel) launched their most recent touring project — eventually to include all six of the Beethoven trios — with a brilliant performance on the Tuesday Musical Series at E.J. Thomas Hall in Akron on March 31. They’ll be back next season to finish the job.

The three busy musicians, who have played together in various combinations for years, get together regularly as a piano trio to explore the music of specific composers. Having played their way through Schubert, Dvořák and Mendelssohn, they’ve been working up to tackling the Beethoven trios (no mean feat!) and the results, judging from this first concert that included two works from opus 1 and the late “Archduke” trio, are worth the wait. Wu Han, Setzer and Finckel combine their individual talent into precise, expressive and revelatory ensemble playing so engaging that even such a lengthy program as last Tuesday evening’s fairly breezed along.

The first half was devoted to two contrasting works from Beethoven’s opus 1 — a rather misleading reference, because the composer had already accomplished a lot before he gave his first three piano trios a catalog number. At the time, Beethoven was a young pianist-composer intent on making his mark on the music scene in Vienna. These three works made up a portfolio documenting both the emotional range he was capable of as a composer and his impressive prowess as a pianist.

Channeling Beethoven definitely put Wu Han in the hot seat, but her playing was uniformly dazzling both in the cheerful E-flat Trio that began the program, and in the darker, stormier C-minor work that followed. Smiling beatifically and checking in frequently with the other players, she was clearly the backbone of the ensemble. Finckel exchanged meaningful glances with his colleagues even when he wasn’t playing, acknowledging important moments in the score as though he had written them himself. Setzer was all concentration and business, but entirely expressive and masterful in his playing.

The second half of the evening was devoted to Beethoven’s op. 97 Trio in B-flat, a work of symphonic dimensions named for his patron, the Archduke Rudolph. Here, a more settled-in Beethoven was in evidence, a composer with nothing more to prove, who could spin out long, elegant melodies from minimal materials while still poking some fun at musical forms and sensibilities. (Were those bird calls? Was that a tavern song?)

The trio gave the “Archduke” a confident, magisterial reading full of delicious detail. A warm ovation demanded an encore. After Finckel disappeared momentarily to fetch his iPad (Wu Han had played from hers all evening), the trio gave the audience far more than its money’s worth with a bonus performance of the slow movement from Mendelssohn’s D-minor piano trio.

Before the concert, Tuesday Musical’s executive director, Jarrod Hartzler, announced the 2015-2016 concert lineup (see the separate article for details). Fans of Wu Han, Philip Setzer and David Finckel should circle Tuesday, October 27 in their calendars, when the ensemble will return to play Beethoven’s opus 1, no. 2 and opus 70 trios.