Live music was sprinkled into each evening in the form of solos and duos, but the bulk of this year’s JazzFest was a series of videos recorded in July at Cuyahoga Community College’s Mandel Theater. Despite the wide spacing among the players — a precaution against COVID-19 — chemistry was tight, and the atmospheric lighting drew you in.

The schedule was arranged to emphasize variety, and most bands played only a single piece in one night. Stylistically, there was plenty to hear, from blues to Latin jazz, modern to throwback, wild to smooth, and all types of bandleaders, from vocalists to keyboardists, percussionists, guitarists, and wind players.

We heard music influenced by politics, like Sunday’s performance of The City, where Orlando Watson’s spoken word covered topics like gun violence and police brutality over the music of trumpeter Dominick Farinacci and his band. On Friday, saxophonist Chris Coles’ Gleam ensemble stood out with Blues 2020, which sampled the words of James Baldwin from his 1965 debate with William Buckley about racism. That was powerful both for the speech itself and for the compositional balance between electronics and instrumentals, neither one ever losing its potency in favor of the other.

We also heard music that was just plain fun. In the eminently funky Happiness on Friday, bass guitarist Walter Barnes Jr. and his band played with a level of energy that most people wouldn’t use up in a decade. And earlier that evening, in Back at the Chicken Shack, Eddie Baccus Sr. made the organ laugh.

A leader in the local jazz scene since the ‘60s, Baccus was followed by some up-and-comers: students from the Tri-C JazzFest Academy performing as the Spirit of the Groove ensemble. Mox Nix began with an impressive dialogue between tenor saxophonist Burton Hall and Farinacci (the group’s director). Later, pianist Jonah Benchek shone with a playful and harmonically adventurous solo. 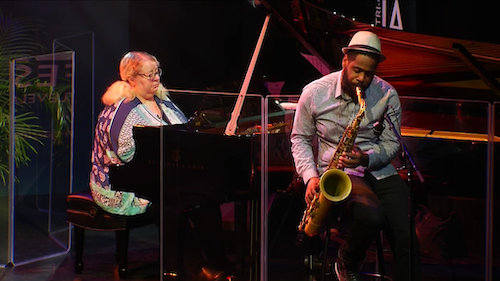 Among the live segments, pianist Jackie Warren gave a mesmerizing performance of Lagrimas Negras on Friday. At first elegant, then frenzied and brooding, she seemed to work herself and her listeners into a trance. Later, and also live, Warren joined two saxophonists, first Bobby Selvaggio and then Johnny Cochran, who showed off a level of stylistic flexibility that gave their performances a compelling structure.

Footage from years past included one gem: a duet between bassists John Clayton and Christian McBride. As their musical conversation escalated, each of them putting the other on the spot again and again with a musical comeback, the look on their faces really said it all.

Each night was slated to go for 90 minutes but wrapped up around the two-hour mark. It was a little long, but considering the number of great performances — way too many to include in this review — maybe it was justified.

Tying all the music together was the superb team of hosts: Dominick Farinacci and JazzFest director Terri Pontremoli, who were joined on Friday by Evelyn Wright and on Sunday by Orlando Watson. Anecdotes, introductions, and conversations were generally easygoing, interesting, and polished — Farinacci in particular could head up his own late night show.

Even when that polish wasn’t there, it was a good thing. Late Sunday night, as the festival came to a close, Pontremoli started to break down with emotion. At the end of the day, that’s all an audience really wants: a genuine human connection. 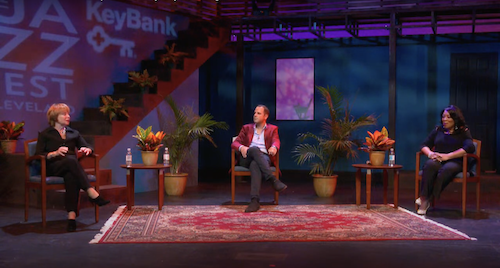 All three nights of JazzFest are available to watch on YouTube.