The act of improvisation — creating a piece of music on the spot — is difficult to describe. “This type of music is not easy to talk about,” bassoonist, improviser, and educator Dana Jessen said during a recent telephone conversation. “There are some improvisers that don’t want to talk about their approach to the process because it feels a little less tangible than other musical genres.”

You can hear Dana Jessen create an in-the-moment composition on Sunday, December 8 at 7:00 pm at Praxis Fiber Workshop during a program titled “Locals.” Presented by the Cleveland Uncommon Sound Project, the evening of improvisation and storytelling through song will also include a performance by Kyle Kidd & Company featuring guitarist Pete Saudek. The event is free.

Jessen holds degrees in bassoon performance from Louisiana State University and the New England Conservatory. As a Fulbright Scholar in 2008-09, she studied in Amsterdam, and earned a masters in contemporary improvisation at the Artez Hogeschool voor de Kunsten in Arnhem, Netherlands in 2011.

Two years earlier, Jessen created the New Music Bassoon Fund, a commissioning consortium dedicated to the creation of large-scale works for bassoon. The first commission was Rushes, a 55-minute work for seven bassoons by composer and Bang on a Can co-founder Michael Gordon. Jessen has performed the piece at Nashville’s OZ Arts Series and Knoxville’s Big Ears Festival. She has also appeared on the Out of the Box Concert Series in Philadelphia, performing solo improvisations as well as works for bassoon and electronics.

During our conversation Jessen often talked about creating your own sound world, and the never-ending quest to expand on that world. She is also fascinated to hear how audience members engage with that. “For example, sometimes I’ll only play on my reed,” she said. (The bassoon uses a double reed). 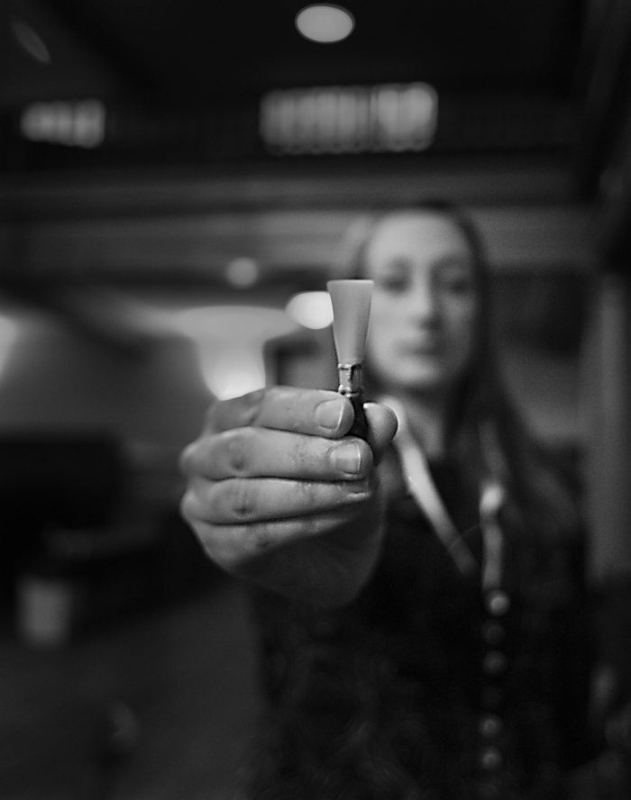 “Listeners often want to relate it to something that they already know, and I’ve often had people say, ‘Those bird sounds that you were making are interesting.’ It’s funny because I never started playing the reed with the intention of making a bird sound. I did it to use the reed as its own instrument. I’ve also had people say things like, ‘At one moment you sounded like a beast and another time it was serene, like a voice.’ I find it fascinating to talk with listeners after the fact because I don’t go into an improvisation wondering what they’re going to think of this.”

Jessen noted that the sound of a bassoon may not be on people’s radar screens in the way that a piano or violin are. And if one does know the instrument, her playing style is very different from the stereotypical orchestral bassoon. And while she may not be sure what her performance will yield, listeners can rest assured that there will be no Peter and the Wolf excerpts thrown in.

The bassoonist looks forward to playing in the pleasing acoustic of Praxis Fiber Workshop. “It’s a great space with a nice reverberant acoustic,” she said. “Solo improvising is hard — it may be the most difficult thing you can do as a wind player — but with such a resonant room, I’m excited to go into it. The space is going to support all the things I hope to convey.”

In a 2018 interview with this publication, Jessen said that during the three years she lived in Amsterdam, she immersed herself in the city’s improvisation scene. “I had some incredible mentors who pushed me to explore my instrument in ways that traditional classical teachers had not. I was also studying with people who were not bassoonists.”

As an educator, Jessen is happy to have the opportunity to pass along her knowledge and excitement about improvisation to younger generations. “My contract at Oberlin is now split between professional development and my faculty post as associate professor of contemporary music and improvisation.”

During the spring semester, she will begin offering a class titled Approaches and Philosophies in Free Music. “The course is a look at various writings and philosophies of playing freely improvised music or spontaneous composition. It meets twice a week — one day is a lecture, listening, and analysis, and the second is putting that into practice. My goal is for the students to begin developing their own personal languages and sound worlds as well as listening and reacting to them. These are skills that are important in an improvising setting.”

Jessen said that enrollment in the class is full and has a waitlist of students to get in. “I think it’s a testament to the interest in the types of music that we have on campus, and it’s nice to see that.”

Like most musicians, Jessen’s life is a balancing act. “Last week I was on the East Coast with my ensemble Splinter Reeds, and the last three days here in Oberlin have been straight through from 9:00 am until after 6:00 pm with teaching and meetings. But that’s the payback for being able to get away and perform.”

END_OF_DOCUMENT_TOKEN_TO_BE_REPLACED

Supported by engagingly, yet simple staging by Cara Consilvio, a well-prepared cast of singers told the archetypal story of Cinderella with charm and flair. Framing the production was  a sparse but colorful set and wonderful lighting by Dave Brooks. END_OF_DOCUMENT_TOKEN_TO_BE_REPLACED