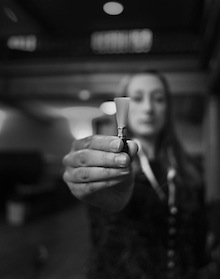 On Saturday, April 21 at 8:00 pm at Historic St. John’s Episcopal Church in Ohio City, the bassoonist will join bassist Jaribu Shahid and pianist Josh Harlow for a performance of free improvisations. Presented by the Syndicate for the New Arts in cooperation with New Ghosts, the free concert will also feature improvisation by the newly-formed trio of saxophonist Bob Bucko Jr., violinist Alex Cunningham, and drummer Alexander Adams.

What can listeners expect to hear? “Probably a lot of sounds that are new to their ears,” Jessen said during a recent telephone conversation. “I’ve never played with Jaribu and I’m really excited about it. He’s a phenomenal bass player who is associated with the Chicago-based AACM (Association for the Advancement of Creative Musicians). He’s played with all the heavy hitters of that organization like Roscoe Mitchell and Anthony Braxton, so I’m excited to get to work with him.”

While Saturday’s performance is a first-time meeting of the trio of Jessen, Shahid, and Harlow, Jessen said they are all versed in the exploratory, adventurous improvised music that is championed by the New Ghosts and AACM. “We have all done this in our own ways in our own different projects, but the three of us will be creating new sounds on the spot.”

Jessen holds degrees in bassoon performance from Louisiana State University and the New England Conservatory. As a Fulbright Scholar in 2008-09, she studied in Amsterdam, and earned a masters in contemporary improvisation at the Artez Hogeschool voor de Kunsten in Arnhem, Netherlands in 2011. Two years earlier, Jessen created the New Music Bassoon Fund, a commissioning consortium dedicated to the creation of large-scale works for bassoon. The first commission was Rushes, a 55-minute work for seven bassoons by composer and Bang on a Can co-founder Michael Gordon. Jessen recently performed the piece at Nashville’s OZ Arts Series and Knoxville’s Big Ears Festival. Earlier this month she appeared on the Out of the Box Concert Series in Philadelphia, performing solo improvisations as well as new works for bassoon and electronics.

How did the bassoonist find her way to improvisation? “I became interested in this music before I figured out how it could work on the bassoon,” she said. “I enjoyed contemporary classical music and the idea of working with composers, but I also liked the experience of going to a concert and watching people create something on the spot, and putting everything they have into an improvisation.”

Jessen noted that when she was in school, there were not a lot of bassoonists practicing the art of improvisation, although that is beginning to change. “It was a challenge for me to figure out what this would mean for my instrument.”

During the three years Jessen lived in Amsterdam, she immersed herself in the city’s improvisation scene. “I had some incredible mentors who pushed me to explore my instrument in ways that traditional classical teachers had not. I was also studying with people who were not bassoonists.”

Jessen said the first step in her learning process was to detach herself from the “rules and restrictions” of the instrument that she had been taught, and approach it as though she was learning it for the first time. “I spent a lot of time figuring out what my language looked like as an improviser, then developing that into something that sounded like me. I think I have a handle on it but I feel like it is an ever-evolving process. Even well-established players are constantly pushing themselves to further their language — I’m thinking of people like Mary Halvorson and Peter Evans, who both continue to expand and explore. So I don’t necessarily see myself as a bassoonist who is doing this, I just look at myself as an improviser whose instrument happens to be the bassoon.”

END_OF_DOCUMENT_TOKEN_TO_BE_REPLACED

Rodgers & Hammerstein’s Cinderella was originally produced for television in 1957 — seven years after the animated Disney film was released — and starred Julie Andrews. According to the Rodgers & Hammerstein website, it was viewed by over 100 million people. END_OF_DOCUMENT_TOKEN_TO_BE_REPLACED

The story line has its origin in an 1855 play and an 1842 farce that Thornton Wilder mined for his 1938 play The Merchant of Yonkers. When that turned out to be a flop, in 1954 Wilder made the crucial decision to re-center the show around the character of the legendary marriage broker Dolly Gallagher Levi and renamed it The Matchmaker. END_OF_DOCUMENT_TOKEN_TO_BE_REPLACED

The Dodero Center for the Performing Arts at the Gilmore Academy in Gates Mills is one feature of an impressive campus. The auditorium is shallow, the stage is deep, and the ensemble played without a shell. Throughout the program, the sound, especially in instruments’ lower registers, tended to disappear. END_OF_DOCUMENT_TOKEN_TO_BE_REPLACED