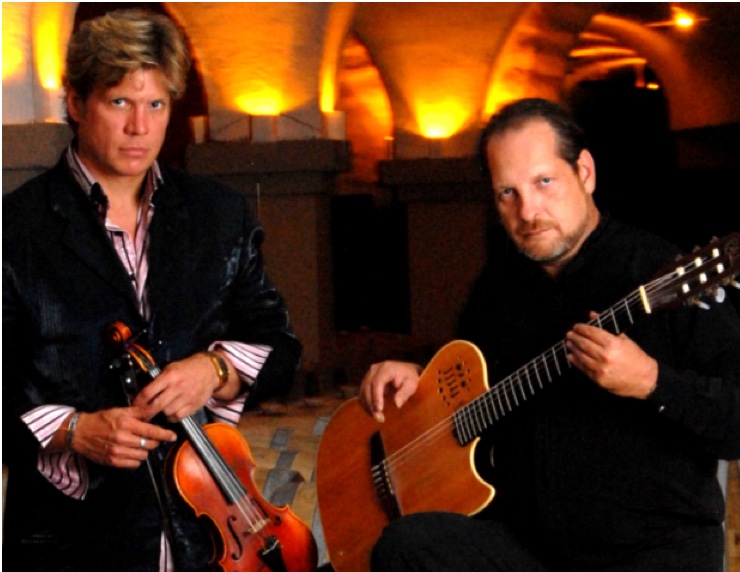 On Friday, May 4 at 8:00 pm at Praxis Fiber Workshop on Waterloo Road in Collinwood, Underground Classical will present violinist Alex DePue and guitarist Miguel DeHoyos in a free concert that will feature classically-hued takes on popular songs, original compositions, and a little bit of fiddling.

“There will be something for everybody, from classical music all the way to the classic rock of the ‘70s, The Beatles, and some show tunes,” DePue said during a telephone conversation. “We do a wonderful arrangement from The Phantom of the Opera that morphs into Santana’s Black Magic Woman.” To hear how stylishly the duo moves from Andrew Lloyd Webber to Carlos Santana, click here, where you’ll also find many videos of DePue’s and DeHoyos’ inventive and engaging playing.

DePue said that combining musical styles in one tune helps to expand audience demographics. “If you include a show tune like ‘All I Ask of You’ from Phantom and end with Black Magic Woman, you’ve got two completely different audiences who would never meet.”

Hailing from Bowling Green, Ohio, Alex DePue and his three violin-playing brothers comprise the popular DePue Brothers Band — Wallace is the former concertmaster of the Philadelphia Pops, Jason is a member of the first violin section of the Philadelphia Orchestra, and Zachary is concertmaster of the Indianapolis Symphony. The brothers are all award-winning fiddlers as well. In 2011, Alex launched The DePue Brothers’ International Fiddle Competition to benefit school music programs throughout his hometown.

What musical style came first for DePue? “I began as a classical violinist. At age fourteen I was playing under the baton of Joseph Silverstein at Carnegie Hall when I was concertmaster of the National Guild Youth Symphony Orchestra. It was about that time that I began to take improvisation to a new level,” the National Fiddling champion said. “Mark O’Connor was my hero and I knew all of his solos on both albums he released on Warner Records. I even got to the point where I could play the solos of the other instruments too.”

DePue credits his classical training with giving him the “chops” to take O’Connor’s fiddling style to a new level. “I took this new sound into competitions and started winning everything,” he said. “And when I apply those chops to Miguel’s Flamenco feel, it turns into a twisted rock-and-roll fusion and is contagious.”

Like DePue, Miguel DeHoyos’ musical sensibilities range from the Classical to the contemporary worlds, and similar to DePue, he comes from a musical family — in Monterrey, Mexico. He entered the school of music at the state university of Nuevo León at age thirteen and gave his first professional concert at sixteen.

How did the two musicians come to meet? “We have a mutual friend who is also my cousin,” DePue said. “It took him nine years to get the two of us to meet. Every Thanksgiving he would show up in Columbus, Ohio and tell me all about this guitarist in Mexico who I had to meet and hear play. I didn’t care, I was in the middle of a tour with Steve Vai. He was also telling Miguel about me. As time went on I found the opportunity between legs of that tour to visit my cousin in Mexico and as soon as I got there he took me to meet Miguel. He was already packing up for the night, and we had to beg him to reopen his case — that’s the last thing a musician wants to do. But he did and it was kismet.”

Yes, you read that correctly. DePue toured for nearly three years with legendary rock guitarist Steve Vai. “That was the result of a flat-out audition,” he said. “Steve held a cattle call and like everything else that happens in LA, you wait for the phone to ring to see if you get a callback, and I did, directly from Steve. The first leg of the tour was in Europe, then we did the U.S. and Canada, then South America. It was like a musical boot-camp — he’s very attentive to detail and he’s a wonderful coach. It was a three-and-a-half-hour show but I never got bored. He kept it musically interesting, and I was just as entertained sitting next to him at show eighty-six as I was with show one.”

When he’s not performing or in the recording studio, DePue teaches select students from around the world via Skype. “Right now I have a student in New Zealand, one in the Netherlands, and one in Maine,” he said. Which musical styles does he teach? “A lot of people see what I do and they come to me and want to be a rock star or want to play in the fiddle contest. But the first thing I show them is the scale system by Carl Flesch. And just like any good teacher should do, I tell them that if you want to get good on your instrument, here are your vegetables. And, if you eat them you will grow up to be big and strong. It’s a daily diet of meditation and focusing on breathing. After the scales we’ll go to the etudes — there will be some Bach — and a piece that is a semester goal to learn. I treat improvisation as dessert.”